I'm All About PADDINGTON 2 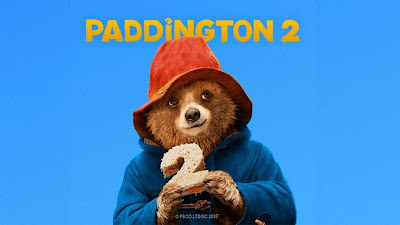 You said this movie was good, but you didn’t tell me this bear was a total mensch, too!

A couple of weeks ago I was having a bummer of a day and was looking for a movie to cheer me up. Remembering the praise our community gave Paddington 2 in the comments recently, I said to hell with waiting until I saw the original (I figured I’d catch up without a lot of trouble) and checked out the sequel. I mean, it has a 100% approval rating on Rotten Tomatoes, so it seemed like a pretty safe bet. To my relief, I loved Paddington 2 and am confident I only have nine spots left for a 2018 top ten list. It would be impossible, I think, for me to find ten more movies I like more by the end of the year. If that does happen, then good for all of us because it means it was a great year at the movies. 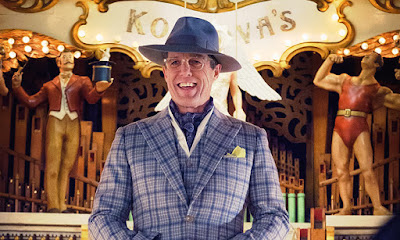 What makes Paddington 2 so great and why are so many critics and audience members rallying around it so much? I think a lot of it has to do with what a surprise it is. I expected the movie to be good-natured and charming, but it’s seriously more than that. I’d put it in the same league as Wes Anderson films like Moonrise Kingdom or The Grand Budapest Hotel, Jacques Tati’s Mr. Hulot’s Holiday and another miracle sequel, George Miller’s Babe: Pig in the City. Everyone brings their A-game in Paddington 2, performance-wise. Hugh Grant, Sally Hawkins and Brendan Gleeson are having the time of their lives, and Ben Whishaw as the voice of Paddington is perfect casting. The sets, production design, costumes and visual effects are tremendous, too. It’s rare for me to be wowed by VFX these days, but I was blown away by the work in this film. Just look at a couple examples here.

• This first clip is a terrific comedic sequence worthy of Mr. Bean and its principal performer is a digital creation. How impressive is that?

• I don’t even know how they did the work in this scene with its layers of one VFX style/element inside a different, but equally impressive one. It’s a moment between Paddington and his Aunt Lucy. Their whole dynamic made me cry happy tears. It’s wonderful.

Recently, Patrick and I wrote an article on movie worlds we’d want to live in, and the neighborhood of Windsor Gardens in the Paddington movies is worthy of addition to my list. It is so homey and inviting. When I watched Paddington 2, I wanted to jump through the screen and slide down the staircase at the Browns' house on my way to the kitchen for coffee, toast and marmalade. There are shots where the camera pulls back and shows the home like a doll house, and it’s just one example of the visual invention on display throughout these films. Even the prison in Paddington 2 looks like a great place to live. Everything about this movie is classy, witty, cute, charming and pleasant, just like its title character. Paddington, the bear, is the best. I love that he’s not without flaws (he’s very naïve), but underneath that is just a genial good nature where he just wants to be helpful and he sees the good in everyone unless they prove to him otherwise. The movie reminded me a lot of when you’re a kid and had stuffed animals (or, in my case, a blanket) and you give it a personality and inner life that was half joking and half completely sincere. Watching Paddington 2, I felt like Anton Ego at the end of Ratatouille when he tries the titular dish and reconnects with his younger self.

I liked Paddington 2 so much that I delayed seeing the original for about a week because I knew I was going to be sad when I did watch it and had no new Paddington content to enjoy. I didn’t think the first one was as good as the sequel (it’s a 3.5/4 instead of a 4/4), but you could tell it’s the type of movie where all the right elements were put in place and it was ready to lift off the next go-around. Nicole Kidman plays the first Paddington’s villain, a taxidermist who wants to kill and stuff Paddington, and that makes it less fun than it just being the bear trying to break out of prison to clear his name like in the sequel. Plus, Hugh Grant is so funny in Paddington 2 as a fallen actor (who talks to his past roles in character as if they’re his multiple personalities) that the more serious Kidman can’t quite match it. I also wasn’t crazy about some of the music stings in the first Paddington, like “I Feel Good” by James Brown, which I thought was so past the point of cliché I didn’t even know it could still be in a movie. Those minor gripes aside, both movies are a blast and I had a smile glued on my face throughout the duration of both installments (and a third has been greenlit)! Paddington’s my dude.

Cheers to writer-director Paul King and producer David Heyman (of Harry Potter and Juice fame) for this great series. Don’t be like me and overthink looking like a weirdo going to see Paddington 2. I went to a 9:25pm show on a weeknight and it was just me and two other adults all having a great, giggly time. Check it out for yourself.
Posted by Patrick Bromley at 5:00 AM