Five Movies We Wish We Could Live In

I guess you could say we dig on multiverses.

Adam: My first pick for a movie I wish I could live in is the original The Fast and the Furious. While I’m not interested in cars, I’m super into car culture with its delicate machismo and garage tans. I think my tendency to want to say “yo” and “brah” all the time would help me fit in. Also, these movies could use a plucky comic relief guy like me; like a pun Roman. I want to have Coronas with my boys Dom and Brian. Kick it a nickel and race a souped up 2003 Nissan Skyline. Go to barbecues where we talk about what our code is. It’s a super emotional subculture where you feel like your life means something important. What’s your first pick, yo?

Patrick: I might be miserable living in the Fast and Furious world. Like, I don’t even feel qualified to work at the Quik Save where they all buy their Corona. I would be immediately identified as an imposter and teased more mercilessly than li’l Scotty Eastwood in The F8 of the Furious. I just don’t think I could take that kind of rejection.

The movies I always say I want to live in are the Corman Poe films that AIP produced in the 1960s. I don’t want to dress in fancy collars or be party to a murder or anything like that, but it might be fun to hang out with Vincent Price while he goes crazy, thinking he’s being haunted by the ghost of a former lover. Most recently, Crimson Peak pushed a lot of those same buttons because it’s beautiful in the same gothic way. Plus, I could be Jessica Chastain’s rebound dude when her brother passes her over for Mia Wasikowska.

Adam: I’m actually Mia Wasikowska’s rebound dude (she misses so many jump shots), so you made a good decision. Plus, I can easily see you vamping around an old mansion in front of a giant Kristen Stewart painting where her eyes are moving. 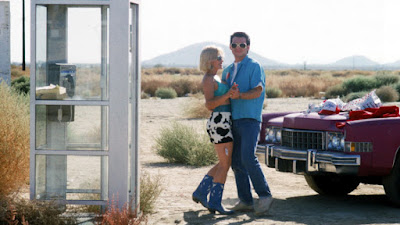 My next choice is something I wasn’t even expecting to choose, but I caught the last hour of Top Gun on cable last night and couldn’t resist. I would like to live in a Tony Scott movie pre-Man on Fire. I don’t know which one (I know which ones I wouldn’t… The Last Boy Scout for example) so let’s say True Romance. I don’t want to hang out with Gary Oldman or anything (or get shot), but I would love to know that I look crazy photogenic (because everyone in first-half career Tony Scott films looks the best they ever have in a movie) and have friends like Christian Slater, Patricia Arquette and Michael Rappaport. It doesn’t hurt that Tarantino dialogue would come out of my mouth by the sheer placement of me being there.

Patrick: True Romance is a great call. Everyone looks so great in that movie. Tony Scott manages to make Bronson Pinchot fuckable. Even James Gandolfini is thin and handsome! My only concern with living in a Tony Scott movie would be that it would be hard to breathe with all the smoke he uses to light his sets. I have to assume everyone is in a coughing fit immediately before “action” and immediately following “cut.”

My next pick is Anna Biller’s great The Love Witch from last year, again for purely aesthetic reasons. It’s not even my aesthetic, really; I would look ridiculous and out of place in the world she creates, but everyone and everything just looks so incredible. There’s something super tactile about the beauty of that movie, too, and I feel like the only way to fully enjoy the experience is to actually enter the movie, Danny Madigan-style. I’m sure I would end up drinking poison or something, because every time I think about living in any movie it ends with me dying.

Adam: I think you would fit into The Love Witch if you bought a tweed blazer. That movie is beautiful. I’d even settle for working at the renaissance faire (as a bugle boy preferably) in The Love Witch. 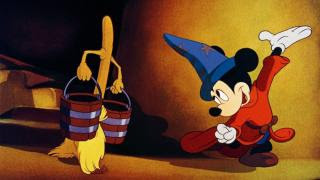 My next pick is Fantasia. I would like to live in this movie for many reasons: a) a dramatic score to me just doing normal things; b) I can see what I look like in 2D animation and see the world in this way; and c) have my life consist of deeply emotional short vignettes. Would it be a drawback to never talk? Yes, but I can live with that I think. On second thought, maybe not Fantasia, but a Disney 2D animated movie of some sort - A Goofy Movie, Lilo & Stitch, etc. Something upbeat. Or I could just switch animation studios and go into The Pagemaster and hang out with Macaulay Culkin. I feel like you might be a better candidate to be a Pagemaster, though, because you read more than I do. Bottom line: I want to live in a 2D animated world. Knowing my luck, I’ll screw it up and end up in Barnyard or Sherlock Gnomes. Have you seen the trailer to Sherlock Gnomes? There’s a part where Sherlock Gnomes is looking for his boat and says “Where’s the ship? It’s gone.” (or something like that) and another character replies “No ship, Sherlock.”

Patrick: Weird that parents might bring their families to that movie when it would be so much cheaper to just punch your kids in the face. Fucking Sherlock Gnomes. I can’t stand it when movies start with a title and work backwards, but it’s even worse when it’s a shit stupid title like Sherlock Gnomes.

I would totally see a 2D animated movie with you as the star. I would prefer it be something like Heavy Metal, though, with you as the Den character. You should do your own voice, though. Because John Candy is dead.

I don’t think I would mind living in a Beach Party movie. It’s always sunny and beautiful. Everyone is so happy and innocent and they’re constantly bursting into song. Stevie Wonder shows up to jam. Dick Dale and the Del-Tones are the house band. I could just hang out in the background and be known as Guy Who Keeps His Shirt on in the Water.

Adam: You’d be all “Hey everyone, let’s do the Dad Bod!” (cues musical number) 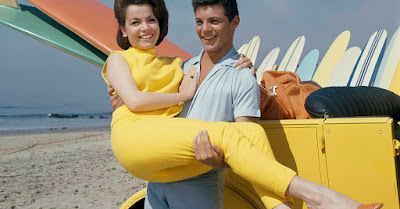 My next pick is Hogwarts in either years one, two, or three before the real shit goes down. I always felt bad for those kids that their years at Hogwarts (which is magical and awesome) was compromised by Voldemort and his minions. They should have purposely failed so they could get held back and enjoy their time in school. Since I’m a grown-up, I wouldn’t want to be a student, but I think I could totally be a substitute teacher/Quidditch coach/faculty advisor of the League of Jewish Wizards & Witches. Instead of that bullshit Fantastic Beasts nonsense, why can’t there be a sitcom of just kids being normal at Hogwarts, like Saved by the Broom?

Patrick: Do you think Neville Longbottom is the Screen of Hogwarts? And does that make Luna Lovegood the Violet Bickerstaff? How many layers deep of nerdiness can we go here?

I don’t think it would be the worst thing to live in Fast Times and go to Ridgemont High. I mean, except for the casual racism and occasional abortion, it seems like a fun place! It seems like a real high school in a lot of ways. The ‘80s music is great. There are flawed people, but no overtly terrible people. That mall would be a good hangout: it’s got a movie theater and a pizza place that employs Jennifer Jason Leigh AND Phoebe Cates? Why would I ever need to go anywhere else?

Adam: No kidding. That pizza place is fantastic. You can also buy concert tickets from Damone while you’re there! 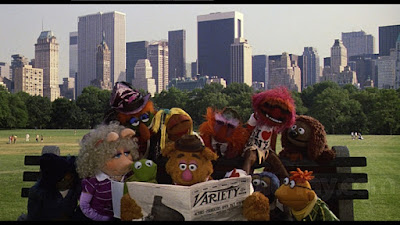 Patrick: I love the idea of trying to figure out which of us on the site would be which Muppet, but I feel like the game breaks down as soon as I try to assign who would be Rob because I can’t decide which Muppet is the most fuckable. But I think the real appeal of living inside Muppets Take Manhattan is that everywhere you turn, every minor interaction you have, you’ll be face to face with some famous guest star. Doing some quick shopping at a department store? Hey, it’s Joan Rivers! (RIP) Need to borrow some skates? There’s Gregory Hines! (RIP) Got a Broadway show you need produced? Ask Art Carney! (RIP) Ok, now I’m just upset.

My last pick is probably Streets of Fire. There are a lot of filmmakers who shoot worlds in which I would love to live -- people like Michael Mann or Jack Hill -- but they’re all pretty dangerous and I am, how do you say, a pussy. Walter Hill is one such filmmaker, and I think I might actually be able to survive in Streets of Fire. I love the backlot look of the movie’s world and the way it mixes a bunch of genres and decades that push all of my buttons. And if Willem Dafoe’s ducktail ever comes around, I would gladly pick up a pipe and join a posse...as long as I’m, like, way in the back. I’m more of a back-of-posse guy.