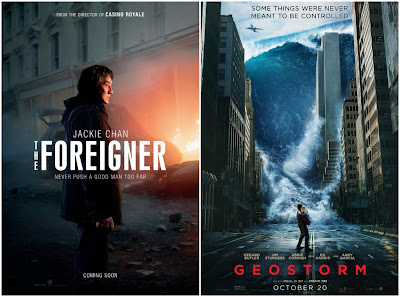 Please help me. I don’t even know what’s happening anymore. 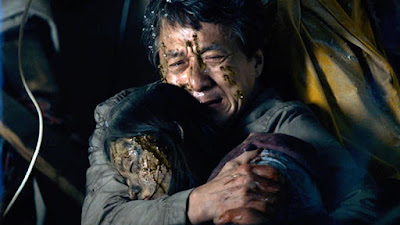 Buried deep inside the sixteen movies The Foreigner wants to be is a solid three-star effort from veteran action director Martin Campbell, whose reliable — if largely indistinct — filmography culminated in the ultimate James Bond adventure Casino Royale in 2006. Re-teaming with his other Bond, GoldenEye’s Pierce Brosnan (cast against type as a sleazy and conniving villain) and recruiting martial arts legend Jackie Chan (cast against type as a desperate and grieving father), Campbell delivers a slick and earnest adaptation of Stephen Leather’s 1992 novel The Chinaman that never quite manages to get off the ground. It’s not that The Foreigner is messy or unfocused in the traditional sense; it’s that it seems bored by the would-be potboiler yarn it’s been tasked with spinning and decides to lay said yarn flat on the ground and take a nap, instead, ultimately delivering its narrative with all the zest and enthusiasm of your local FedEx driver. Despite all the complex political intrigue, The Foreigner never asks any more from its audience than a reasonable amount of its polite attention.

When an IRA splinter group takes credit for a deadly bombing in central London, Northern Ireland’s deputy First Minister Liam Hennessy (Brosnan), himself a former IRA operative, is tasked by Her Majesty’s government with bringing the killers to justice. He works with old cronies and compatriots behind closed doors to get rabble-rousers in line while maintaining a strong public face condemning the tragedy. That face doesn’t fool Chinese Nuang immigrant Ngoc Minh Quan (Chan), however; the Special Forces operative-turned family man knows there’s more to Hennessy than he’s letting on, and he’ll stop at nothing to avenge the daughter he lost in the explosion. If you’re angry at me for spoiling the fact that the humble Chinese restaurant proprietor was once a killer, I should remind you that he’s played by Jackie Chan, the 63-year-old action legend who can still absolutely Get It. Quan’s relentless hunt for for the bombers’ identities (which he punctuates with his own series of bombs and traps) drives Hennessy into hiding while the latter man’s ever-shrinking circle of allies threaten to expose his deceits. 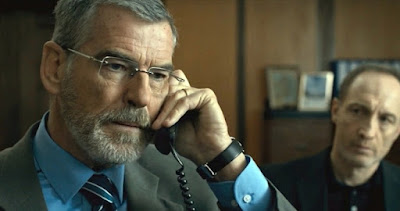 Jackie Chan provides The Foreigner with a few moments of thrilling action and genuine pathos, but his confident and understated performance is diluted by David Marconi’s (Enemy of the State) by-the-numbers screenplay, which is padded-out with repetitive plot threads that fail to escalate. Pierce Brosnan — who, frankly, has always struggled to convey true gravitas — does what he can as a two-faced bureaucrat whose quest to neutralize Quan without resorting to the cold-blooded murder that defined his youth is never given enough latitude to coalesce properly. His chess pieces (including other politicians, soldiers, terrorists, and his vengeful wife) move more or less independent of his influence, leaving Brosnan standing at various desks and scowling at cell phones for most of the movie. This inertness really neuters The Foreigner’s efforts to create a thematic bridge between Hennessy and Quan, two outsiders deeply scarred by ethnic warfare and searching for peace. If anything, Quan’s simplistic ruthlessness is celebrated as the most effective solution to a complicated problem. At least he’s fun to watch. 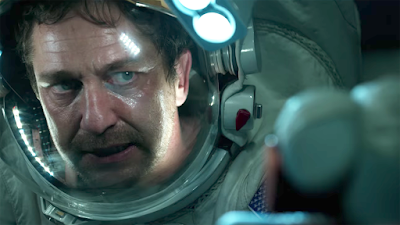 Follow me, if you will, on a hypothetical: Sometime in 2017, a group of CG effects artists are tasked with destroying the world. “What if a tidal wave hit Dubai?” a producer asks. “What if a flame tornado erupted in Hong Kong? What if there was hail in Rio? What would that LOOK like? You know, just for fun?”

Cheap! It would look really cheap! And though there’s no reason to expect the directorial debut of ‘90s mega-producer Dean Devlin (Independence Day, Godzilla ’98) to be anything but a schlock buffet, Geostorm finds a way to be profoundly bad and endearingly weird at the same time. That could be the bonkers script, co-written with Devlin by TV veteran Paul Guyot. It could be the notorious reshoots, helmed by director Danny Cannon and writer Laeta Kalogridis. It could be the clumsy environmentalist message delivered by Talitha Bateman as Hannah, the Precocious Child from a Shane Black movie. Really, though, it’s that Geostorm is simply a B science fiction movie on a blockbuster scale, a goofy and incompetent mess of meaningless explosions and hurried ADR that has just enough charisma to be fun. In the classic tradition of 1950s sci-fi, Geostorm’s characters spend most of their time standing in circles, pounding their fists on desks and watching a clock tick ominously toward a disaster that the film can’t really afford to show us. If that’s your bag, then welcome home.

In the year 2019, Gerald Butler and his team of international space climatologists have built a complex web of satellites around the Earth (colloquially called “Dutch Boy,” after the kid who stuck his finger in the dam to stop the flood) to shield us from the weather disasters brought on by climate change. Though is work is revolutionary and completely fail-proof, Butler is fired for reckless insubordination and replaced by his little brother, Jim Sturgess (Across the Universe, Cloud Atlas). Sturgess, who is having a secret romance with Secret Service Agent Abbie Cornish (Sucker Punch), is supervising the U.S.’s handover of Dutch Boy to an international council on the eve of President Andy Garcia’s re-election. But when a small village in Afghanistan is found inexplicably frozen solid and a scientist with damning evidence is mysteriously killed, Secretary of State Ed Harris commissions Sturgess to find the flaw in Dutch Boy and save the day. Guess who Sturgess chooses to lead the investigation? 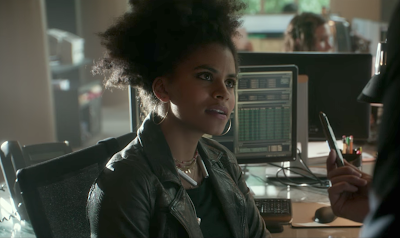 I’ve been thinking a lot about what made The Foreigner so boring and Geostorm so much fun. It’s a fine line, for sure, dependent largely on personal taste. They’re both at about the same level of coherence and originality, but I think maybe I side with Geostorm because it has a sense of humor about itself. For instance, the awesomely-named Zazie Beetz (Atlanta) as Dana, a sexy nerd hacker who seems to be wing-manning for Sturgess while also nursing a bit of a crush on him. She loves Chipotle and adventures, and she’s my favorite part of the movie. Sturgess, by the way, takes the entire movie on his back, knocking Butler around, palling about with his niece, and hatching a plan to rob the president in the shower. His display of this vast range of emotion really says, “I want to be an actor.” As for Butler, he spends most of his time against green screen doing sound-stage teleconferences in that space pod from Man of Steel. He’s fine. Geostorm is fine. Ed Harris has a rocket launcher at one point, and Cornish kicks some ass in a pantsuit. What more do you want?
Posted by Patrick Bromley at 12:00 PM