Is there anything more fun than tumbling down a new rabbit hole?

I first became aware of Massacre Gun during a trip to Barnes and Noble to take advantage of their biannual Criterion Collection sale. I picked up Massacre Gun, thinking it was a Criterion title because of its distinctive clear case. Turns out, Massacre Gun was released by Arrow Video in 2015 (although our story will lead back to Criterion.) The Massacre Gun package said that the disc was a special edition limited to 3,000 copies. “Hey!” I thought, “There are 7 billion, 530 million people on this Earth. That means only one person in 2.5 million will be able to own a copy of Massacre Gun. I believe I should be that one person.” Plus, could YOU pass up the 1-in-2.5 million chance to own an obscure film titled Massacre Gun? If you are a regular reader or listener here at F This Movie!, my guess is no.

No, you could not. 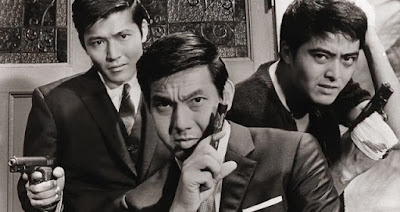 The movie is terrific, certainly one of the best blind buys I have ever made. It was gritty and violent and cool and hip and funny. It opened up for me a sub-sub-subgenre about which I was completely ignorant: 1960s Japanese crime films from the Nikkatsu studio directed by Seijun Suzuki and Yasuharu Hasebe. Hasebe started as Suzuki’s assistant and then graduated to his own films. After doing a little digging on the Interwebs, I learned that this subgenre included three Criterion titles that I had previously ignored: Branded to Kill, Tokyo Drifter, and Nikkatsu Noir, a collection of five films from this period.

Why did I ignore these titles? Haven’t I learned to trust Criterion because they know what they are doing?

Seems that I discovered this gem—with the purchasing and viewing and loving and delighting—at the exactly the right time. In the spirit of serendipity that often accompanies these special life moments, next week Arrow Video is set to release Seijun Suzuki: The Early Years, Vol. 1 – Seijun Rising: The Youth Movies, a collection of four films. I have arrived at this violent Japanese party just in the nick of time. I’d like to invite each of you as my “plus one.” 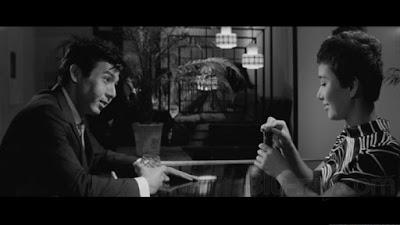 The Plot in Brief: Three brothers run afoul of a yakuza mob. Kuroda (Joe Shishido) is a hit man who turns on the mob after being asked to murder his lover. Eiji (Tatsuya Fuji) is the rash and violent brother who strikes first and asks questions later. Saburo (Jiro Okazaki) is the youngest and most innocent, an aspiring boxer who also plays drums in the brothers’ nightclub.

Can Kuroda break from the mob without repercussions? Working together, can the three brothers muscle the powerful mob out of the city? Will mob big shot Shirasaka (Hideaki Nitani) turn on his best friend Kuroda and be forced to murder him? Clearly, we are looking at the stuff of delicious film noir goodness.

I was taken with many aspects of this film. The film is quite a bit more violent than any American counterpart from 1967. Bonnie and Clyde received a lot of attention that same year for its groundbreaking use of violence; Massacre Gun is significantly and quantitatively more violent than Bonnie and Clyde. Also, director Hasebe’s shot compositions are beautifully framed and directed. I noticed that in the two scenes where a character is literally being asked to switch sides, Hasebe breaks the famed “180-Degree Rule,” deliberately disorienting the viewer; the cinematography and editing become a visual metaphor for the film’s narrative. It’s very subtle and very effective. (At these two points in the film, I fell off my couch while trying to pat myself on the back for teaching film to high school students for more than 30 years.) 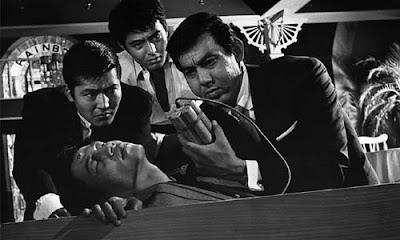 Falling down the rabbit hole of researching this film and its origins, I have discovered at least twenty films that I can now look forward to seeing and enjoying. I do not know if it has something to do with Japanese culture or just the hit-and-miss nature of translating a specific language’s idioms, but these films have the craziest, most tempting titles: The Naked Woman and the Gun; Passport to Darkness; Take Aim at the Police Van; Everything Goes Wrong; Go To Hell, Hoodlums; The Big Boss Who Needs No Gun; Million Dollar Smash and Grab; The Guys Who Put Money On Me; Detective Bureau 23: Go To Hell, Bastards! (all directed by Suzuki); and Black Tight Killers; The Singing Gunman; Alleycat Rock: Sex Hunter; Naked Seven; Female Convict Scorpion: Grudge Song; Secret Honeymoon: Rape Train; and Dangerous Cop (all directed by Hasebe).

At this point I cry out in anguish, just like one of the characters in these terrific crime films, as I suddenly realize that I absolutely must purchase all of these films yet I AM ON A FIXED INCOME.

Thrills: 80%
(The sheer thrill of seeing one of my favorite American genres, film noir, being reinterpreted by another culture)

Chills: 80%
(A level of explicit violence we are not used to seeing in films of this era [era]. When the brothers repeatedly smash a hoodlum’s hand with a barbell, all bets are off)