Equal parts supernatural horror, martial arts, and Blaxploitation, nothing can prepare you for how much fun Devil’s Express truly is.

Patrick has been singing the praises of this movie for a while now, and he’s even recommended it in his weekly streaming showcase. He knew that it would be straight up my street, and he was right! Devil’s Express is ridiculous in all the right ways, marrying a high concept with a DIY aesthetic to create something that feels refreshing in how earnest it is. Think of Miami Connection and how sweet that film actually is underneath the ridiculous levels of violence. Then add afros, a supernatural threat, and a funky chicka-bow-wow seventies soundtrack for an experience that is far from refined, but totally a blast.

Long ago in China, an evil force was unleashed that was so dangerous that good people willingly gave their lives to imprison it. Cut to New York in the seventies, where we meet an inner-city martial arts teacher named Luke and another guy from his neighborhood, Rodan (not Godzilla’s nemesis). Through a series of events that has something to do with an amulet, the evil force has been set free once again, and now it’s loose in the subway beneath the city streets that Luke calls home. How does one beat true evil? With teachings about discipline, and lots of kung fu, of course. 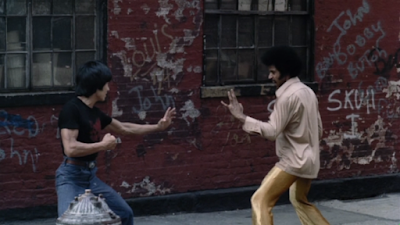 The character of Luke really feels like one of the many inspirations for Michael Jai White’s Black Dynamite: he’s a philosopher, a hit with the ladies, commands the respect of everyone on his block, and he has a progressive fashion sense. Even his hair is stands tall. The part is played by a guy named Warhawk Tanzania, and finding any information about Tanzania is a real challenge. Watching this movie makes it very clear that he’s obviously not an actor in any professional sense. In fact, his entire film career consists of only two movies, with the other one being 1975’s Force Four. From digging around on martial arts message boards, I’ve uncovered that his real name is either Warren Hawkins or Warren Hawks, that he was a brown belt when he made these movies, and that he just went back to a normal life in Brooklyn following the films. I’ve also found out that the martial arts style seen here is called Nisei Goju-Ryu, a discipline founded by Hanshi Frank Ruiz, who was Warhawk’s teacher. It was Hanshi Frank Ruiz who served as the action director on this film, providing the fight choreography for his real life students. I also discovered that the actor who plays Rodan in this movie (Wildredo Roldan) took on the mantle of teacher at the school following the death of Ruiz. Learning how tight this group of people were behind the scenes makes me like the movie even more. 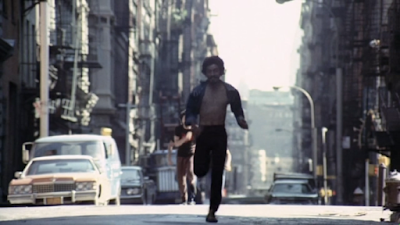 As you can tell, this is a very small movie that relies on the talent of just a few passionate people. As with almost all movies of this caliber, the aspirations of the filmmakers far exceed their grasp, but what this movie lacks in things like gloss and technique is more than made up for with enthusiasm, practicality, and a beautiful sense of naivete. Around half-way into the film, there’s a love song called “That’s Why You and I Believe” that accompanies what this movie thinks is a romantic interlude. The lyrics are so simple that they’re embarrassing. Consider this line: “When the tables are turned and you’re feeling sad/I’ll be the best refreshment you’ve ever had/I’ll make you glad.” the song is even delivered slightly off-key, but I can’t bring myself to put it down because it’s done with so much earnestness that it somehow works in spite of being so awful. I recognize that it’s a mess, but because the movie has no irony and completely believes in itself, so somehow I do too.

The movie is a mess in other ways, too. Most of the time, it feels like two completely different narratives. In one of them, there’s an evil from East Asia that mercilessly prowls the streets. In the other, there’s a gang war raging over drugs and turf in the inner city. At some point, these two storylines intersect and it all clicks together, but it’s not a smooth ride. Warhawk Tanzania disappears for about twenty minutes of the movie. There’s a buddy cop subplot that’s half-baked. The demon that’s killing people in the subway is never satisfactorily explained. It feels like a lot of this movie was being made up as the filmmakers went along, which I suspect is probably close to the truth. 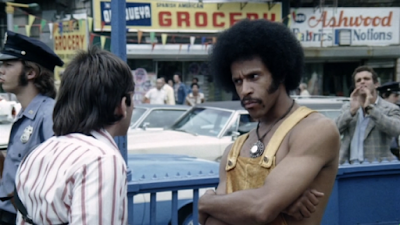 But when Devil’s Express delivers, it really works. The movie plays best when it focuses on these characters and their streets. Tanzania really feels like a local hero, and if he really was a brown belt at the local martial arts studio, it stands to reason that he really was a mentor to this community. The movie makes up for the sparse plot with frequent action scenes. The fight choreography is lacking (the fights sometimes feel too slow) and there are some wide misses with the punches and kicks, but then someone will stomp on a guy’s throat, sending blood spewing everywhere and reminding us why we’re watching this. While Tanzania is no great talent, he’s good enough for what this movie requires of him. Plus, he’s got a swagger and a delivery that sets him aside from literally everyone else in this film. By the time we get to the final battle and realize that he’s taking on a demonic force while wearing a gold velour jumpsuit, it’s hard not to like the guy and want to see more of him. He may not be Bruce Lee or Jackie Chan, but the guy had something. 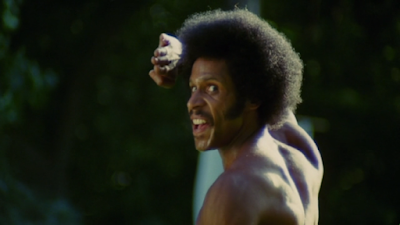 It’s easy to dismiss Devil’s Express as just another low-budget bit of nonsense, but I think that would be doing it a disservice. There are lots of bad movies out there, but it takes a special bad movie to be completely watchable and fun. I firmly believe that everyone involved in this movie was trying their absolute best to make something great, and that’s why I appreciate it so much. Really, it has a lot going for it. Though definitely not an actor, Warhawk Tanzania has his own brand of charisma, a memorable look, and some hilarious facial expressions. It’s a bummer that he only appeared in two movies and then disappeared. I also appreciate that this movie had such a small budget but wasn’t afraid to swing for the fences with a high-concept monster and ambitious filming locations. I’m so glad that Patrick was enthusiastic enough about this movie to put it on my radar, and I’m so glad that this movie exists.