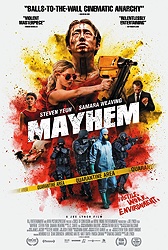 Mayhem (2017, dir. Joe Lynch) The latest Joe Lynch movie premiered exclusively on Shudder this week! I really liked it when it had a limited/VOD release late last year. Steven Yeun is very good as a lawyer trapped in an office building during a kind of "rage virus" outbreak, but Samara Weaving steals the show as an angry would-be client. The movie is fast, violent, funny, and has something to say about modern-day workplace frustration and powerlessness. It's very much worth your time. Joe Lynch continues to be the best. (Watch on Shudder) 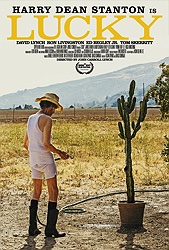 Lucky (2017, dir. John Carroll Lynch) Another Lynch! This time it's actor John Carroll Lynch, making his directorial debut in a quiet character study about Harry Dean Stanton (in one of his very last roles) facing old age and dying the way only he can. You never want to choose an actor's swan song because it means losing him or her, but as such things go, there couldn't be a more perfect one for Stanton. This is a beautiful, poetic film that's rich with character and beautiful photography. It also features a great supporting role for David Lynch as one of Lucky's friends. Third Lynch this week! (Watch on Hulu) 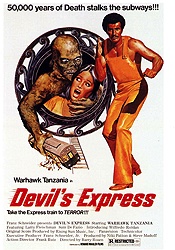 Devil's Express (1976, dir. Barry Rosen) I've been telling Heath Holland about this movie for a few weeks because I have a copy I need to send him. This film must be part of his 1976 series. Part kung fu movie, part horror film, part blaxploitation, it's about a gang war that breaks out around the same time that a demon begins stalking the New York subway tunnels to retrieve a medallion from the excellently-named Warhawk Tanzania. It's nuts and so entertaining. Pity that Tanzania made only two movies: this one and Force Four. Of the two, I prefer Devil's Express. See for yourself. (Watch on Amazon Prime Video) 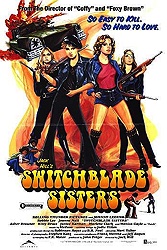 Switchblade Sisters (1974, dir. Jack Hill) I know I've recommended this one before, but only because it's one of my favorite movies of all time (and a constant toss-up between this and Coffy for the titles of Favorite Jack Hill film). It's tough and cool and Joanne Nail is otherworldly. Girl gangs have never been so cool. You don't even need a subscription to watch this one! (Watch free on Tubi TV) 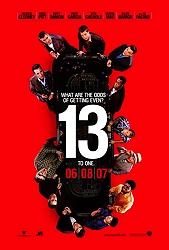 Ocean's Thirteen (2007, dir. Steven Soderbergh) Partially inspired by Adam and Rob's recent Al Pacino obsession and partially inspired by my own rewatch of Ocean's Eleven, I'm going to go out on a limb and recommend the third sequel in the Ocean's series (all three of which just popped up on Netflix). The first film is by far the best, the second is the most experimental, but the third one still manages to be mindlessly entertaining thanks to a great cast, colorful design, and a bouncy, jazzy score. It's a mostly pale copy of the original (remake), but I still find it to be super watchable and just satisfying enough. (Watch on Netflix)
Posted by Patrick Bromley at 5:00 AM