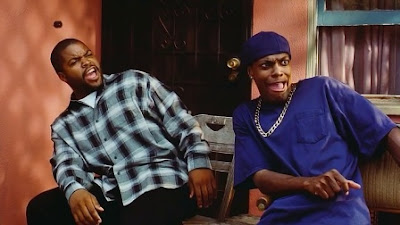 Send this to your printer and smoke it.

• Ice Cube (Craig Jones) – Craig is a slacker more than a stoner (he becomes both more in the sequels) who is kind of funny and likable, but primarily a bump on a log -- e.g. he got fired on his day off! He loves Crunchies cereal but won’t put water on that damn shit, he wants to hook up with wholesome Debbie (Nia Long) but is dating Joi (Paula Jai Parker), who ain’t nuthin’ but a hoochie mama, he complains a lot, beats up a kid named Lil’ Chris (alongside Smokey) for knocking over the neighborhood trash cans and knocks Deebo out after Deebo beats up Debbie’s sister (Bye) Felicia. In the end, Craig breaks up with Joi and wins over Debbie but still doesn’t have a job. He needs to check out that new health club on 108th and see if he can get one there. Spoiler: Based on evidence of the sequel, he doesn’t. Ice Cube is good here at changing up his usual on-screen tough guy demeanor and just playing a regular, albeit lazy, dude. He also performs the title song for the movie (which plays over the end credits) and it’s fantastic. 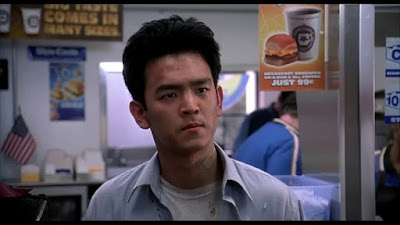 • John Cho (Harold Lee) – A straight arrow, paranoid pushover banker stuck doing Ethan Embry’s financial models on a Friday night. Harold is too nervous to talk to Maria, loves Sixteen Candles, fights a raccoon that spits up blood on him before he can toss it out the car window, causes Kumar to run his car off the road, gets a $220 ticket for jaywalking and then gets thrown in jail for hitting a police officer, steals Cole’s extreme truck, orders 30 sliders/5 fries/4 large Cherry Cokes at White Castle (he would die), busts Ethan Embry and his lackey for pushing their work on him, finally talks to and makes out with Maria and then (creepily) follows her to Amsterdam. John Cho rules, especially in this movie. 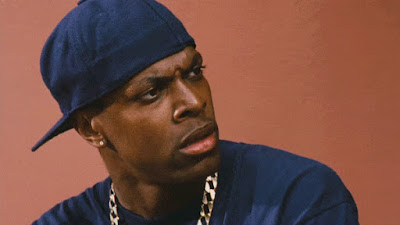 • Chris Tucker (Smokey) – Craig’s friend and bad influence. Smokey sells weed for Big Worm (Faizon Love) but mostly just smokes his stash. Smokey (a vintage Chris Tucker creation that rightfully launched his film career) is a weed addict, drives a broke Ford Pinto, wants to get it on with short-shorts wearing Mrs. Parker, does a mean Tony Montana impression, takes a shit in some bushes and originates the iconic phrase “You got knocked the FUCK OUT!” In the end, Smokey survives Big Worm’s attempted hit and pays him his money, promises to go to rehab but just tokes up instead right away. Ironically, based on the evidence of the sequels, Smokey did go to rehab. Tucker didn’t want to reprise his role in Next Friday or Friday After Next (the actor became a born-again Christian), so we leave his character after the original.

• Kal Penn (Kumar Patel) – A brainy, slacker pothead who repeatedly tanks his med school interviews to get back at his dad, cuts his pubes and ass hair with Harold’s nose hair trimmer, wants to hook up two British ladies at Princeton until they play “Battleshits” in the bathroom stall (it’s the most disgusting thing in the history of things), pees in the bushes with a disheveled Jamie Kennedy, steals pharmacy ID cards from his dad, performs an emergency surgery with Ryan Reynolds, speaks Hindi, crawls and falls through the police station air duct to break Harold out of prison, hang-glides with Harold to evade the police and orders 30 sliders/5 fries and 4 large Diet Cokes at White Castle (again, he would die). Kumar eventually comes to terms with being awesome and goes to the next med school interview gifted to him by his doctor father.

• Tommy ‘Tiny’ Lister (Deebo) – The neighborhood bully, stole Red’s bike, breaks into Stanley’s house and steals $200, hooks up with Felicia, steals Red’s chain, beats up Felicia, gets his ass handed to him by Craig.

• John Witherspoon (Mr. Jones) – Craig’s gross dog catcher father, always eating, sleeps with a Slinky Dog stuffed animal, always shitting or needing to shit, gets his ass bitten by a dog at work, recovers at home in bed watching Man’s Best Friend, gives Craig a “nice” speech about how being a man means not using a gun to solve your problems but instead beating your adversary up with your fists.

• Regina King (Dana Jones) – Craig’s stuck-up sister who sleeps holding up her head to not mess up her hair, won’t hook Craig up with Debbie or loan Craig $200 to pay Big Worm even though his life is on the line.

• Faizon Love (Big Worm) – An ice cream truck driver drug dealer who wears hair curlers and tries to kill Smokey and Craig for not having his bud or his money.

• Neil Patrick Harris (Himself) – A hitchhiker Harold and Kumar pick up while he’s tripping balls on ecstasy. NPH steals H&K’s car to pick up strippers/cocaine and returns it to them the next morning. He pays for their White Castle to apologize. This performance is iconic. 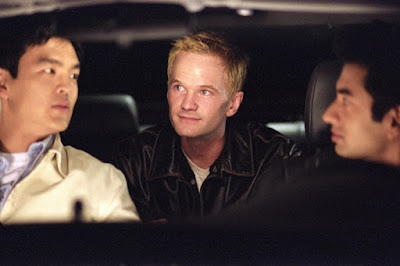 • David Krumholtz/Eddie Kaye Thomas (Goldstein & Rosenberg) – Harold and Kumar’s Jewish stoner neighbors who we meet as they are watching The Gift on HBO to see Katie Holmes’ boobs. They smoke weed out of a Shofar and go to Hot Dog Heaven after they get high (it’s their perfect stoned food). On the way they visit the “Asian party” at Princeton, where Goldstein hooks up with Cindy Kim, aka the woman who wants Harold.

• Christopher Meloni (Freakshow) – A disfigured man who loves Jesus and has lots of boils. He helps Harold and Kumar when they’re stranded after their car runs off the road, says H&K can have sex with his wife (cameo by Malin Akerman) and has a singing voice like a baby canary. Once he sees Harold and Kumar are about to have sex with his wife, he asks if they want to have a foursome. They do not.

• Cole (Steven Braun) – Leader of the Extremes, a band of skater punk hooligans. Cole steals Harold’s parking space, drinks Mountain Dew, taunts Harold and Kumar, extreme kayaks in a convenience store (9.5 out of 10 on the Extrememeter) and is a poser who recorded an Extreme Mix consisting of Bonnie Tyler, Amy Grant and Wilson Phillips music. In the end, Cole and his gang go to jail for being caught in possession of a giant bag of weed.

• Craig and Smokey have a smoking montage on Craig’s porch to the great Rick James song “Mary Jane.”

• Smokey gets high on angel dust given to him by Hector, which he thinks is weed. The angel dust makes Smokey run in the street in his underwear and he wakes up twitching Deebo’s pigeon coop.

• Harold and Kumar smoke weed and watch television at home, including a funny fake “Marijuana Kills” PSA, and decide they need the perfect food: White Castle sliders. The journey begins.

• Harold and Kumar smoke a joint on the stairs when they visit Cindy Kim at Princeton.

• Bradley gets arrested and goes to jail for having a giant bag of weed.

• Kumar has a weed fantasy about Bradley’s bag where he and the bag of weed are a couple, go on dates, have sex, get married, struggle financially, have a fight and make-up. 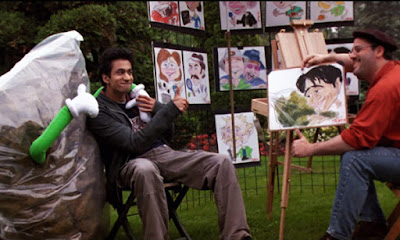 • Harold and Kumar get high and ride an escaped cheetah but Harold’s laptop breaks when he’s knocked off the animal by a large branch.

• Harold has an animated hallucination where he’s running to Maria alongside cartoon White Castle sliders.

Next Friday – The first sequel to Friday is a little more sluggish than its predecessor and oddly the elements that carry over from the original (including Ice Cube, Deebo, John Witherspoon) are what drag the sequel down. The new characters, like Pinky (Clifton Powell), Roach (Justin Pierce) and Joker (Jacob Vargas), are funny and keep the movie lively whenever they’re on screen. Mike Epps plays Day-Day (Craig’s cousin and essentially the replacement for Chris Tucker’s Smokey) and he’s solid, too, bringing a different, but equally likable, doofus energy to the film. 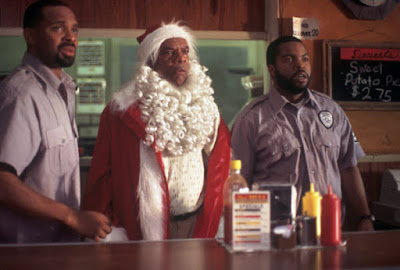 Friday After Next –This is a zany, fun and bizarre comedy that has a spirited (pun intended since it takes place at Christmas) pulse throughout. Carryovers from the sequel like Day-Day and Pinky get even weirder, Kat Williams is hilarious as a store owner pimp and the setting of a strip mall instead of the neighborhood set from the first two films keeps the movie feeling somewhat fresh. I might like Friday After Next as much as the original. It’s a movie that refreshingly does whatever it wants.

Harold & Kumar Escape from Guantanamo Bay – This movie is a goddamn nightmare. Guantanamo Bay is an ugly, mean and joyless movie that takes an ambitious approach (basically exposing racism in America via Harold & Kumar as conduits) but completely botches it. The tone is uncomfortable and never funny, playing that juvenile game of a) offending everyone for fun and b) being offensive and wanting to get away with it because it knows it’s being offensive (as if either thing gives it a pass). Fuck this movie. It’s a The Lost World from Jurassic Park size drop off.

A Very Harold & Kumar 3D Christmas – A welcome rebound from the awful Guantanamo Bay, 3D Christmas brings back some of the silliness of the original, deepens the character relationships and has fun with its Christmas and 3D premises (the 3D gags are somehow funnier now when I’m watching it on a 2D Blu-Ray). The film still carries over some of the last movie’s mean-spiritedness, including a Harvey Weinstein level assault by Neil Patrick Harris that doesn’t play and a running gag about a baby ingesting multiple narcotics. But hey, there’s a Claymation sequence and the introduction of Waffle Bot (a robot that makes waffles and loves its owner like a household pet), so that’s a plus.

What are your thoughts? What scorecards would you like to read in the future? Leave a comment below. Happy 4/20 to those who partake.
Posted by Patrick Bromley at 5:00 AM