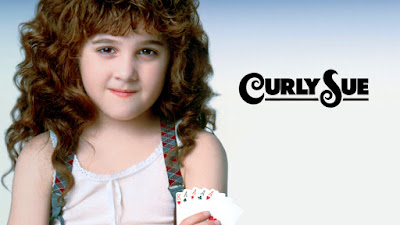 You’re probably wondering what the hell I’m talking about. Let me explain. I wasn’t expecting it, but my goodness do I have a crush on Kelly Lynch in Curly Sue. She plays a jaded lawyer named Grey Ellison and over the course of the film she learns that her career isn’t everything and that being a mom to a young drifter named Curly Sue (played by a charming Alisan Porter, who would later go on to win season ten of The Voice) is what makes her heart whole. Grey Ellison is such a lady. The funny thing is I’ve never had this reaction (or any reaction) to Kelly Lynch in another movie but her in Curly Sue…I mean…Maternal Lynch, yo! Movie crush aside, I really think Kelly Lynch is the MVP of Curly Sue. She has the most interesting (albeit predictable) arc of any character, going from cold and snobby to open and warm. To my delight and maybe the core audience’s frustration back in 1991, Curly Sue works best when the film is an oddly mature family dramedy. I thought the movie was going to be mostly precocious kid hijinks, but aside from a few dress-up scenes and food jokes, it’s more about the lives around Curly Sue (and how she impacts them) than about the title character herself. 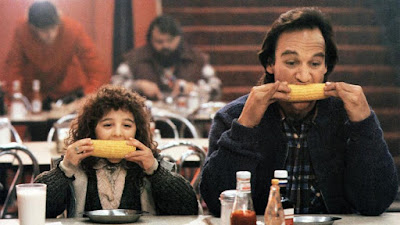 Curly Sue wasn’t an important movie to me as a kid. It was released in theaters in late October 1991 (one week before The People Under the Stairs!!!!) and I don’t think I saw it until cable sometime in 1992. It went in one ear and out the other, mainly because it was a “girl movie” (give me a break, I was 10 years old) but nowadays I’m all about revisiting any ‘90s kids’ movie for this series, especially if it’s the last film ever directed by auteur John Hughes. Hughes also wrote and produced Curly Sue, and it feels like a shaky mix of his earlier sentimental films like Planes, Trains and Automobiles and his newfound success as the writer of the more kid and slapstick-friendly Home Alone. There are multiple moments that play like he’s hedging his bets with cartoonish Maître D’s being slapped or cartoon sound effects for people getting hit. This is a very earnest movie, and besides Kelly Lynch, a lot of credit goes to Jim Belushi as well (he plays Bill Dancer; this movie has weird character names). The actor is much more reserved than usual (e.g. he’s in Chicago the whole movie and never mentions the Cubs once) and gives a sweet performance as a drifter who had a one-night stand with Curly Sue’s mom and then took the young girl in as his own when her mother died. 1991 was a good year for Belushi between his work here and in another movie with a John Hughes connection, Chris Columbus’ Only the Lonely. Dumb mullet aside, Belushi is very appealing in these films as he checks his own ego as a performer and plays a character. 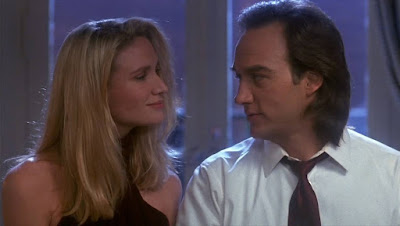 On the fringes, Curly Sue has a few other pleasures. It features some fun bit parts and cameos. My favorites are a one scene pit stop with Beverly Hills Cop’s John Ashton as a sleazy politician and a very brief walk-on by Steve Carell (billed as Steven Carell) in his film debut playing a waiter. There’s also a fun sleazebag performance by John Getz (because of course the sleazebag is played by John Getz) as Kelly Lynch’s boyfriend and a couple of scenes from Ralph Foody as a scheming homeless man. You might remember Foody when you see him as the Tommy Gun gangster in the movie within a movie in Home Alone. It’s interesting to see him in color! He’s creepier in color. I also dig the cinematography by Jeffrey L. Kimball. I was going to say, in a more general way, that I love movies shot in this 1990-1991 era (era), but when I looked at Kimball’s filmography, I’m noticing I’m just a really big fan of this guy’s work! He shot not just Curly Sue, but also the beautiful looking Top Gun, Beverly Hills Cop II, Revenge, Jacob’s Ladder, and True Romance, among others. If for no other reason, I’m happy to have revisited Curly Sue to realize finally who is responsible for all this great work. And Kelly Lynch! 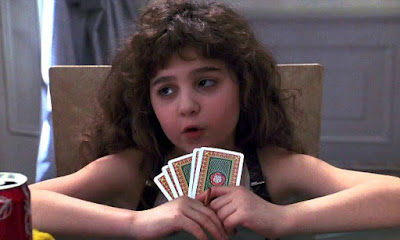 So far it sounds like I love Curly Sue, right? And this is the place where I say “well…it isn’t a perfect movie” but you know what? I’m not gonna because I like this movie so much that even it’s more problematic elements are charming to me. I’ll close with an example. There’s a sequence in the second act where Belushi and Porter decide to take Lynch out “drifter style” where they crash a wedding for grub and then catch a movie at the beloved Chicago movie palace, the Music Box Theatre. This sequence is equal parts great (because you get to see some historical 1991 interiors and exteriors of the theatre) and a nightmare because the scene in the auditorium with a crowd watching the movie is nonsense. Let me explain. Curly Sue sneaks into the theater to let Belushi and Lynch in through the side door. On her way to the door, she puts on 3D glasses (the audience is apparently watching 3D Looney Tunes shorts) and stands in the aisle and laughs immediately upon seeing something. Everyone in this theatre is laughing way too much for Looney Tunes shorts (which are funny, but there are like 500 people pissing their pants here) and when something 3D happens, they exaggerate their reactions to a lunatic degree. It’s a scene that gives me a lot of anxiety until I see Kelly Lynch in the finest evening dress worn by a woman in 1991 (Ale agrees with me). 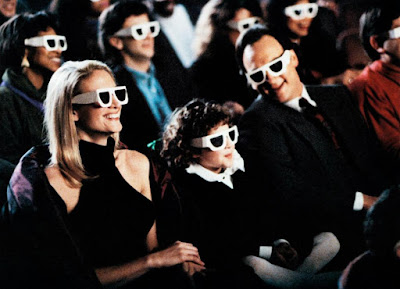 I’m really shocked I like Curly Sue this much. So…yeah…now I feel a little exposed.