Horror Shorts: MY MONSTER and 42 COUNTS 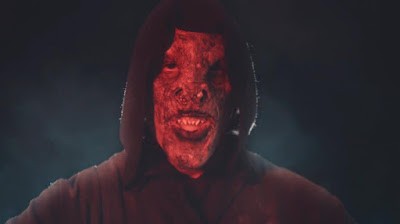 Two of my favorite Women in Horror have new short films making the festival rounds, and you should seek them out.

I've written a number of times on this site about Izzy Lee and Jill Gevargizian, two filmmakers whose work is consistently exciting and who I want to be directing features as soon as possible. Izzy was even good enough to come on the podcast once to talk about The Brood and it was one of my favorite episodes because of how much we got into the challenges of independent filmmaking, particularly when you're a woman. Izzy is outspoken and doesn't take any shit, and that quality definitely carries over into her films, too; her past shorts "Rites of Vengeance," "For a Good Time Call..." and "Innsmouth" all deal with sexual politics in one form or another, each one critical of of whatever status quo on which it is commenting. "Vengeance," in particular, comes from a real place of anger, and it's exciting to see the way that she works so many larger themes into her work. I'm not just saying this because she talked about The Brood being one of her favorite movies on our show, but Lee's films remind me of early Cronenberg in that they're kind of messy and unhinged, as much about the ideas as they are about the horror elements.

Her latest, "My Monster," stars indie horror icon Brea Grant and director Adam Egypt Mortimer (Some Kind of Hate) as a couple who are stuck in a routine, which is to say that he takes her for granted and can behave quite thoughtlessly. She has begun hearing noises outside the house that he can't hear, until one day she discovers the source: there's a monster outside and it wants something from her. 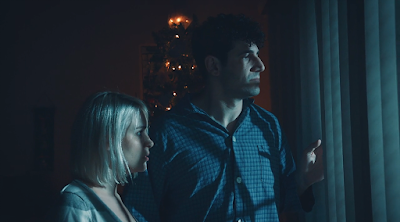 "My Monster" is the most overtly comic short Lee has made to date, but the laughs aren't slapstick or jokey. This is a comedy of identification and exasperation: we laugh because we've been there and because what Lee sets up is just silly enough to tip the short over into humor. It's structured like a comedy, too, with an obvious punchline (then again, horror and comedy aren't too dissimilar in terms of their structure and timing) that really lays out what Lee wants to get across about what we put into relationships versus what we get out of them and how patterns of behavior repeat themselves. That's a lot to pack into a short film that runs just about seven minutes -- especially when she's also introducing bloodsucking monsters from alternate dimensions into the mix. It's fun to see Lee's usual bite applied to a more comic sensibility, and the casting of Brea Grant is inspired not just because these are two women who should be working together, but because Brea Grant is in the same category as Carla Gugino: any movie with Brea Grant is automatically better than that same movie without Brea Grant. 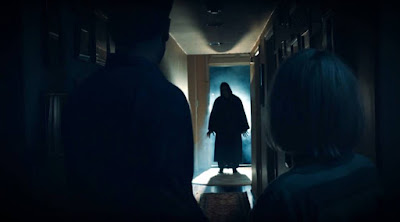 "My Monster" is currently playing festivals around the country and is scheduled for upcoming screenings in Kansas, Boston, and Portland. I'm really hoping it gets to play at Chicago's upcoming Cinepocalypse festival, too. For screening dates, visit Izzy's official site.

Next up is "42 Counts," the latest from the incredibly talented Jill Gevargizian out of Kansas City, Missouri. I first became aware of her when her short "The Stylist" began racking up awards and played at an independent horror festival here in Chicago, and I was blown away when I finally got to see it. Using her own life as inspiration (Gevargizian has worked as a hair stylist in Kansas City), the short is gory and sad and beautifully made, with a great performance form Najarra Townsend. Rather than just make a punchy little short with a scare or two, Gevargizian and Townsend create a real character study. That's a rare thing in shorts, particularly in the world of horror. I immediately went back and watched her other shorts and have been closely following her career ever since, talking her up whenever possible in the hopes that she'll get to direct a feature soon. It looks like my wish has been granted, too, as I believe she's about to embark on her first feature starring -- who else? -- Brea Grant. I can't wait.

Based on a true story that took place in Kansas City in 2014, "42 Counts" reunites Gevargizian with Townsend, who, along with Andrea Dover, play a pair of girls hanging out in a loft rented from their boss. Watching a movie and talking about relationships and sex, Townsend discovers something unusual about one of the smoke detectors: it appears to be a hidden camera. The girls keep investigating until they discover some shocking secrets about the place they've been living and the man they thought they knew.

What has consistently impressed me most about Gevargizian's films is just how confident and polished they are. Whereas Izzy Lee is raw, Gevargizian is slick and measured -- the Carpenter to Lee's Cronenberg. Her films are formally and technically precise, and that's true of "42 Counts." The photography is gorgeous, soaked in primarily colors out of an Argento film until it gradually becomes dirtier and grimier, the artifice of the girls' safety giving way to reveal something much darker. The camera moves slowly and deliberately in tracking shots, the editing increasing our dread. Even the score feels big. This short feels very produced and expensive, defying what I have no doubt is a fairly low budget and demonstrating that Gevargizian knows how to make the dollars count.

For almost the entirety of its running time, I was totally on board with "42 Counts." The reveal of what's happening, the girls' increasing sense of dread, the way things get much scarier with the arrival of a third character -- all of it feels like the cinematic realization of fears that women experience every single day. The short doesn't stick the landing quite as well as I wanted based on the build up; it's impossible to talk about "acts" when it comes to short films, but if I could I would suggest this one substitutes a text screen in place of a third act -- what I might call the Unbreakable ending. I understand the necessity of such an ending given the limitations of the form, and I suppose its a testament to my own involvement in what was happening that I was ready for more, but it does feel abrupt.

I love that these two filmmakers have been so prolific the last few years, though it does make me wonder why a feature hasn't already happened (like I said, it does sound like Gevargizian is prepping one now). My suspicion is that while it's (relatively) easy to go out and make a short on your own, there are still a lot of gatekeepers to getting a feature made, whether it's financing or distribution, and a lot of those gatekeepers are still men. Supporting good work like this -- and especially getting the word out about good work like this -- is essential if we want to at least level things out some more. In the meantime, we can continue to enjoy their bodies of work while pushing for something even bigger for both. Izzy Lee and Jill Gevargizian are essential voices in the horror genre right now. The world needs more of them.

"42 Counts" will have its international premiere at the Toronto True Crime Film Festival on June 9. For information on future screenings, visit the official Sixx Tape site.
Posted by Patrick Bromley at 12:00 PM