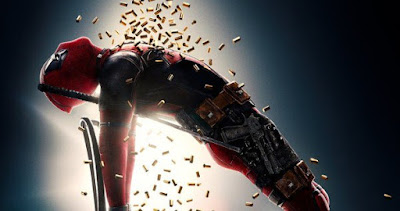 I liked 2016's Deadpool just enough that I'm happy to see it getting a sequel. I thought it did a good job establishing the character of a smart-ass, hyper-violent and unkillable mercenary, creating the tone of the world in which he lives, and distinguished itself from every other contemporary superhero movie by constantly breaking the fourth wall and leaning hard into its R rating. It did all of these things while at the same time barely being a movie, but rather about three action set pieces bookended with lots and lots of flashbacks. When the movie was a surprisingly massive hit, I was happy because I hoped it would embolden studios to takes some risks with their superhero formula (for the most part, they haven't) and because I thought Ryan Reynolds deserved the win after trying for many years to get a Deadpool movie made.

It should come as no surprise that just two years later, we're getting a sequel in the form of Deadpool 2. That it has moved to a big summer release date is a measure of the first film's success and of the studio's confidence in the property -- which, as the film is setting records in its opening weekend, is well-founded. Having established the character and the tone the first time around, screenwriters Rhett Reese and Paul Wernick (along with Ryan Reynolds, who gets his first screenplay credit here) and new director David Leitch have decided to see what happens if they take that character and put him into an actual movie. The results are mixed, but just like with the first film, Deadpool 2 works in the ways that it needs to work. 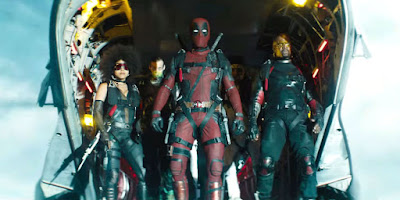 This time around, our heartbroken hero wants to prove himself and do some actual good, auditioning for the X-Men (still only represented by a cartoonish Colossus and returning Brianna Hildebrand as Negasonic Teenage Warhead) and coming into the path of Russell (Julian Dennison of Hunt for the Wilderpeople), a troubled kid living at a sort of orphanage for mutants where he's being abused. When Deadpool handles things the wrong way and blows his X-Men audition, he decides instead to begin his own super team -- X-Force -- which includes characters like Bedlam (Terry Crews) and, most importantly, Domino (Zazie Beetz), whose mutant power is luck and who steals the entire movie and possibly this summer.

Oh, right, and the kid is being hunted by Cable (Josh Brolin), a mutant traveling back from the future to prevent the deaths of his own family and the scorching of the entire Earth. Apparently, Deadpool and Cable were a well-loved team in the comics years back, to the point that the character's appearance in the sequel was even teased in the original Deadpool. I get that their dynamic could be appealing because the two heroes are so fundamentally different and that relationship is hinted at from time to time in Deadpool 2, but for the most part Cable is on hand just to be an obstacle to run away from or fight against. Brolin is good in the part and I'd be interested in him sticking around in future sequels, but I'm not sure anyone looking for their dream Deadpool/Cable team up is going to walk way from this movie fully satisfied. 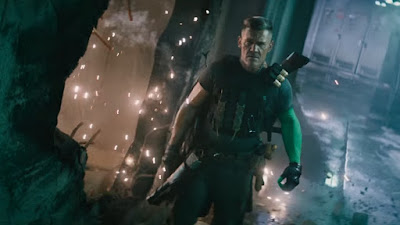 Yes, Deadpool 2 is overstuffed. There are too many characters, too many subplots, too many tangents, often too much business happening on screen. I didn't really bother me, because I realize I'm not coming to these Deadpool movies to be told a really good story. I'm there for the irreverence and the attitude, and Deadpool 2 has plenty of that. Fewer than half the jokes land, but enough is thrown at the wall that at even a less than 50% success rate is enough to keep things entertaining. There are some fun surprise cameos and surprise characters, there are funny jokes about the MCU and DCU and Batman v. Superman and Infinity War and a really funny Logan joke that opens the movie, letting you know exactly what you're in for. There's even a great line about John Hillcoat's The Proposition, and what other big-budget superhero movie out there is doing anything like that? The language is filthy, the violence bloody and ridiculous. I can totally understand the snottiness of it all rubbing people the wrong way, but I find that I'm happy to give myself over to the anarchy of it all because at least it feels alive and more than willing to celebrate being what it is.

Plus, there is an emotional core to the film that keeps it from being a bunch of winking at the camera and f-bombs. The romance between Wade and his girlfriend Vaness (Morena Baccarin) gave the original movie a throughline that made us care when it really didn't need to, and it was better for it. Deadpool 2 does maybe my least favorite thing in sequels, and, to be honest, it took me at least half the film to be won back. Eventually, though, it settles into being a movie about creating your own family, a theme to which I'm particularly sensitive, and again gets us to care just enough to go along with too-muchness of it all, to the point that there are moments in the back half that I found genuinely moving. Again, it didn't have to be at all emotional. I suspect the movie would be just as big a hit if it were just obnoxious and violent and profane. It's still all those things, but at least it bothers to make us care a little, too. 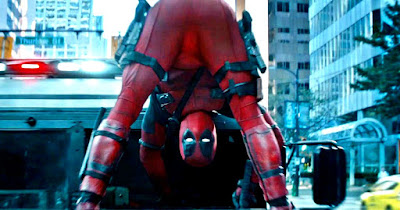 Like I said, the movie is a mess. Some of the character motivations are inexcusable in 2018. The CG is fairly terrible, which I could overlook on the last movie because it was done relatively cheaply. The sequel, while being twice the scale, also has twice the budget. That makes it a little harder to overlook some shoddy effects work, including two fully CG-rendered characters that never come close to feeling like actual humans inside the frame. TJ Miller is still in the movie and is never funny once, but his presence stands out as even more of an eyesore post #MeToo in a film that's sex positive and features what I think are the first queer superheroes in a Marvel or DC movie. Not everything that's meant to be shocking or surprising is a shock or a surprise given the movie we paid to see. But goddamn if I didn't enjoy myself in a summer superhero blockbuster that doesn't feel like anything else that is playing or will play for the next few franchise-heavy months. I think what I like about these Deadpool movies is that they actually do believe in ideas like heroism and trying to do something good; they just go about it their own sometimes demented way. A lesser version of the material just shits on everything, including what it means to be a superhero. Deadpool 2 doesn't make fun of being a superhero. It just makes fun of superhero movies. Hollywood being what it is today, I'm ok with that.
Posted by Patrick Bromley at 5:00 AM