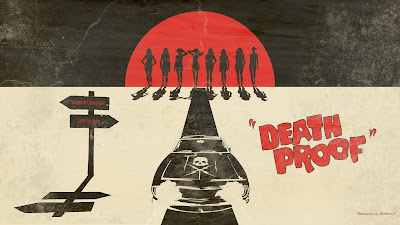 One of my very favorite car movies is a movie we need right now.

For some reason, Death Proof takes a lot of shit. It is consistently referred to as writer/director Quentin Tarantino's worst movie. The director himself even did the movie dirty by ranking it at the bottom of his filmography. I get that it feels more 'slight' than his other work; after all, it was made to fill out the back half of Grindhouse and designed to function like a 1970s exploitation movie, complete with all the limitations and clunkiness that entails. But I would argue it's QT's more personal film, too, and one of the very best examples of its genre -- as car movies go, it's quite near the top. It's a shame that everyone is so quick to dismiss the film as a lark at best, a stunt at worst. Death Proof is a truly great movie.

It's also a movie that comments on a lot of the toxic shit that's going on right now, in large part because it's the same toxic shit that's been going for years: what was true in 2007 is still true today. But we've seen this ugliness appear in new ways and are calling it out more than before thanks to the #MeToo movement. At the same time, the "Incel" (involuntary celibate) fucks on Reddit -- the ones who think the government should be supplying them with a woman to act as their sexual slave, because this is a thing some men have been emboldened to think and say out loud in 2018 -- have given themselves a label and a philosophy that goes beyond even the usual hatred/fear of women. There is a certain kind of misogyny that has been labeled and codified now, as has the push back against it. Both sides have grown stronger as a result. I know which side is going to win in the end. So does Death Proof. 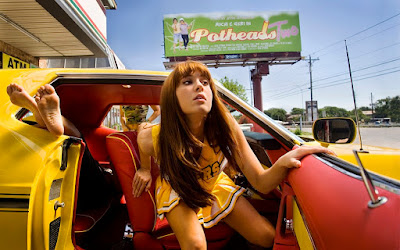 Stuntman Mike, the murderous antagonist of Death Proof played in a next-level great performance by Kurt Russell, is the Reddit poster boy. The only difference between him and one of these 4Chan dicks is that instead of sitting behind a keyboard, he's sitting behind the wheel of his 1970 Chevy Nova that's been reinforced so it's "100% death proof" -- for him, at least. It's here that he takes out his aggression against women for reasons never made fully explicit, as though a reason would explain such behavior. He is never said to be impotent, but is only able to perform in the driver's seat. Like these incel fucks, Mike believes he is owed something, insisting on collecting on a lapdance that Jungle Julia (Sydney Poitier) promised listeners to her radio show would be delivered by visiting friend Arlene/Butterfly (Vanessa Ferlito). In the theatrical cut of Death Proof, he is "denied" even that; Tarantino inserts a "reel missing" gag that jumps ahead to after the dance. The extended European cut, in which Tarantino includes the entirety of the dance (set to The Coasters' "Down in Mexico"), sees Stuntman Mike still unable to close the deal. When he can't have Butterfly or any of her friends -- when he can hardly even relate to any of them -- he chooses to smash into them with his car, killing them all. The metaphor would be far less scary if it wasn't exactly what happened recently in Toronto, or a few years ago in Isla Vista.

And then there is Tarantino himself, who we now know was somewhat complicit in the years of sexual assault committed by Harvey Weinstein (in his own words, he "knew enough to know he should have done more"). He appears in Death Proof as the owner of the bar in which we first meet Stuntman Mike eating his nacho platter. He's also, coincidentally, the one guy familiar with Stuntman Mike. He tells the character played by Rose McGowan -- herself an outspoken real-life victim of Harvey Weinstein -- Stuntman Mike's name. She askes "Who's Stuntman Mike?" He responds "He's a stuntman." He knows who Stuntman Mike is, yet serves him anyway. 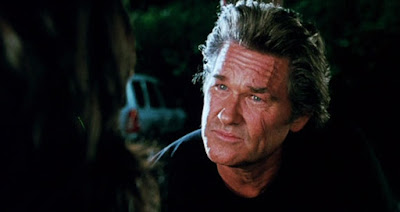 Having killed off a group of women who rejected him in Texas, Stuntman Mike turns up next in Tennessee. It's here that we are introduced to our second group of women, all of whom are working on a film set: an actress (Mary Elizabeth Winstead), a makeup artist (Rosario Dawson), and two stuntwomen (Tracie Thoms and Zoë Bell). Mike watches them but won't engage, only confident enough to approach when he's anonymously attacking them from the safety of his weapon of choice. It's telling that he chooses to attack while the women are together and having their own fun, playing a game of Ship's Mast on the hood of a "borrowed" white 1970 Dodge Challenger. ("The Vanishing Point car!") Look at any thread of women talking to one another on Twitter; it's only a matter of time before a man comes along uninvited and fucks it all up.

The difference this time is that this group of women aren't having any of Stuntman Mike's shit. His time, as they say, is up. He runs them off the road but fails to kill them, then gets out of the car and laughs, mistakenly thinking what he was doing was fun or funny. Instead of running away, Tracie Thoms' Kim takes out her gun and shoots him in the arm. He screams and speeds away, terrified to have the tables turned. The whole scenario plays out just like something I observed on Twitter last week, in which some fucking asshole inserted himself into the Twitter feed of a friend, thinking he was being cute or funny. When he was called out and put into his place, he immediately crumbled and fled back to his regular racist, misogynist timeline. Like Stuntman Mike and too many men before and after him, he was not used to being challenged for his shitty behavior. When he was, he retreated like the coward he is. Like the coward they all are. 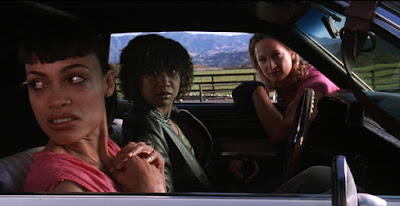 Therein lies the masterstroke of Death Proof and its indictment of toxic masculinity: Stuntman Mike is a pussy. Kurt Russell is so, so good at creating a character who is all swagger and cool bravado as long as he's calling the shots, but collapses into a screaming, crying baby the second the women fight back. During the second half of what is, for me, the best car chase ever put to film, Stuntman cries and screams "I'm sorry!" all while fleeing the women giving pursuit. I love the way that Kurt Russell, in what is one of my very favorite of his performances, commits to making Stuntman Mike totally weak -- the cowardly side of the killer we never get to see in slasher movies. It's where we are finally seeing so many of the men who have spent years victimizing women as Stuntman Mike has: on the run and completely, totally fucked.

Tarantino, who knows how to deliver a satisfying ending (see also: Inglourious Basterds, Kill Bill, and Django Unchained), gives Death Proof the most satisfying ending possible: the women run Stuntman Mike off the road, and while he's trapped and emitting a ridiculous, high-pitched scream, drag his body from the car and beat the shit out of him. Standing him up in the middle of the highway, they each take turns punching and kicking him, Tarantino's camera lingering on every blow to the extent that he occasionally freeze frames on the damage being inflicted. Those women deserve their revenge...and Stuntman Mike deserves to die. 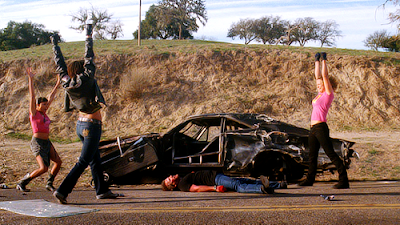 Watching Death Proof in the throes of the #MeToo movement, the ending is especially resonant. We're seeing women who have been preyed upon by a creep and a criminal who has preyed upon a lot of women literally put their boot through his fucking face. They're Rose McGowan. They're Uma Thurman. They're Asia Argento and Mira Sorvino and Amber Tamblyn and every woman, celebrity or not, who has had enough and isn't going to take any more of this shit. If Stuntman Mike is every one of these raging, woman-hating incel assholes, Death Proof comes down decisively on their eventual fate. They're monsters, for sure, but they're also cowards destined to be felled at the boots of the women who are coming for them. If that isn't the message of the time, I don't know what is.

Oh, and the car chase really is super cool.