Need ideas for what to watch for Week 1 of #Junesploitation! We've got you covered. 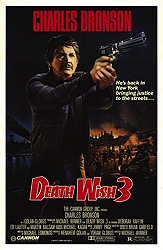 June 1: Revenge! - Death Wish 3 (1985, dir. Michael Winner) This is a movie we have been celebrating for years on this site. Maybe you haven't taken the time to watch it yet, or maybe you're not convinced is as nutty as we've advertised. Revenge day is your chance to right this wrong! Plus, it's free to watch so there's no risk. I can't imagine anyone being disappointed by it. It's definitely the best of the Death Wish movies and one of my favorites in the Cannon catalog. RIP The Giggler (Watch free with ads on TubiTV) 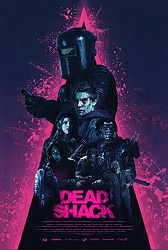 June 2: Zombies! - Dead Shack (2017, dir. Peter Ricq) This is a movie I saw during the first-ever Cinepocalypse in Chicago last fall, and I found it charming in an unassuming, Canadian kind of way. Zombies are pretty overplayed at this point, and while this one doesn't really do anything to reinvent the genre, it does at least have a slightly different energy and tone than a lot of other zombie movies and would make for a fun watch today. You'll hardly struggle to find a zombie movie across the various streaming platforms, though, so don't feel like you have to settle on this one. I don't know your life! (Watch on Shudder) 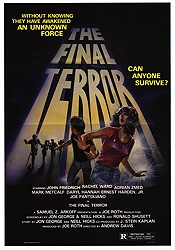 June 3: Scream Factory! - The Final Terror (1983, dir. Andrew Davis) What is, for the most part, a generic early '80s slasher distinguishes itself by virtue of Andrew Davis' direction and an amazing cast that includes Darryl Hannah, Rachel Ward, Joe Pantoliano, Mark Metcalf, and Adrian Zmed. I can't quite justify my affection for it except to say that I like backwoods slashers and I think this has some really good atmosphere. Scream Factory did a ton of work to get this one to Blu-ray, combing through six different prints belonging to private collectors to create a new HD master. It's available to watch for free on Shout! Factory's site; you can also stream a version with commentary by Andrew Davis. I really like this movie. (Watch free with ads on Shout Factory TV) 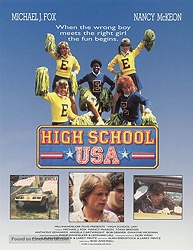 June 4: '80s Comedy! - High School USA (1983, dir. Rod Amateau) I'm not sure I can put into words what this movie meant to a very, very young me. As a little kid, I wanted to be Michael J. Fox (just kidding! I still do) and my first crush was on Nancy McKeon, so the thought of them in a movie together was more than my small(er) brain could handle. (For the record, most of this applies to the TV movie Poison Ivy, which was released in 1985, when I was more sentient; it wasn't until after I had seen that one that I learned Fox and McKeon had collaborated once before). This is one of those great made-for-TV movies that assembled all the young television stars of the time -- a tradition I miss. The cast includes not just Fox and McKeon, but Anthony Edwards, Crispin Glover, Todd Bridges, Crystal Bernard, Dana Plato, Jon Gries, Bob Denver, Dawn Wells, Tony Dow (all the adults are played by old-school TV stars) and Michael Zorek, famous early '80s chubby guy best known for Private School. This movie is so crazy fun. I'm so excited that it's available for streaming. (Watch on Amazon Prime Video) 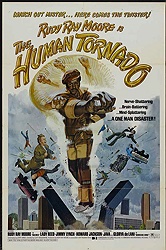 June 5: Blaxploitation! - The Human Tornado (1976, dir. Cliff Roquemore) Our very own Heath Holland just wrote a great piece on this Rudy Ray Moore vehicle, so please see what he has to say before you go and take my recommendation. Moore's follow up to Dolemite isn't my favorite of his very specific kinds of movies (arguably an acquired taste); that would be Petey Wheatstraw. But all of Moore's films are fun if you know what you're in for and take them on their own terms. If you're not a fan of Moore or if you don't have an Exploitation.tv subscription, I recommend the great Black Shampoo on Amazon Prime Video. It's one of my favorite blaxploitation movies. If you're bored by some of the softcore sex early on, be sure to stick it out for the chainsaws. (Watch on Exploitation.tv) 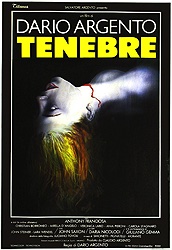 June 6: John Saxon! - Tenebrae (1981, dir. Dario Argento) There are really too many movies to choose from on John Saxon day. I came really close to recommending Moonshine County Express on Amazon Prime Video because it's crazy entertaining and has Saxon AND Claudia Jennings AND Maureen McCormick. It's great. But I'm going with Tenebrae, one of my very favorite Argento movies and one of my favorite giallo films period. Saxon's bit with his hat is one of my favorite things he's ever done in a movie. I love how many exploitation and genre movies he wound up doing in his career. (Watch on Shudder) 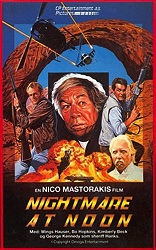 June 7: Free Space! - Nightmare at Noon (1988, dir. Nico Mastorakis) I just saw this for the first time courtesy of Scream Factory's Blu-ray, and it's crazy fun.  I know you can watch literally anything today, but I thought a violent zombie outbreak action movie starring Bo Hopkins and Wings Hauser and directed by the guy who made Island of Death -- the killer incestuous siblings movie -- practically summarizes everything that's great about Junesploitation in the span of just one film (Watch on Amazon Prime Video) 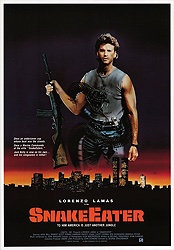 June 8: '80s Action! - Snake Eater (1989, dir. George Erschbamer) Hard to believe I'm going to recommend the movie that tried to turn Lorenzo Lamas into an action star, but here we are. There are way better '80s action movies than Snake Eater, but this is the kind of junk that's totally in the spirit of the month. I'd probably like it even more with a different actor in the lead, but it's still super watchable and a slight change of pace for those of us who have already seen all of the usual suspects a bunch of times. Spoilers: he does not eat a snake. It's bullshit. (Watch free with ads on Vudu)
Posted by Patrick Bromley at 12:00 PM