Off the Shelf: BLACK EAGLE 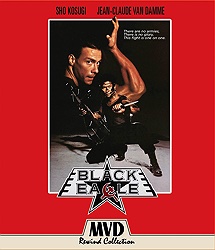 Jean-Claude Van Damme had already made a handful of movies by the time Black Eagle was released in 1988. There's that famous shot of him dancing as an extra in Breakin' and a couple of other background parts, plus his breakout role as the bad guy in No Retreat, No Surrender. Heck, even Bloodsport came out the same year as Black Eagle, setting him on what would be his career path for the next 30 years. The gears of the Van Damme machine were already in motion: like Arnold Schwarzenegger before him -- coincidentally another immigrant who was well known as an athlete before going Hollywood -- he was going to be a movie star through sheer force of will.

I bring all of this up because if he hadn't already been on his way, I suspect Black Eagle would have put him on our radar. As the movie's top evil henchman Andrei, Van Damme is the thing that pops off screen most: he's handsome and charismatic and has a couple of good fight scenes and busts out his trademark splits a couple times. As much as I enjoy Sho Kosugi movies Van Damme wipes him off the screen. 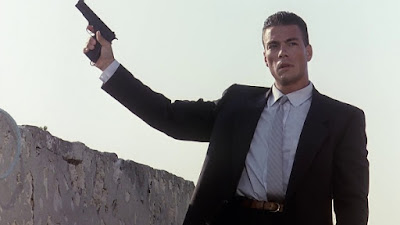 Kosugi plays Ken Tani, a special government operative code named "Black Eagle" who is called into action when the Russian government shoots down a new experimental tracking device over Malta. Knowing that it must not fall into the wrong hands -- namely, Colonel Vladimir Klimenko (Vladimir Skomarovsky) and his number two, Andrei (Van Damme). Tani brings his two sons (Kosugi's real-life sons Kane and Shane) and a CIA agent (Daren Clark) to Malta to track down the device before the Russians get to it.

Sho Kosugi is like the Japanese Chuck Norris: a good fighter with a ton of training and very little presence on screen. The movies in which I've liked him best are Cannon's Ninja trilogy. In the first, Enter the Ninja, he's the villain and hardly speaks; in the second, Revenge of the Ninja, his stilted acting style feels of a piece with the rest of the movie around him; in Ninja III: The Domination, he takes a supporting mentor role for which he's well suited. The majority of his other movies seem to swallow him up, which is the case in Black Eagle. I love his sincerity and the fact that he casts his kids is very sweet, but all of them read as totally flat on screen. It's the mistake of not really establishing a screen persona for Kosugi and trying to make him an American-style action star: he lacks the humor of a Jackie Chan and the stoicism or intensity of a Jet Li, meaning we're left with "guy who fights." The '80s had a lot of those guys, and while few of them could fight better than Sho Kosugi, nearly all of them are better on screen. 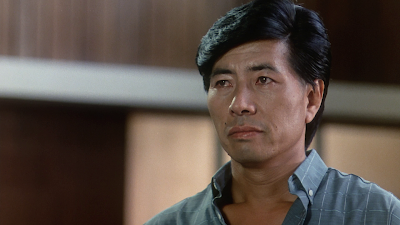 The flatness of Kosugi's performance extends to the rest of the movie, which traffics in a lot of generic '80s actionisms (down to the Russian bad guys) but comes alive only during the fight scenes or when Van Damme is on screen. The locations are lovely, but director Eric Karson rarely takes advantage of the natural backdrops, shooting in a lot of closeups and choosing sets that often look similar to one another. The movie is oddly pokey; I don't expect well-developed characters or relationships or intricate plotting in these movies -- there are plenty of action movies from the '80s I love that have none of these things -- but Black Eagle doesn't quite understand how to play to its strengths. The material is bad, sure, but plenty of good (or at least fun) movies have been made from bad material. What Black Eagle needs is the Cannon spirit of schlock.

Though it's been available on Blu-ray for some time in the UK, Black Eagle is making its Region 1 Blu-ray debut as part of MVD's "Rewind Collection," which contains titles as varied as Return of the Killer Tomatoes, The Return of Swamp Thing, and Savannah Smiles. There doesn't seem to be much rhyme or reason to what becomes part of the Rewind Collection, but they're doing a nice job bringing the movies to Blu-ray. In addition to two cuts of the movie -- the 93 minute theatrical cut and an extended cut that runs 104 minutes -- the disc contains a number of really cool featurettes: "Sho Kosugi: Martial Arts Legend" interviews the star and his kids; "Tales of Jean-Claude Van Damme" features people who worked on the movie sharing stories about Van Damme (who is nowhere to be found in the supplements of the disc); "The Script and the Screenwriters" talks to director Karson and the film's writers," and "The Making of Black Eagle" is a really fun retrospective doc that runs about 35 minutes and catches up with most of the major participants. There are also a couple of deleted scenes and the original theatrical trailer, as well as a standard def DVD copy of the movie and a collectible poster contained inside the disc case. 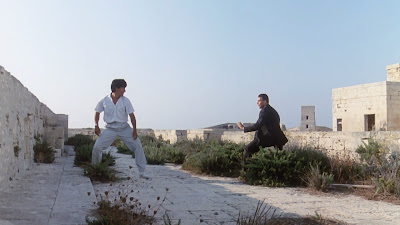 As a JCVD lover and student of his filmography, I like seeing him young and hungry in Black Eagle, commanding the screen to such a degree that even his romantic subplot with a fellow Russian is not only given screen time, but is also somehow the most well-developed relationship in the movie. Watching him and Sho Kosugi square off against one another is worth the price of a ticket alone. The rest of the movie is fairly dull, but there's just enough to satisfy the #HeavyAction junkie in those of us who go for this kind of thing. If nothing else, it's a pretty good representation of '80s action -- for better and for worse.