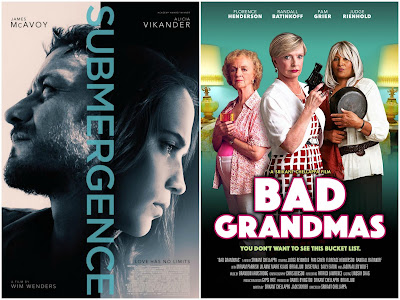 James McAvoy and Alicia Vikander are very attractive people. I mean, they’re movie stars. McAvoy has that wild-eyed Scottish smolder, an implacable vibe that lends itself to both the action/adventure lead and the drunken football hooligan. He’s equally aloof and accessible; smart, funny, and more than a little dangerous. Vikander, well. Monuments should be built. Songs written. Sonnets. Symphonies. As Twin Peaks’ Gordon Cole might say, she’s the kind of girl who makes you wish you spoke a little French. Why am I going on and on like this? Because Wim Wenders’ Submergence is almost entirely devoted to close-ups of these actors’ pouting faces, and your only hope of getting through the film is to accept and embrace that fact. Make it work for you. Submergence is one of those self-important Issue Romances that tosses its leads onto war-torn battlegrounds and deadly expeditions in an overwrought attempt to draw thematic parallels between love, conflict, death, God, poetry, existence, waves, submarines, coral reefs, fine cheeses, British accents, etc. You get it.

Danielle Flinders (Vikander) is a mathematician searching for life at the bottom of the sea. James Moore (McAvoy) is an intelligence agent hoping to infiltrate a jihadist group by posing as a water filtration scientist (you don’t know the technical nomenclature for this either, so shut up). They meet up at a French resort, flirt a bit, have some sexy time, and then make a firm agreement to needlessly pine for each other long after they go their separate ways. The film — very, very clearly based on a novel, in this case the 2013 one by J. M. Ledgard — crosses and intercuts between Moore’s capture and captivity, Flinders’ impending submarine dive, and flashbacks to the pair’s fireside liaison. From there, it’s mostly just meditations on various melodramatic topics accompanied by the aforementioned pouting.

Look, the long and short of it is that Submergence is bad, and there’s only one question to answer when assessing its value: Is it better or worse than The Last Face*? It’s better. No one should watch it, but it’s better than The Last Face. It’s shorter, a bit lighter, and it’s at least vaguely aware of how ridiculous it is. To wit: Flinders has a fellow scientist best friend named Thumbs (Celyn Jones) who occasionally calls her out on her mopey bullshit (she writes poetry while her team is diving toward the bottom of the ocean — I’m with Thumbs on this), and Moore has a few chats on religion and morality with Dr. Shadid (Alexander Siddig) that help us pass the time until Vikander’s next close-up. I know I’m supposed to have a bit more respect for Wim Wenders, the visionary director of Paris, Texas and Wings of Desire, but God saw fit to put his movie in my Redbox, and beautiful — and I mean beautiful — faces will only take you so far. 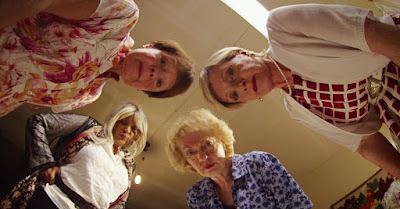 Speaking of finding God in the Redbox, the late Florence Henderson stars in Bad Grandmas, a Coen-esque farce co-starring Pam Grier, Susie Wall, and Sally Eaton as a quartet of rowdy old ladies out to settle family scores in time for their five o’clock rummy game. When one of their daughters is swindled by an insurance agent/con man named Jim (David Wassilak), Mimi (Henderson) confronts him with a gun that — twist! — accidentally goes off! The ladies chop him up (after Mimi, in the film’s best scene, brutally finishes him off with a butcher’s knife) and throw him in the freezer, expecting things to blow over. Little do they know that Jim’s partner Harry (Judge Reinhold) is looking for him and the $200,000 he was supposed to be filching. Also on the trail is Detective Randall McLemore (Randall Batinkoff), whose investigation of the Bad Grandmas is waylaid by Virginia’s (Eaton) beautiful daughter Ava (Miriam Parrish). Fumbled kidnappings, pot-smoking septuagenarians, and down-home Southern charm highlight this new comedy from Srikant Chellappa, who definitely wrote his own Wikipedia entry.

You’re not going to watch Bad Grandmas. You value your time too much. You have friends, family, people who fill your life with joy. We’re here together anyway, though, so let’s just talk about it. There are times when the film seems to know what it’s doing – pairing whimsical music cues with extreme violence, for example — but the gags and scenarios never extend beyond the initial premise of old women playing Pulp Fiction. They roll doobies and talk about porn! What else do you want? There are the occasional shades of something deeper, especially in Mimi’s late-game interactions with her estranged daughter, Lisa (Jilanne Klaus). There has to be a screenplay somewhere about grandparents will will go to extreme measures — even murder — to make the family happy. That would be more fun, wouldn’t it? A squad of grandmas patrolling the neighborhood, doing our grocery shopping and paying our parking tickets? You know how assassins have those hidden drawers with handguns and silencers? What if Mimi had a drawer with rows of crisp $10 bills ready to go in birthday cards? I’ve lost my mind, haven’t I? 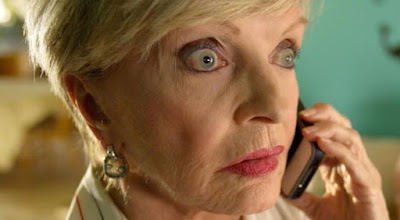 Henderson is the only real character in Bad Grandmas, but the Hollywood legend is bright and charming in her final performance (the film was shot in 2015 and shelved until late 2017). Randall Batinkoff is doing his best McConaughey as the swaggering, clueless sheriff, and Pam Grier’s frequent refrain that “the only good man is a dead man” recalls her Coffy and Foxy Brown days in dialogue, if not in action. If only she’d have been given anything to do. Anything at all. Actually, the film would pair nicely with another Redboxing classic, James Caan’s Undercover Grandpa. Both are high concept, TV quality productions too bland to understand or embrace the talent being wasted on screen. They’re made to fill up space, like the old video store days when movies were green-lit based on the box art. They’re made to produce a thumbnail that’ll sit next to other thumbnails on your Amazon Prime screen. Something to scroll by on your way to Paterson or The Big Sick. Something locked in a kind of digital purgatory until the monthly content purge shuffles it off into oblivion. Anyway, the grandmas get away with it.
Posted by Patrick Bromley at 12:00 PM