This is not a list of the very best horror comedies of all time -- although some of them are definitely here. No, these are the best warm weather horror comedies. The ones that you want to follow a barbecue at the park with. Ones that, after you're tired and dehydrated from being in the sun all day, you just want to collapse in front of your TV with the air conditioning blasting and laugh.

Sure, horror movies are for all times and occasions, but sometimes they can be a bit too gooey when you're already there yourself. My only qualification beyond their sun protection factor is that the comedy must be the focus over the horror elements.

Elvira: Mistress of the Dark 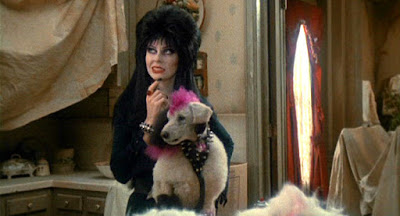 The sun kisses Elvira's alabaster skin aplenty in this, a movie I religiously rewatch every single summer. While Elvira will forever reign as queen of Halloween, this 1988 gem is set during what looks to be late spring: There's a picnic and everything! With Elvira putting jerks in their place in a bowling alley to a montage of a house getting painted, this is a cheerful, sunny ode to the macabre in that sad time period that isn't the fall. Think of it as a goth at the beach who will show up in a black parasol, but they'll also happily throw your beachball back to you. Sincerely funny and well-made, it's like a resort for character actors. Please note that its sister movie is Earth Girls Are Easy.

Return of the Killer Tomatoes 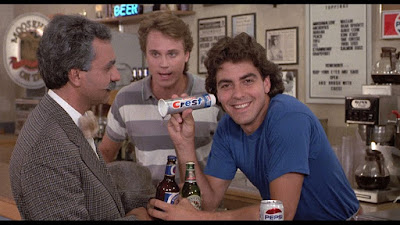 Don't worry! You don't have to watch the deadly dull Attack of the Killer Tomatoes to appreciate this one. While tomatoes are outlawed in Return thanks to the terrible events in the original, which gets rid of ketchup, which ruins hot dogs, which are the perfect summer food, this movie still makes it work. (Note: I know that deriding the original and putting ketchup on my hot dogs have made me a very controversial figure now, and I accept this role.) This goes full spoof, full goof, full fourth-wall-breaking and there's even a cute little furry mascot. With numerous scenes of pre-fame George Clooney squinting in the sun at babes, this is basically an orange creamsicle in movie form. 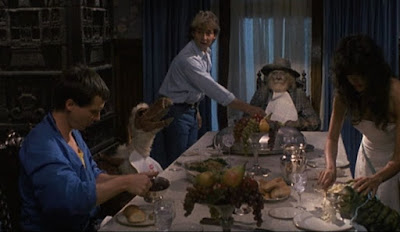 This is one of the rare occasions where I need to get a little precious with the timing: Steve Miner's House is a movie perfect for spring (and early autumn, full disclosure), and Ethan Wiley's House II: The Second Story is ripe for early summer. The goofier tone (cowboys! dinosaurs!) of House II demands the heat stroke whimsy of summer, and House has enough genuine creepy moments and pathos that you'll want an occasional cool breeze.

Tucker and Dale vs. Evil 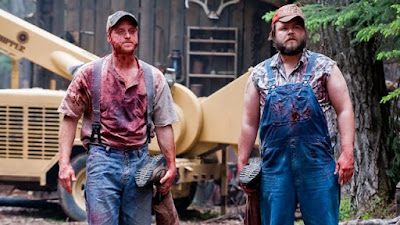 Ah, the great outdoors. Short-shorts, gore and well-meaning protagonists who are too young and attractive to ever suspect that they'll meet a grisly end in the summer sun. Alan Tudyk and Tyler Labine are adorable as two sweet country boys caught in an unending cycle of deadly mishaps that paint them as classic hillbilly serial killers, and the clever plot mixed with their relentlessly bewilered and cheerful performances make this a must for gory summer fun. It's truly laugh out loud hilarious, and it's a perfect example of not letting a high-concept idea get in the way of a great movie.

While a lot of more recent comedic horror films that have been released recently have been wonderful, they miss that sweat-soaked-into-your-denim-shorts feeling, but TDvE captures it perfectly. BONUS: Chelan Simmons, of the Ashley and Ashlyn tanning bed death fame in Final Destination 3, is one of the unlucky campers in this movie. Summer! 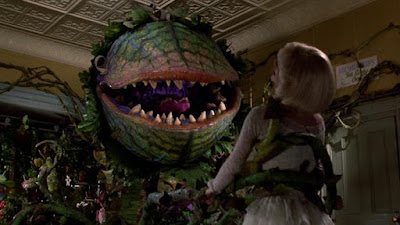 Both the Roger Corman 1960 and 1986 Frank Oz musical remake bring some much-needed shade to the sweltering months, though I do recommend watching the black and white original in the early evening. There, a young Dick Miller leads a movie that's as arguably funny as its splashy musical remake, but in a no-budget quirky way. Filled with early days Corman mainstays, the balance of black humor, mild slapstick, and absurdity make it a quiet, goofy treasure, and it's unfortunately overlooked too often when factoring in how well its remake did. Made directly after (and using many of the same sets from) the equally delightful Bucket of Blood (one of Miller's best roles), there's a freewheeling repertory theater feeling at work here that gives it a great, fun lightness.

The 1986 version is maybe the easiest sell of all: pitch-perfect comedic performances from a top-shelf cast, memorable songs from Alan "all the best 90's Disney songs" Menken and a complete gonzo disregard for subtlety, it's a fun, mildy sadistic movie that leaves the viewer feeling refreshed afterwards. 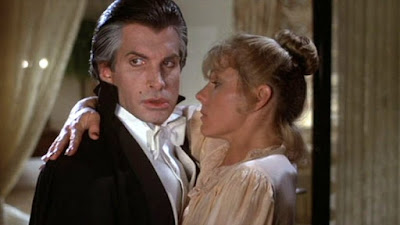 Legendarily tanned George Hamilton as a vampire? You mean he can't go out into the sun?! This hilariously dated concept had to be the sole reason this film was made, but thank goodness it was, because it's a real charmer. Similar in vein (heh) to Once Bitten, My Best Friend Is A Vampire and, if you squint, Dracula: Dead and Loving It, vampire spoofs and goofs used to be a hot commodity. What that gives you is the levity of a late '70s spring break movie, the spooky visuals of a regional horror host show, and the humor of a third-generation Airplane knock-off. If that sounds appealing rather than horrible, you're my kind of people, and you're probably this movie's kind of people. Also featuring Sherman Hemsley as a reverend, discos and actual turning-into-bat humor (which, let's face it, is often forgotten about even though it's essential in a truly memorable vampire farce), this is a frosty wine cooler in movie form. 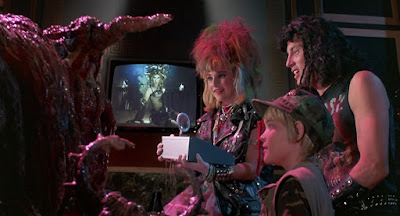 It's Saturday night. School is out for the summer. After a long day, you just want to curl up with some popcorn in front of your favorite busty horror hostess. You want to see something.... different. Something weird. Something that looks like a box of Crayolas simultaneously melted and exploded all over the film print. Maybe something directed by someone who directed some of the best Full Moon movies... you know, like Bad Channels and Subspecies. Something with a beautiful-cute '80s actress that elevated everything she was in... let's say Diane Franklin. What about a beloved character actor? Like that guy who played Beef in Phantom of the Paradise? Sure! Add in a Corman legend—Mary Woronov always being the best choice—and you have a perfect, sugar-coated weirdo alien movie that throws in a heavy metal Jon Gries just to ensure that you fully fall in love with it.
Posted by Patrick Bromley at 12:00 PM