If you’ve got an appetite for life…Stay Hungry.

Set in Birmingham, Alabama in 1976, Stay Hungry tells the story of a real estate group that’s buying up all the property in a local district for redevelopment. YAWN! But wait, the last building on the block is a small gym that serves as the hangout for an interesting and eclectic group of patrons. Jeff Bridges plays Craig, a local who has betrayed his roots and gone over to the corporate side of things. It’s Bridges who is sent to persuade the gym owner to sell the place to his company. In a predictable turn of events, he quickly becomes attached to the people that frequent the gym, particularly an employee named Mary Tate, played by Sally Field.

There’s nothing particularly new or novel about this premise: big shot guy mingles with locals in a small town and is seduced by a simpler way of life and how gosh-darn decent everybody there is. You can see it in Doc Hollywood. It’s also the basis of Pixar’s Cars. It’s probably in a hundred or a thousand other movies. But what makes Stay Hungry worth watching is the ensemble cast and the chemistry that they have with each other. 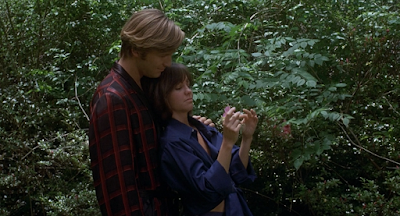 Jeff Bridges is always watchable, and he brings something different here than he did to King Kong, which we’ve discussed earlier in this series. He doesn’t just look different; he’s a different guy in this movie, and completely believable as a young man torn between pursuing financial success and what his heart wants. On the other hand, Sally Field is an actress that I sometimes struggle with, and I’m not sure why. Here, as in 1977’s Smokey and the Bandit, she’s cast as the feisty sparkplug with small-town charm who isn’t afraid of getting into a little trouble. Maybe it’s all the Sally Field movies I’ve seen over the years, but I’m never convinced by her in those portrayals. She seems too pure to be a rebel, and attempts to separate her from her wholesome image tend to fall a little flat for me. That’s the case here, though this film isn’t as far outside the box as Smokey and the Bandit.

Where Stay Hungry really soars is through the rest of the ensemble cast. This is 1970s character actor heaven. We’ve got a young Robert Englund (Freddy Krueger) in significant role, R.G. Armstrong (White Lightning, Predator) as the gym owner, Helena Kallianiotes (Five Easy Pieces) as a martial arts instructor, Roger E. Moseley (T.C. from Magnum P.I.), Woodrow Parfey (The Outlaw Josey Wales, Dirty Harry), Scatman Crothers (The Shining), Joe Spinell (Rocky), Dennis Fimple, who was also in King Kong with Jeff Bridges as well as Creature From Black Lake, both from 1976, and even a short appearance from Ed Begley Jr. It’s like all the character actors in Hollywood showed up for the audition and everyone got a part. 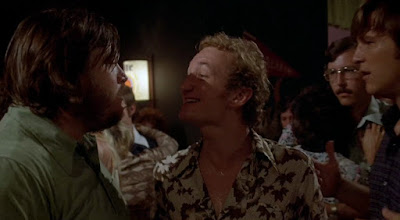 Then there’s Arnold Schwarzenegger in a role that won him a Golden Globe for Best Acting in a Debut Motion Picture. Of course, this was not really Arnold’s movie debut, but it’s certainly the first movie where he really gets to do much of anything approaching acting. He’d been Hercules before this (with his voice dubbed), and even played some background characters, but this is the movie that gives us what I’ll call the “Full Ahnold.” Before he was Conan, before he was a terminator, even before he drew notoriety as the body builder in the documentary Pumping Iron, Arnold Schwarzenegger played Joe Santo, a patron of this little gym in Birmingham, Alabama. It’s a surprising performance because he’s not playing the kind of caricature that we associate with the action star. Here he’s a bodybuilder who is clearly overcoming his emotional insecurities by developing his exterior. There are levels to this character. There’s even vulnerability! He’s not cracking jokes and giving one-liners. He doesn’t crush anyone with a barbell and say “you look like you’ve put on some weight.” He’s just a dude who seems kind of lonely and finds purpose and fulfillment at this gym. I don’t want to overhype it, but Arnold comes across as really human and really likable. He’s a big reason to watch this movie.

Autobiographically, this one is kind of weird for me because I live close to the area in which the film is set. It’s nice to have a movie set in the south that features real estate development, a progressive corporate presence, and encroaching urban sprawl instead of cowboy-hat-wearing good ol’ boys who run moonshine from cops that say things like “yee dawgy,” but there are still elements that seem completely foreign to me. For instance, there’s a hoedown that takes place about half way into the movie in which everyone goes out to a field and dances to fiddle music. Granted, this movie is a little bit before my time, but I’ve never been invited to a single hoedown in my entire life. I’ve never even seen anyone play a fiddle in a field. Actually, I don’t think I’ve ever even seen someone play fiddle at all! Am I hanging out in the wrong places? All the country music featured in the film sounds like it’s from The Country Bear Jamboree, and I wonder if this movie represents a snapshot of a changing Alabama or if this is just Hollywood’s view of the south. I recognize the geography, but the culture is foreign to me. 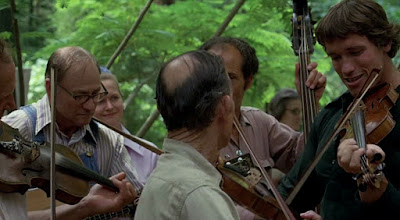 This movie also features *literally* the worst opening narration I’ve ever heard in my entire life as someone reads a letter to Jeff Bridges’ character. In theory, it’s supposed to tell us that he comes from a powerful southern family and has left his home to go pursue big successes in the business world. In actuality, it’s abysmal in its delivery, read to sound like one of those old Civil War letters from a Ken Burns documentary. The elderly actor reading the lines even seems to fall asleep between words. It goes a little something like this: “My dearest golden baby boy………………….by now you have taken a job…………..far from home……….where you will always belong………………among old money……………….sitting on a rocking chair………………….sipping mint juleps on the front porch………….talking about the glory days of General Lee…………………and the market price of cotton…………….when will you stop running……….come home soon, golden baby boy……………..where you belong……………..we’ll leave the light on for you.” Utterly insufferable. This cracklin’ country dialogue comes to us courtesy of first-time screenwriter Charles Gaines (adapting his own novel) and his writing partner Bob Rafelson, who also directs. Charles Gaines is the guy that followed Arnold Schwarzenegger around for the year following this movie as the bodybuilder worked hard to gain competition weight, which Gaines wrote about in the book version of Pumping Iron. Bob Rafelston had a little bit more of a promising career, having directed the 1968 cult classic movie Head, starring The Monkees, and The Postman Always Rings Twice in 1981 starring Jack Nicholson and Jessica Lange. 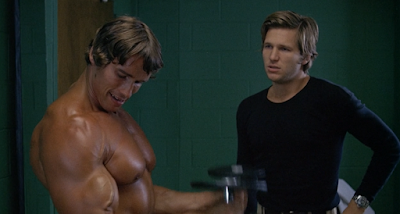 Time seems to have largely forgotten Stay Hungry. That’s a shame, because it’s a flawed movie buoyed by a very likable ensemble cast. Owing to the fact that it was shot on location in an unconventional city far from Hollywood, as well as the fact that most of the story takes place in or near a tiny urban gym, it very much has its own vibe. It’s a little bit like Michael Bay’s Pain & Gain except that only a few of the characters are douche bags instead of all of them. As I often say when I write about these movies, the films from 1976 feel completely different from any other time in movie history. Jeff Bridges, Sally Field, and Arnold Schwarzenegger were young talents on the rise when this movie was made, and are still making movies today, over four decades later. Furthermore, like so many other 1976 films, this is ultimately a character piece driven by strong, three-dimensional personalities. It’s just another example of what makes these films special, even all these years later.


Get more Heath Holland at his blog Cereal at Midnight!
Posted by Patrick Bromley at 5:00 AM