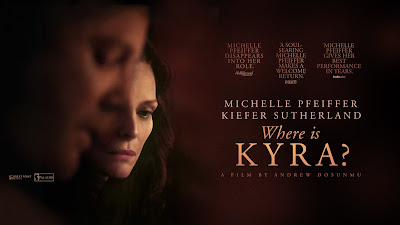 And why isn’t anyone talking about her movie?

There was a time when a movie like Where Is Kyra?, the newest offering from Nigerian filmmaker Andrew Dosunmu, would be a midsize commercial hit. It’s a quiet drama for adults boasting two dependable marquee names (Michelle Pfeiffer and Kiefer Sutherland) and gorgeous cinematography from acclaimed DP Bradford Young (Arrival, Selma). It’s a smart and sad story about loss, aging, hopelessness, and desperation. It might not sound like the feel-good hit of the summer, but movies like Where Is Kyra? have been sorely missed in our mainstream landscape since the billion-dollar tentpole model took over. Instead of getting a wide release, Where Is Kyra? premiered out of competition at the 2017 Sundance Film Festival, saw a limited theatrical run, and came to home video and streaming platforms on July 3rd. This feels unjust, but since I almost reviewed Tara Reid’s Bus Party to Hell this week, I’ll instead consider it a reward from the Redboxing gods for my endless devotion to their cause. Where Is Kyra? is a remarkable surprise, one of my favorite movies of the year. 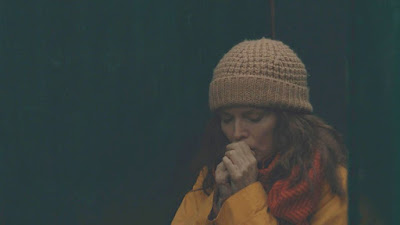 Kyra Johnson (Pfeiffer) is in dire straits. The middle-aged divorcee is unemployed and under-qualified, relying solely on her bedridden mother’s (Suzanne Shepherd) pension to survive. In her best business attire — all of it a little worn, a little too small — Kyra shuffles from one unsuccessful job interview to the next. Typing, filing, waitressing, really anything will do, but no one’s biting. “I’m looking every day. There’s nothing out there,” she repeats to herself and anyone who gives her guff. “I’m not exactly a spring chicken.” It’s a brutal reality made even worse when her mother finally passes away. Now truly alone, Kyra is reduced to selling off her furniture and handing out flyers for minimum wage (“and praying I still have that tomorrow,” she says to her ex-husband [Sam Robards] when she begs him for cash). All seems lost until Kyra discovers that a clerical error is keeping her mother’s pension checks coming even after her death. With the help of Doug (Sutherland), Kyra decides to impersonate her mother to stay afloat.

As much as this may sound like the setup for a heartwarming slapstick comedy, there’s nothing zany or madcap about Kyra’s scheme. She and Doug — who’s equally down-and-out, working several part time jobs and using alcohol to cope with the loss of his family — feed on each other’s stress and anguish as they spiral toward destruction. Their awkward flirtation gives way to a toxic codependency: Minutes after scolding Kyra for lying to him, Doug is helping her put on her mother’s oxygen mask and lying to detectives about his role in her life. He knows better, but what choice does he have? What else is he doing to better himself? The walls are closing in on both of them, they know, and neither harbors any delusion about escaping their lot. They only hope to inch along enough to live to fight another day. Again, this makes Where Is Kyra? sound like a miserable viewing experience, but anyone who’s ever counted the change in their piggy bank or paid for a sandwich with a credit card will empathize with its message. 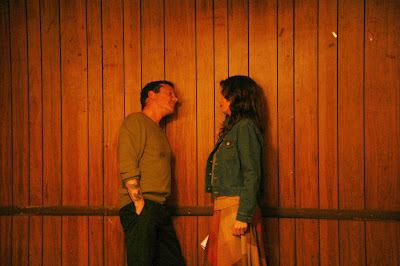 The movie’s visual palette is even more immersive. Dosunmu and Young embrace stillness and shadow, emphasizing natural lighting and a cold, indifferent frame that feels off-center and uncomfortable at times, almost as if the movie knows it’s peeking in on something it shouldn’t be. Editor Oriana Soddu follows suit: interactions between characters rarely go into conventional coverage, instead staying on Pfeiffer as she struggles through a tortured close-up or on the space around her (sometimes wide and barren, sometimes oppressively claustrophobic) as she tip-toes her way through it. This is rarely showy, though, and even the most off-kilter shots manage to not draw attention to themselves. Phillip Miller’s soundtrack compliments the visuals by pairing eerie, discordant notes (reminiscent of 2017’s mother!, also starring Pfeiffer) with long and haunted silences that become completely unbearable during the movie’s tenser moments. Conventional wisdom tells us that motion pictures are supposed to, well, move, but Where Is Kyra? proves that the stillest of frames can bore into our memory just as effectively. 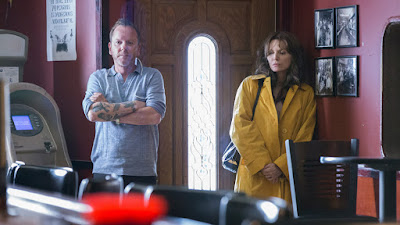 None of this would matter if not for Michelle Pfeiffer’s stellar lead performance, which (again) would be getting serious buzz had this been a mainstream release. Kyra is anxious, tired, and in over her head. She’s doing everything right, she maintains – smiling at potential employers, filling out the appropriate forms, and making solemn promises to her landlord that she needs just One More Week. We like Kyra; we feel her pain when — after acing an interview — she knocks over a pencil cup and bends down to reveal her unzipped skirt (like everything in her wardrobe, it’s too small). She’s ashamed, embarrassed. She’s inches short of every opportunity, and she’s starting to come unhinged. There’s a grim meta quality to watching one of the biggest female movie stars of the ‘80s and ‘90s lament the absence of suitable “roles” to play in middle age, and the fact that she’s forced to dress as her much older mother to survive (women in Hollywood are either 25 or 75) almost tips the movie over into black comedy. Kyra makes terrible choices, but they’re the only ones she has.

Despite all the possible textual interpretations, Where Is Kyra? manages to avoid sweeping or preachy statements about the decaying American Dream or a lone woman’s place in a cruel and unforgiving modern economy. Dosunmu and co-screenwriter Darci Picoult (who also collaborated on 2013’s Mother of George) keep the story and tone grounded, letting the audience do the work as they see fit. The movie doesn’t judge Kyra, even when its characters do. It doesn’t tell us how to feel about her or insist that she’s been unfairly treated by the System. No one thinks about the System when they’re haggling for an extra $10 for yet another precious family heirloom. No one researches sentencing guidelines when they’re forging their dead mother’s identity to pay down four months of overdue rent. Where Is Kyra? has no illusions about the world or the people in it, and we should expect nothing less than the truth, however cold and unforgiving that truth may be.
Posted by Patrick Bromley at 12:00 PM