“Before Rhett kissed Scarlett. Before Laurel met Hardy. Before Butch Cassidy met the Sundance Kid. Before any movie ever made you laugh or cry or fall in love. There was a handful of adventurers who made flickering pictures you could see for a nickel.”

Hollywood in the mid-seventies was feeling nostalgic. Between 1974 and 1977, Tinseltown created no less than nine movies about the early days of the motion picture industry, so clearly there was something in the air. Peter Bogdanovich’s Nickelodeon shines a flickering light on the era of the silent short of the teens (that’s the nineteen-teens), when cowboy heroes faced savage natives and comedy giants made people laugh with outrageous shenanigans and physical stunt work all within the span of a reel or two. To help tell his story, director and co-writer Bogdanovich casts Ryan O’Neal (Love Story), Tatum O’Neal (Bad News Bears), and Burt Reynolds (Deliverance). The elder O’Neal plays a man who stumbles (literally) into movie directing. Reynolds plays his biggest film star, and Tatum O’Neal plays a young girl with uncanny maturity (a talent she shared with Jodie Foster in the seventies) that ends up being a driving force behind the creative process. Each of these people are well-cast for their strengths and were based on real-life early Hollywood figures. As you might expect, Burt Reynolds steals the show. 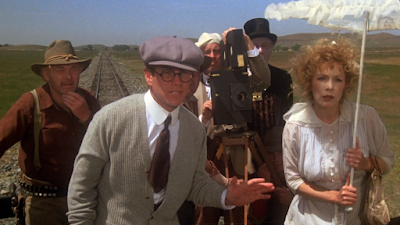 Here’s the thing. I’m very interested in early Hollywood. As a cinephile and pop culture fan, the creation of the film business itself is a fascinating subject to me. I’ve visited D.W. Griffith’s grave (with JB, no less) and I’m captivated by the nooks and crannies of cinema history, the legends, the lies, and the cover-ups. I’m interested in early stars and in the shorts that built an industry. Furthermore, I’m a big Burt Reynolds fan and would watch him in literally anything.

So why does this movie feel so empty?

Peter Bogdanovich is a guy that’s loved film his entire life. He spent years studying films, he’s written books about films, he’s appeared in films, and he’s directed something like 35 films himself. Because it’s directed by such an esoteric enthusiast, Nickelodeon is filled with old Hollywood “stuff,” including insider tales that depict how rough and tumble the early days of the movie business actually were. It takes real Hollywood stories (like John Ford’s legendary “three days behind schedule” incident—Google it) and modifies them slightly to fit into a different narrative. There’s no doubt about Bogdanovich’s passion, the truth behind the stories, and the real life inspirations for these colorful characters.

Yet something is missing. A reason for this story, maybe? There’s a very loose narrative in Nickelodeon: man stumbles into a job as a director of this new thing called moving pictures, he makes some of those moving pictures with his lead actor, falls in love with his lead actor’s wife (played by model Jane Hitchcock because Bogdanovich couldn’t cast his girlfriend Cybill Shepherd), everyone gets mad at each other, then try to work it out. That’s honestly and truly about all there is to pass as plot. The rest of the two-hour running time is filled with pratfalls, attempts at comedy that aren’t funny, and scenes filled with tons and tons of dialogue that go absolutely nowhere. I’m not sure what the goal was for this movie. It feels like a labor of love, but is missing key components to make us interested. 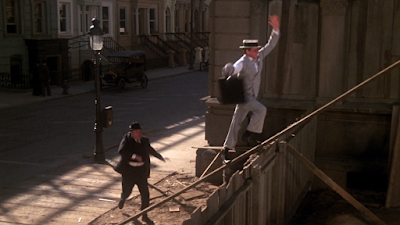 I suppose the script is really to blame. Not only is it not funny, but it’s also inconsistent. The first half of the movie is wall-to-wall bits and gags. Bogdanovich and his co-writer W.D. Richter (who wrote 1978’s Invasion of the Body Snatchers and contributed to the screenplay of 1986’s Big Trouble in Little China) seem to be not only telling the story of early film, but trying to make a movie in the style of early film, as well. That means lots of ragtime piano, titles on the screen instead of narration, and elaborately-staged gags, such as O’Neal fleeing a mob by walking on a board balanced over a picket fence. When he lands on the other side, his foot gets stuck in a bucket. It’s early comedy, see?

The whole first hour is filled with people talking far too loudly, too quickly, and saying way too much. Instead of scenes that lead organically into one another, we get a series of disconnected vignettes. Then a title comes on screen that says something like “One year later” and we’re off to some other location that we have no reason to care about because the movie hasn’t stopped to flesh out things like character, motivation, and pathos.

The second half of the movie rectifies this a little bit by giving us less bits and gags and more actual person-to-person interaction, but creates a wildly-inconsistent experience in the process. It’s in the second half of the movie that delves into the love triangle and the ups and downs of the film biz, taking our characters from early humble beginnings to more successful heights and a whole new set of challenges, which it doesn’t really seem interested in exploring. All of this is covered mostly through lip-service or narration via screen titles. One of the key rules of cinematic storytelling is show, don’t tell. 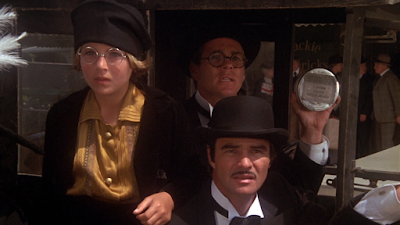 All of this hints at Bogdanovich’s limitations as a writer. In Burt Reynolds’ memoirs, But Enough About Me, the actor skips over Nickelodeon entirely, but he does devote a couple of paragraphs to Peter Bogdanovich, primarily concerning the filming of 1975’s At Long Last Love. Reynolds explains that Bogdanovich had made two wonderful movies in the early 1970s (The Last Picture Show and Paper Moon), but had started writing his own movies, which wasn’t his strong suit. Reynolds goes on to explain that Bodganovich knew an awful lot about movies and could talk about them forever, but that talking about a film and making a film are two different things. Reynolds recounts that most of the time spent on set consisted of Bogdanovich giving all the actors line reading and talking endlessly. Even though none of this is about Nickelodeon specifically, its characters talk endlessly at the movie’s expense, so it fits to me.

Bogdanovich had written seven books about film before he made this movie. It’s been suggested that his fellow critics never forgave him for making the jump from critic to filmmaker and that’s why the film establishment’s opinion of Nickelodeon isn’t very high. I can see how this could be possible, but the proof, as they say, is in the pudding. In this case, it looks like pudding and smells like pudding, but tasting this pudding reveals that there are a few ingredients missing.

Still, as tepid as it is, Nickelodeon is a good showcase for Burt Reynolds, who displays an entirely different set of skills from his other big 1976 movie, Gator, which is a gritty, redneck revenge film. It’s also worth mentioning that Reynolds appeared in Silent Movie, also from 1976 and covered earlier in this series. That film is Mel Brooks’ homage to his early influences and plays without any dialogue. Tellingly, Silent Movie displays far more character and personality than Nickelodeon. 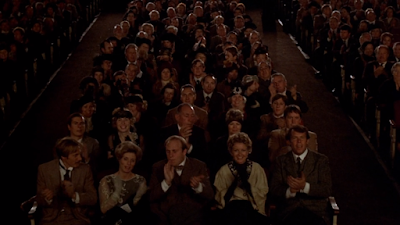 I haven’t spoken much about Tatum O’Neal, but she’s fantastic in this movie. She frequently not only holds her own against grown actors, but outshines them. The scenes in which she gets to act opposite her father are interesting, for their novelty if nothing else. Furthermore, this movie gives us some great turns from supporting players, including John Ritter as O’Neal’s camera man. Ritter was a true comedic genius, as evidenced in shows like Three’s Company, and he was steeped in Hollywood history himself as the son of Tex Ritter, another early Hollywood star, albeit one who came along well into the sound era. We also get to see James Best, perhaps most known as Roscoe P. Coltrane on The Dukes of Hazzard, and Lorenzo Music, the doorman on the TV show Rhoda, but also an icon to an entire generation of eighties kids as the voice of Garfield and Peter Venkman on 78 episodes of The Real Ghostbusters cartoon series. Eagle-eyed fans will even notice Hollywood tough guy Brion James in a courtroom scene early in the film.

It may sound like Nickelodeon is a bad film, but I’m not sure that’s the case. More than anything, it’s simply frustrating. It features likeable actors, a huge budget (nine million dollars, which is somehow more than 1977’s Star Wars), and a subject matter that is fascinating, but it doesn’t know what to do with any of it. It’s a lecture from a film professor that has a love of cinema, but can’t seem to convey to you why. It’s a history lesson left dead on a page instead of brought to life with color and passion. That’s the ultimate failing of this movie. The knowledge and the enthusiasm are there. It’s the telling that falls maddeningly short of the mark.