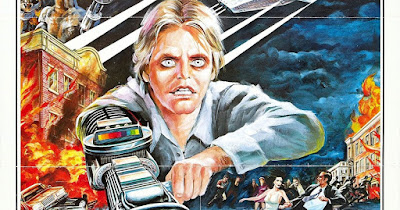 A lot of what would become Full Moon starts here.

The 1978 science fiction movie Laserblast is best known by most people as a 1996 episode of Mystery Science Theater 3000 -- the last episode the show aired on Comedy Central, actually. That means its reputation has been cemented as a "bad" movie, one to be enjoyed only ironically and hopefully with robots cracking jokes throughout. Much as I can enjoy MST3K and recognize just how important it has been in shaping the taste and humor of a lot of people I like, this is one of issues with the show: it has created a canon of supposedly terrible movies by virtue of them having appeared on an episode. That means that even to those who have never seen it, Laserblast must be terrible. It was on MST3K! 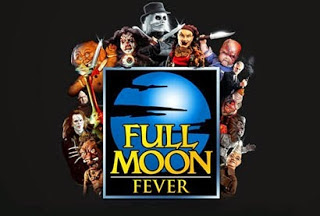 Made in the days before both Full Moon and Empire Pictures but produced by Charles Band, Laserblast is a major piece of the puzzle as far as both of later companies are concerned. It was an early case of Band coming up with a title and developing a movie from there, which was business as usual for a lot of exploitation producers but would become common practice for Empire and Full Moon going forward. It marked the first score composed by Richard Band (working here with Joel Goldsmith), who would provide the music for many, many releases from both studios. It's also Band's first collaboration with Dave Allen, who provides the stop-motion alien effects and would team with Band regularly over the next 20 years, doing effects for a number of Full Moon titles and even directing Puppet Master II. Band  announced at Chicago's Flashback Weekend a few years back that Allen's dream project The Primevals, unfinished for 20 years after Allen passed away in 1999, is now being completed and should be out sometime "soon." (According to Band's recently-released memoir Puppet Master, the plan is now sometime in 2022.) He even showed some of Allen's footage, and it looks incredible. Laserblast is the movie that brings much of the band (pun intended) together for the first time.

As the movie opens, a strange, mutant-looking man is wandering through the desert when an alien craft appears and disintegrates him, leaving behind the laser cannon attached to his arm. The gun is found by Billy Duncan (Kim Milford), a brooding teenager who is neglected by his mother, disliked by his girlfriend's family, and bullied by some of the locals. An alien laser gun is exactly what he needs to get revenge on his enemies! Keenan Wynn and Roddy McDowall have supporting roles, and Eddie Deezen makes his screen debut. 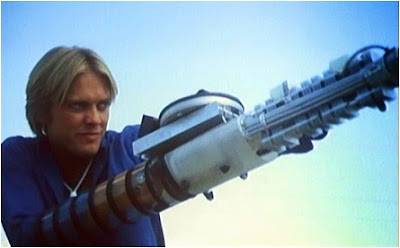 Despite its inclusion on MST3K, I don't think Laserblast is a bad movie. It's clumsy and it's very slow, but the simplicity of the narrative -- boy finds weapon, boy gets revenge -- and the weird tragedy of the whole thing makes it compelling enough to sustain its 80 minute runtime. I recognize that there are a lot of viewers who won't have the patience for the way director Michael Rae (here making his sole directorial effort) chooses to play the story out, and I can't blame anyone for that. This is, in many ways, a very typical 1970s exploitation movie in that it goes for long stretches with very little happening to help pay for the expensive payoff moments when things explode and catch fire. The waiting, as they say, is the hardest part, and while it can be cool and fun to watch all the shit blow up, there's a lot of padding before those beats happen. Its unfortunate glacial pacing and near total lack of dialogue make it perfect fodder for MST3K, because it gives Mike Nelson and the 'Bots lots of room to talk and crack jokes without confusing the plot or interrupting the flow of the film.
But the highs are high. Dave Allen's stop motion alien effects are terrific, because stop motion rules. The pyrotechnics are spectacular, coming from a time when physical effects were the only game in town and real cars really got blown up and started on real fire. At a certain point, the explosions basically become the plot, as Billy running around and shooting at things with his newfound weapon is all that's happening -- the movie's reason for being. Remember that scene at the end of UHF when Weird Al is imagining himself as Rambo and just flies around in a helicopter screaming and blowing things up? That's the climax of Laserblast, minus the screaming and the helicopter. 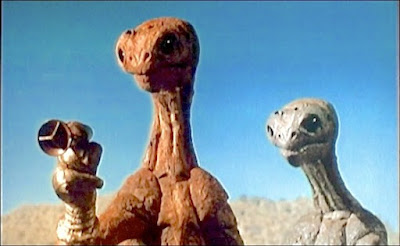 I also like Kim Milford's performance as the bullied Billy. He's got a generically handsome, California blonde thing going on in all of his 'normal' scenes, but when he goes full monster (a process that involves a metal plate that appears in his chest), he's got a great physicality that's part zombie, part ape, all weird. The exact science behind why this happens to Billy remains unclear to me; to be honest, it might have been explained by a character at some point, but despite having watched it 2 or 3 times Laserblast has consistently lulled me into a fugue state. The "why" it happens doesn't really matter, anyway. This isn't a movie about plot. This is a movie about a vibe and a lot of effects. In these areas, it succeeds. More importantly, it's a movie about assembling the pieces of what would become Empire and, later, Full Moon. Laserblast helps to sow the seeds of something special. 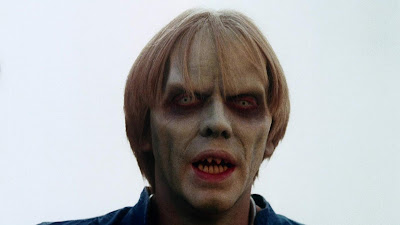 These days, Laserblast is probably best remembered as the last episode of Mystery Science Theater 3000 to air on Comedy Central before it moved to The Sci Fi Channel at the start of its eighth season. I would venture to guess that just many (if not more) people have seen it this way as saw it theatrically or as a cult item on VHS, though I may be grossly overestimating the audience for MST3K. Outside of that episode, it exists mostly as a curiosity for Full Moon fans such as myself who want to see the company's modest beginnings (you know, before its modest middle and modest present). I enjoy it as more than a historical document, though even I recognize that's probably the best context in which to view it. Or if you just want to see a lot of shit blow up. Either way.