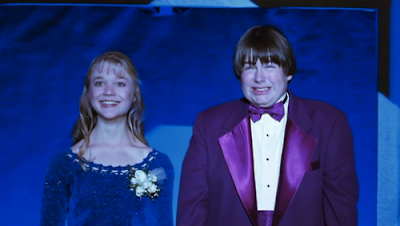 An underrated gem perfect for back to school season.

Back in 2014, Patrick wrote a great article where he listed his “10 Underrated New Line Movies from the ‘90s.” If I were to come up with my own list (nope), one I would recommend is the coming-of-age dramedy Angus. It’s a movie that meant a lot to me in late 1995 until I forgot about it completely in 1996. Like with most things, I blame Sega and puberty. Trailers online weren’t really a thing back then, so the way I learned about films coming out was when they had trailers before other movies. Angus’s trailer played before Mortal Kombat, and boy did I see Mortal Kombat a lot in the summer of ’95! When I saw Angus a month later, I loved it. It was hip (Green Day!) and heartfelt (Kathy Bates!). I was entering eighth grade (Gucci!) and this was one of the first movies that made me consider what high school would be like when I got there. Would I be popular? Am I going to get stuffed into a locker? Has anyone ever been stuffed into a locker in real life? It seems too small to fit a person. I would think you’d need some real cooperation from the stuffee to pull off that maneuver. I apologize in advance if anyone reading this was stuffed into a locker. That sucks. I was locked in a bathroom once if that’s any consolation. 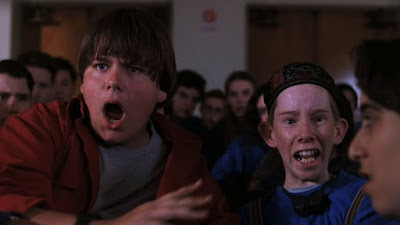 The plot in brief: Angus tells the story of a smart, overweight high school freshman named Angus Bethune (Charlie Talbert), who is decent at football and brilliant at science. Because of his size and nerdiness, he and his friend Troy (played by future Shermanator Chris Owen) are the subject of ridicule at the hands of golden boy quarterback Rick Sanford (James Van Der Beek in his film debut) and his devil minions (including future Gotti director E from Entourage). Angus has a long-standing crush on Rick’s girlfriend – the awesomely named Melissa Lefevre (played by Jurassic Park alumnus Ariana Richards). In a Carrie-esque ploy, Rick rigs the homecoming king vote (Melissa is fated to be homecoming queen) to humiliate Angus in front of the whole school. Will Angus go to the dance despite being ridiculed? Will he finally talk to Melissa instead of just admiring her from afar? Angus also stars Kathy Bates as Angus’s protective and supportive mother and George C. Scott as his gruff but wise grandfather. More on them soon; they’re both great in this movie.

One of the joys of looking back at ‘90s kids movies for me is to see how my perspective has changed over the years. Where once I was identifying more with the kid actor, now I’m identifying (naturally, of course) with the grown-ups. Angus works equally well from both sides and weighs the advantages and limitations of being young and older. For example, Angus is bullied in school and needs more self-confidence, but the film wisely knows that shaming doesn’t totally stop in high school. An interesting bit of characterization given to the George C. Scott is that he’s about to marry a woman much younger than he is and he gets all kinds of guff for that. Also, his “Screw ‘em, who cares what they think?” advice to combating naysayers is seen to only be somewhat effective. 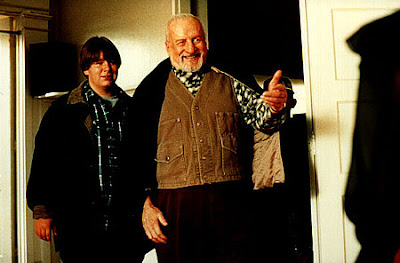 The Kathy Bates character is the most interesting one in the movie for me. She is strong and resilient but has certainly taken the put-downs in her own life to heart over the years. I love that the assumption is she probably had the same high school life as her son and she’s doing everything she can to help him avoid the hurt that she endured. In her, the audience sees what Angus will probably become temperament-wise as an adult no matter what happens at the school dance. Not everything will be fixed. The three actors form a very sympathetic on screen family, and seeing this support structure elevates the movie. Ariana Richards is also very good as Melissa. When Angus finally talks to Melissa at length during the dance, Richards gives her character an appealingly average personality – she’s consumed with the same level of insecurity that Angus is and recognizes a kindred spirit in him: they’re both just kids trying to get by the best they can. The film ends where it doesn’t even matter if the two become a couple; they’ve at least expanded their support network with a new friend who understands the other person.

I hope I’m not making Angus sound super heavy though. It’s fun, super '90s and contains many tropes I enjoy, such as:

• A pre-Varsity Blues James Van Deer Beek at QB. It’s like you get to see the bookends of his high school football career. What a double feature! 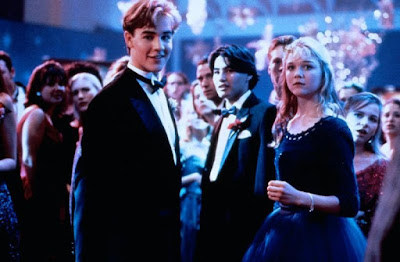 • Varsity jackets – so fucking cool. I still want to get married in one.
• An outdoor cafeteria called “The Lunch Box.” If my school had a “The Lunch Box,” good luck keeping me from going there every day. So hip!
• Kids dancing awkwardly on-stage to the song “Kung Fu” (by Ash) at an assembly for no discernable reason. This is the same song used in the end credits of Rumble in the Bronx – another New Line Cinema picture from a year later. Knock Knock. Who’s there? Synergy!
• Wordless Irvin Kershner cameo!
• The Green Day song “J.A.R.” is played about thirty times. Note: This is not a coincidence. Green Day’s then-producer Rob Cavallo was this film’s executive producer. Synergy is Win-ergy!
• A homecoming king and queen dance to “Fade Into You” by Mazzy Star, a song so goddamn beautiful you want to die inside of it.

Re-discovering Angus was a bit of a happy accident and the purest example why I love writing the ‘90s Kids Movie Club column. If anything, I hope it encourages some of you to check it out. Angus deserved a bigger audience.