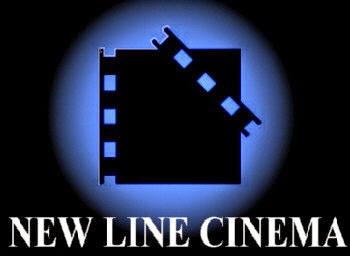 Once upon a time, New Line was the best.

New Line Cinema used to be one of the best and most interesting independent studios in the movie business. Originally started and run by Bob Shaye, New Line was known as "the house that Freddy built" because they had their first big success with A Nightmare on Elm Street and was kept afloat by the franchise during the '80s. They were the studio putting out genre movies when hardly anyone else was. They spoke to audiences that were otherwise ignored, be they horror fans, teenagers, black audiences -- you name it. They're also the studio that greenlit three concurrent Lord of the Rings movies from a cult director with no history of box office success and wound up making history in the process, racking up Oscars, changing the face of modern movies -- and eventually somehow going bankrupt. In short, they blew it.

Bolstered by mainstream successes like the Elm Street series and 1990's Teenage Mutant Ninja Turtles, New Line really came into their own in the '90s. They had a full slate of movies, many of which have rightly become classics. They eventually had more giant successes with the Blade and Austin Powers franchises. Here are some of the studio's best films of the '90s that don't quite get enough love. Check them out if you haven't already -- though if you're reading this site regularly, chances are you've seen them all. 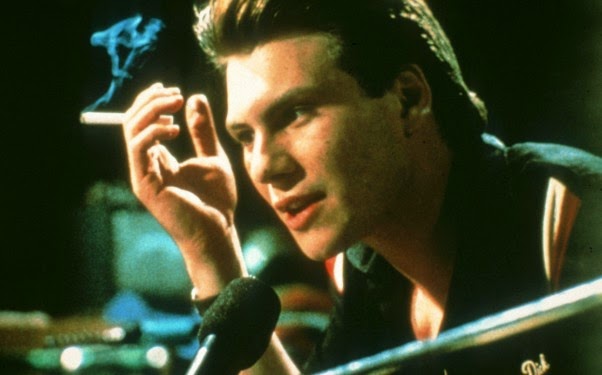 1. Pump Up the Volume (1990, dir. Allan Moyle) Christian Slater plays a shy high school student who secretly moonlights as pirate radio DJ Hard Harry in this movie that DEFINED MY YOUTH in the early '90s. This was the height of my C-Slate love (#kuffslife). The soundtrack introduced me to The Pixies and Bad Brains and Henry Rollins and Soundgarden. I'm pretty positive that Samantha Mathis' performance is directly responsible for a love of the tiny, dark-haired alterna-chick that I nursed for the better part of the '90s. JB maintains that this is one of the few Hollywood movies that actually gets high school right. What seems on paper to be a dumb movie about a heartthrob with a secret radio station is actually a pretty heavy drama about the generation gap, teenage suicide (don't do it) and how difficult it is to be young -- it's like a much darker, grittier take on the John Hughes movie. There's a lot about the movie that's dated now, but the emotional truths are still relevant. New Line was smart to put out a movie with a built-in teen audience that still earned critical respect. 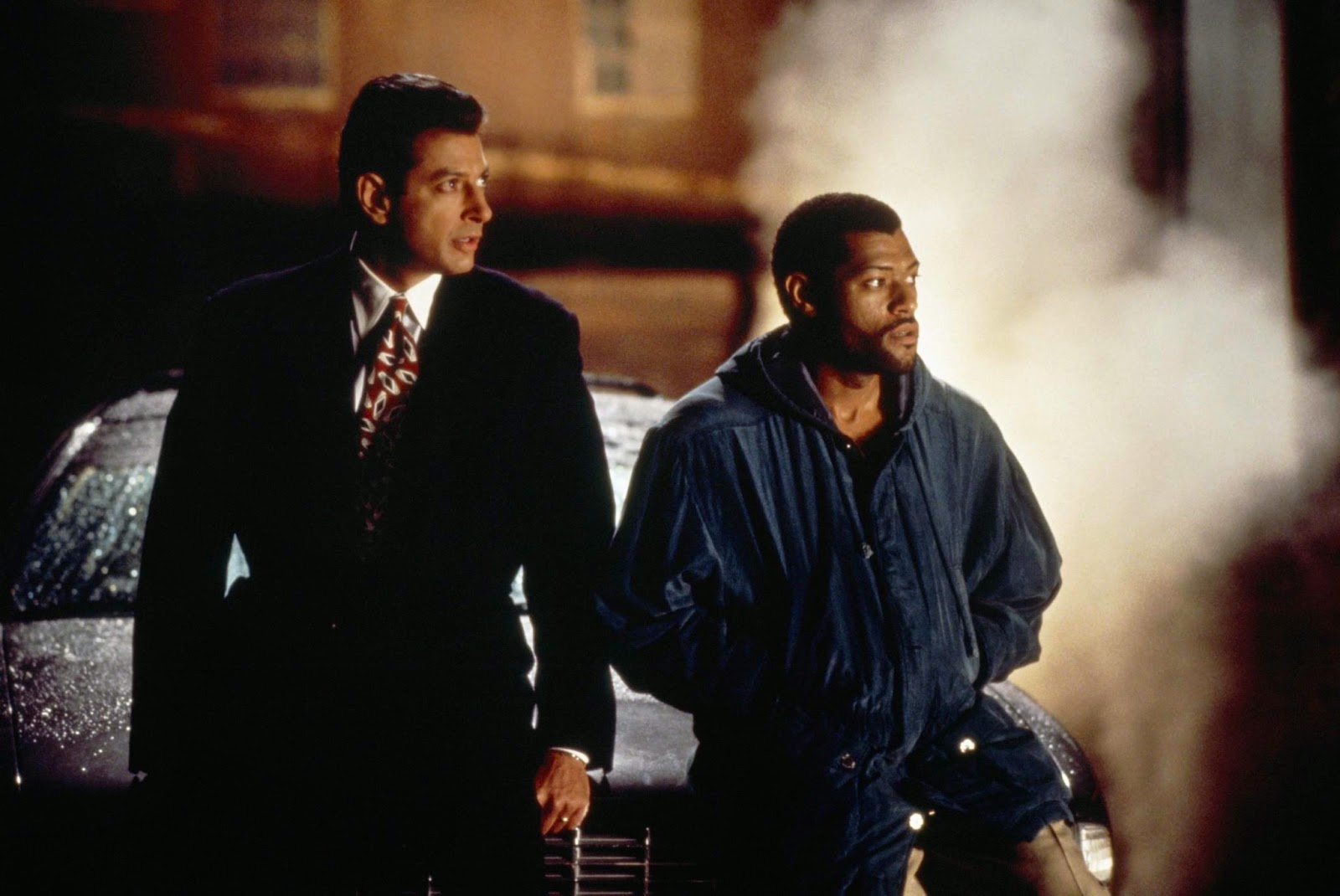 2. Deep Cover (1992, dir. Bill Duke) Moody, solid crime thriller with Laurence Fishburne as a cop who goes undercover as a drug dealer and buddies up to sleazebag lawyer Jeff Goldblum. New Line would eventually become home to a number of black filmmakers and specialize in movies made with black audiences in mind; while that doesn't exactly characterize Deep Cover, it's a good place to start. What seems like a simple genre movie is actually a densely layered character piece with a screenplay co-written by Michael Tolkin (who had previously written both The Player and The Rapture for New Line) and two great lead performances -- particularly from Goldblum, who is as good (if not better) than he's ever been. This is the kind of movie you rediscover on cable years after the fact and wonder why it wasn't a bigger hit. 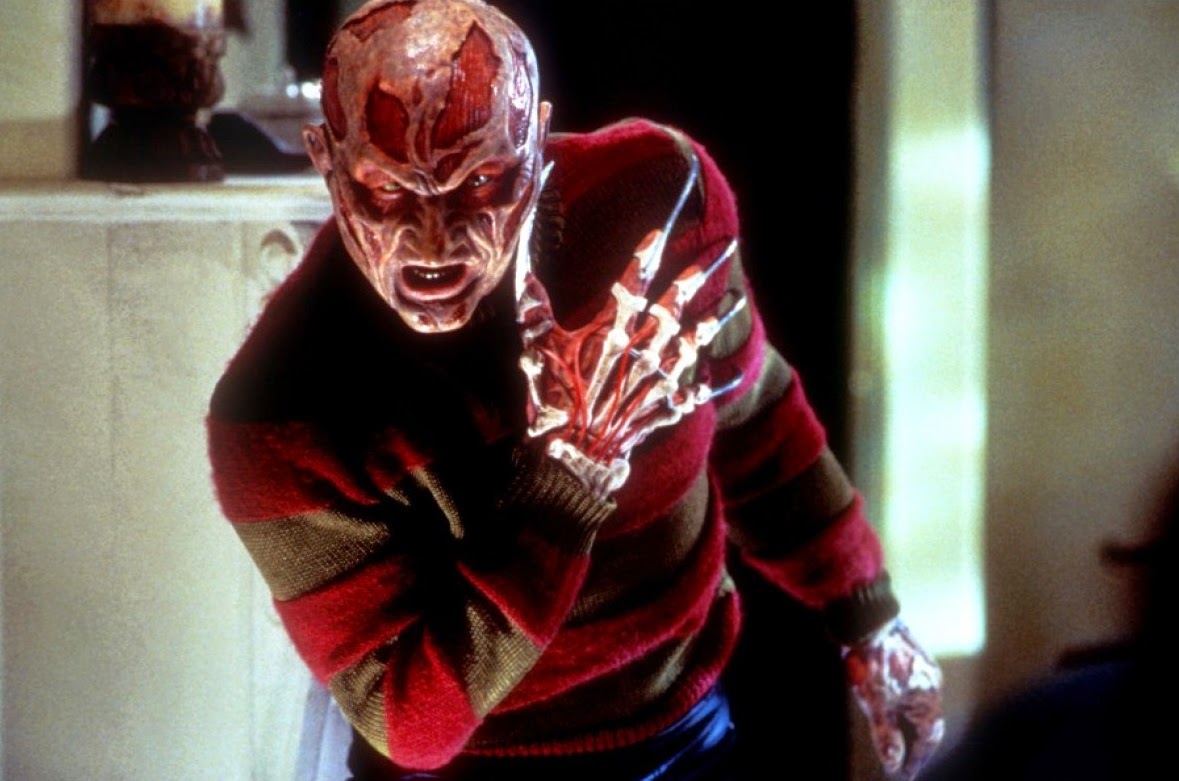 3. Wes Craven's New Nightmare (1994, dir. Wes Craven) The best Elm Street movie after the original, Wes Craven's post-modern return to the series he created casts Heather Langenkamp, Robert Englund, New Line president Bob Shaye and more as themselves being haunted by a demon created by the actual making of the films. It's an ingenious premise and explores a lot of the same meta, self-referential stuff that Craven would find much more success with two years later in Scream. This is a movie much more interested in ideas than in visceral scares (though there are a few of those as well), with lots of interesting things to say about our relationship to movies and what we get out of horror. It's easy to understand why this wasn't a huge box office success (it was the lowest-grossing film in the franchise), as it's a movie that's better studied and written about than casually enjoyed. This is one of Craven's best. 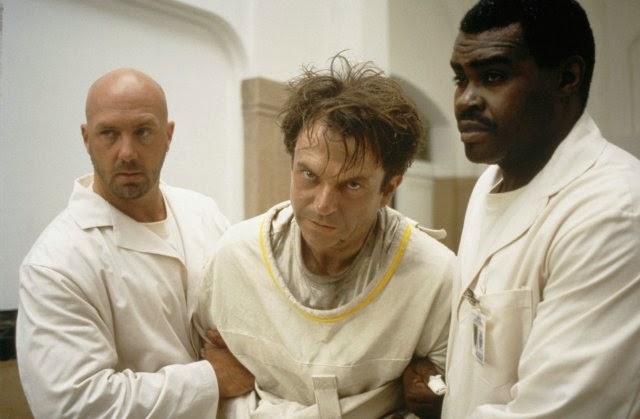 4. In the Mouth of Madness (1995, dir. John Carpenter) The last great movie from John Carpenter is an H.P. Lovecraft-inspired nightmare about an insurance investigator (Sam Neill) hired to look into Sutter Cane, a horror author whose books appear to be driving people insane. The movie finds Carpenter working in a different kind of subgenre of horror, but one which he slips into with ease. Like New Nightmare, it predates the self-reflexive horror that Scream would popularize just a year later, though it's far less interested in playing those kinds of games. Carpenter works overtime to make the movie as relentlessly scary as possible -- his most oppressive and nightmarish since The Thing in 1982. This was actually written by Mike De Luca, who would become President of Production at New Line during its best years. 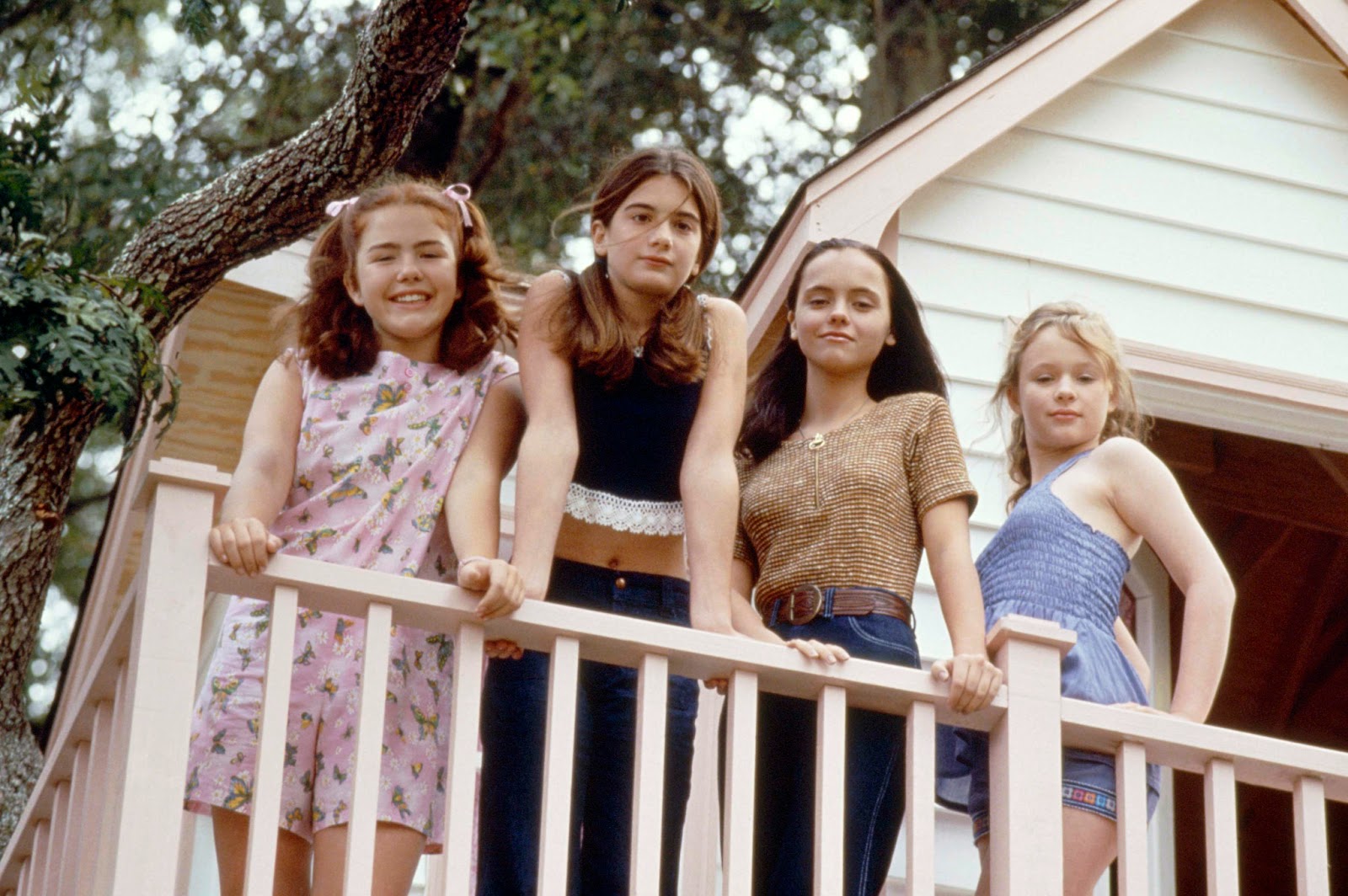 5. Now and Then (1995, dir. Lesli Linka Glatter) Ok, this one's a stretch. Any regular listener of our podcast has probably heard me made fun of for liking this movie, a more kid-friendly (and gender-swapped) version of Stand by Me. Sure, it's full of cliches and terrible adult star wraparounds (the "Now" sections, starring Rosie O'Donnell, Demi Moore, Melanie Griffith; only Rita Wilson avoids phoning it in) and distracting guest stars and songs that, while great, are included just to tell you the time period in which the movie is set. But the four kid performances are so good and director Glatter stages several scenes of such poignancy and nostalgia that the movie ultimately works. Sure, it's kid stuff. But it's good kid stuff. 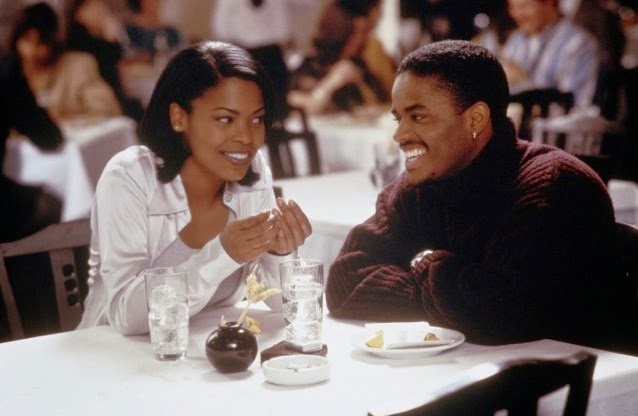 6. Love Jones (1997, dir. Theodore Witcher) New Line built its success as a studio willing to put out movies that other studios weren't touching -- science fiction, horror and, in the '90s, the "urban" movie detailing the black experience and targeted at black audiences: Hangin' with the Homeboys, Talkin' Dirty After Dark, Menace II Society, Set it Off, B*A*P*S, The Players Club -- the list goes on. Some, like the House Party series and (especially) Friday and its sequels, became huge hits for the studio. Some, like Love Jones, fell through the cracks. One of the best and least-seen of the studio's "urban" movies, Love Jones is a terrific romantic drama starring Lawrenz Tate as a poet and Nia Long as a photographer who fall in love in Chicago. The use of the city is good, the two leads have never been more likable and the movie has something to say about the black experience that doesn't have anything to do with gangs, drugs or violence -- a rarity in the '90s. 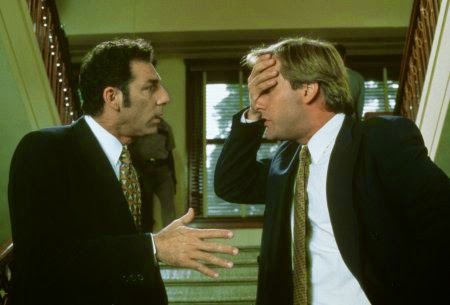 7. Trial and Error (1997, dir. Jonathan Lynn) Another movie that's far from a classic but also light years better than the shitty TV-star-vehicle everyone dismissed it as being. It has a dopey premise -- uptight lawyer and his goofball actor friend switch places! -- and an even dopier title. It has Michael Richards falling down and acting goofy. But it also has a genuinely sweet love story between Jeff Daniels and Charlize Theron in one of her earliest performances, plus deft comic direction from Jonathan Lynn. It's the kind of mid-range comedy that's not really made anymore (and certainly not released to theaters if it is) but which offers 90 minutes of pleasantness and a few genuine laughs. It deserves better than it got. 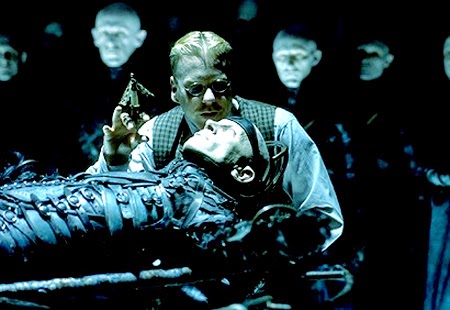 8. Dark City (1998, dir. Alex Proyas) On our recent Dark City podcast, I questioned whether or not this sci-fi noir is actually underrated, seeing as it has developed such a large and devoted fanbase. Among genre fans, it probably isn't. But to the world at large, Dark City remains an overlooked movie and one that deserves to be rediscovered (though the likelihood of that happening is low, seeing as The Matrix covered a lot of the same ground in a more pop-accessible way). A few troublesome performances aside, the film is a triumph of production design, art direction, special effects and, best of all, a twisty script that earns its surprises. If you still aren't convinced of the movie's greatness, check out Roger Ebert's commentary on the DVD and/or Blu-ray. He'll convince you. 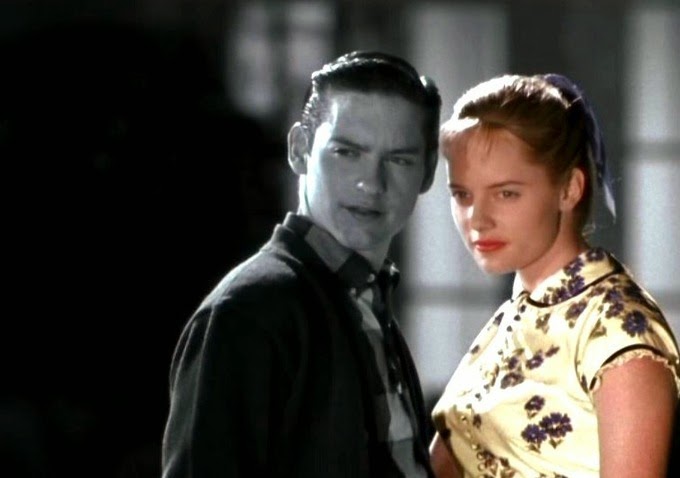 9. Pleasantville (1998, dir. Gary Ross) Writer/director Gary Ross's film didn't make much of a splash when it was released back in 1998, probably because mainstream audiences weren't all that interested in a sociological fantasy that trafficked mostly in 1950s pop culture and was in black and white for at least half of its running time. It has lived on, however, in countless reruns on basic cable and has finally found something of a well-deserved fanbase. Tobey Maguire and Reese Witherspoon are magically transported into a fictional '50s sitcom and proceed to shake things up, slowly turning the black-and-white world into color as the characters have their minds opened. I recognize that some of my affection for the movie is because it taps into my love of 1950s pop culture and the manufactured idea of innocence that we've all silently agreed upon in the decades since. But Pleasantville is also a beautiful movie, one that's clever and original and entertaining while still managing to have ideas and be about something. Things didn't always used to be better. Yes, things have changed in the last five decades, in many ways for the worse. In many ways, though, it's been for the better, and Pleasantville is actually willing to say it. I love this movie. 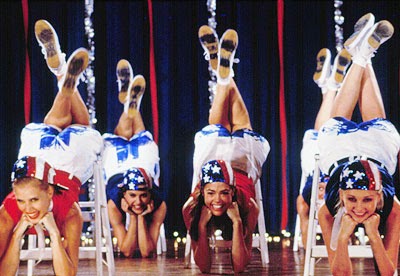 10. Drop Dead Gorgeous (1999, dir. Michael Patrick Jann) New Line ended the '90s at its peak, combining highbrow auteur fare like The Sweet Hereafter and Magnolia with its usual slate of entertaining genre movies like this one, a crazy black comedy/mockumentary about a beauty pageant being held in a small Minnesota town. The cast includes Kirsten Dunst, Denise Richards, Ellen Barkin, Allison Janney, Brittany Murphy, Amanda Detmer, Kirstie Alley and Amy Adams several years before she became the most in-demand actress in Hollywood. Totally ignored upon release, the movie has gone on to develop a sizable cult following, who rightfully grew to appreciate just how dark and funny a movie it is. This is the only feature directed by Michael Patrick Jann, a member of MTV's The State. The unmistakable voice of his fellow State cast member, the ubiquitous Tom Lennon, can be heard as the off-camera interviewer.
Posted by Patrick Bromley at 12:00 PM