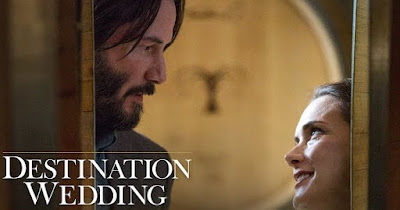 Winona and Keanu are the couple of the year.

I'm happy to live in a world in which Destination Wedding exists. The romantic comedy, which reunites Winona Ryder and Keanu Reeves on screen for the third time in 25 years (following Bram Stoker's Dracula and A Scanner Darkly), succeeds or fails purely on the chemistry and charisma of its two leads, who are the only actors with speaking roles in the entire film. If you're not a fan of one or both of the actors, I'm not sure what you're going to get out of this movie.

Destination Wedding, aka A Narcissist Can't Die Because The Entire World Would End, introduces us to Lindsay and Frank, both attending a wedding they don't want to attend in Paso Robles, California. He's the estranged brother of the groom, she the ex-girlfriend jilted practically at the altar. With no one else to talk to all weekend, the two begin to bond in their shared misery and a kind of friendship forms -- not that either of them would ever be willing to admit it. 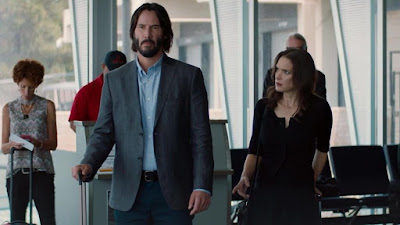 Writer/director Victor Levin's structure for Destination Wedding is quite interesting, as he pieces the movie together almost like a series of one-act plays. The dialogue is incredibly florid and stylized -- these people speak the way no one actually speaks -- each time built around a single situation or incident: meeting at the airport, sharing a cab, the rehearsal dinner, an encounter with a cougar (or is it a bobcat?), etc. Each exchange reveals new depths to both characters as well as advances their relationship in some small (or sometimes big) way. The result is a movie that could easily be dismissed as "just two people talking," but which reveals itself as a romantic comedy about two people who would hate being in a romantic comedy learning to let go of their cynicism, even just a little. It's not the anti-romantic comedy, as it will no doubt be called. Yes, the characters are anti-romance, but the film itself still follows traditional romantic comedy beats. It's sly in the way it works through them.

I have spent my entire life beating the drum for Keanu Reeves, an actor I have adored since he first came to my attention in Bill & Ted's Excellent Adventure and River's Edge. I have certainly seen him miscast, but I have never conceded to the prevailing wisdom that he is a "bad actor" because he was out of his depth in Dracula. He has always been one of my favorite actors, actually, and it has been rewarding in recent years to watch the tide of public opinion turn and see so many others embrace Keanu not just as a movie star -- the John Wick movies have a lot to do with it -- but just as a decent, likable human being. He's a guy who has always done what he wants, whether it's going up to Canada to play Hamlet or taking a break from movies to go on tour with his band Dogstar (saw them twice live) or take everything he learned about martial arts and fight choreography from his work on the Matrix trilogy and make his directorial debut with a cool little film, Man of Tai Chi. He has done comedy before, particularly early in his career (not just Bill & Ted, but also Parenthood, I Love You to Death, and The Night Before) when a certain airheaded sweetness was his stock in trade. "Adult" Keanu hasn't really done comedy, but Destination Wedding proves he's still got the chops. He does well by the mouths full of dialogue the screenplay gives him, but it's the timing in some of his reactions that made me laugh the most. 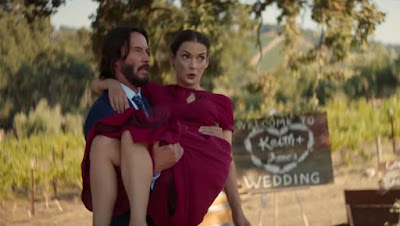 It helps that he's acting opposite Winona Ryder, who, unlike Reeves, has always been well-respected as an actor but dismissed as a human being after she was caught shoplifting years ago. She spent a number of years in career jail while Mel Gibson can still get Oscar nominations for Best Director. Like Keanu, though, she has experienced something of a renaissance recently thanks to Stranger Things, and it's way overdue. She spars well with Keanu, softening the gruffness with which he plays Frank and allowing us to like him because she likes him. She's as neurotic as he is acerbic, but at a certain point both characters begin to let on that they see through each other. They're kindred spirits, happy to call the other out on his or her bullshit while still challenging the ideas that have protected them all these years. The characters are exaggerated, the dialogue self-consciously written, but there's a beating heart beneath Destination Wedding that makes all the sourness taste just a little sweet. A little sweet is all we need. 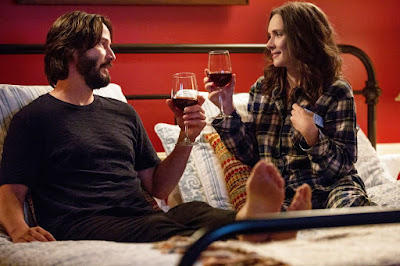 I'll gladly admit that a big reason I liked the movie so much is because I enjoyed seeing Keanu Reeves and Winona Ryder share the screen together for 90 minutes. I'd be more than happy to see them become my generation's Tom Hanks and Meg Ryan (Hepburn and Tracy is a bridge too far), teaming up for a few more projects as long as they all end with the two of them in love. This is not negotiable. With its terrible marketing (holy shit that poster) and quiet VOD release, I was worried that Destination Wedding was going to be another one of those movies I was super excited for because it sounds so good on paper, only to watch it completely blow the execution. My concerns were unfounded. The movie is a delight.

Now who do I talk to about getting these two to fall in love in real life?