Recently, during my oxteenth viewing of perennial Christmas favorite Die Hard, I realized that I had never in my life actually seen a Roy Rogers movie.

Roy Rogers appeared in more than 100 films and television shows in a career that spanned more than 50 years. How could I have spent my 56 years on this movie-filled planet ignoring his work? Well, it’s time to correct that. Kino Lorber recently performed a 4K transfer of a late period Roy Rogers vehicle filmed in a color process called Trucolor, which was invented to compete with Technicolor. This seemed right up my proverbial Western alley.

Did Western towns even have alleys? 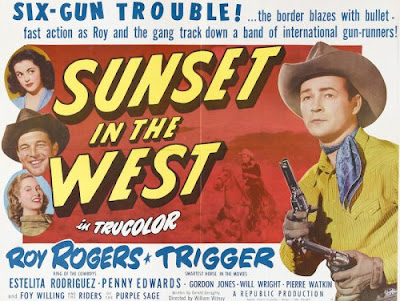 The Plot in Brief: Sheriff Tad Osborne (Will Wright) and his deputies discover the aftermath of a violent train hijacking that leaves several men dead. A gang of outlaws has been using the trains to transport stolen guns across the Mexican border. Singing cowboy Roy Rogers (Roy Rogers) finds this an inconvenience, as he uses those trains to legally transport his cattle to market. Rogers and former deputy-turned-barber Splinters (Gordon Jones) decide to help the Sheriff bring these bad men to justice. Along the way, Roy Rogers gets kidnapped by the bad guys and sings a few songs with the vocal group Riders of the Purple Sage.

We can debate the artistic merits of the Roy Rogers Westerns all night and day. I know two things: they have become iconic pieces of Americana and they deliver. These films contain enough fancy roping, fearless riding, courageous fighting, and sweet singing for any three other B Westerns. Roy Rogers may seem a bit bland, but that’s not a problem when you consider that he was essentially a placeholder for millions of young boys watching his films at Saturday matinees. Rogers wisely gave the kiddies just enough characterization to let their own imaginations fill in the rest. For them, he was playing the part of an action figure, writ twenty feet tall on America’s movie screens. Towards the end of his career, a cynical Roy Rogers would often remark that he was the world’s highest paid babysitter, allowing a nation of mothers to drop their children off at the movie house on the weekend so they could get some errands done. 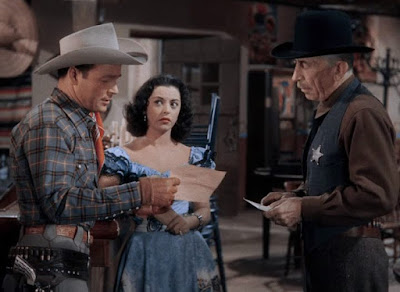 The transfer on the Kino Lorber disc is astonishing. This is a low-budget Republic Pictures quickie made right before television put productions like these out of business, but the image is so crisp and dimensional it often resembles 3-D. I was unfamiliar with the Trucolor process used to film Sunset in the West, but it certainly seems ideal for 21st century 4K Blu-ray transfers. Much like the two-strip Technicolor that preceeded it, Trucolor seems to favor orange and blue tones over other colors in the spectrum; but for all I know, that might have more to do with the film’s costume design and art direction. I have watched thousands of movies on home video. I would place this transfer in “My Personal Top Ten.”

Like the movie itself, Toby Roan’s commentary is cram-jammed with goodness, providing a private tutorial on this specific sub-genre in only 67 minutes. Because I was unfamiliar with Roy Rogers and his career, I really appreciated his knowlegable, amiable little talk.

AN ANNOYING AUTOBIOGRAPHICAL PAUSE: Shortly after my wife and I were married, we found ourselves at “Yesterday,” a junk and knick-knack shop a block or two from Wrigley Field. We were movie lovers looking to decorate our new house on a budget, and we found the one-sheet poster for 1954 B-Western Phantom Stallion that was to our liking and in our price range. I think we paid ten bucks for it. We had it framed, and it has hung in our house for the last 30 years. Gerald Geraghty wrote Phantom Stallion; he wrote Sunset in the West too! Everything, and I mean everything, in the world of film is somehow connected. 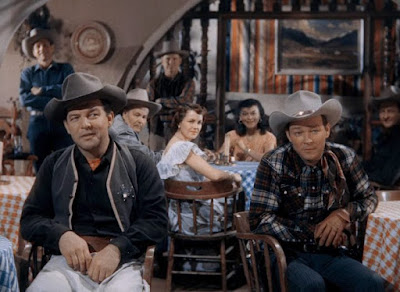 Now, about Will Wright: he plays the Sheriff here, as he did in countless other Westerns during his thirty-year career. He also performed the voice of Friend Owl in Bambi, Mobley in the film noir classic They Live By Night, Dolph Pillsbury in All The King’s Men (the 1949 version), Judge Marcasson in Adam’s Rib, Art Kleiner in The Wild One, Ephraim Lapham in Johnny Tremaine, Dr. Pearsall in Cape Fear, and my personal favorite, a Bible salesman in Inherit the Wind. Like many of his roles in movies and television, that last appearance went uncredited. I have a warm place in my heart for all the endearing character actors who add so much to each film and television show, but never get the proper credit (or sometimes, any credit) they deserve.

TANGENT: Will Wright reminds me of Ward Bond, an incredible character actor and a favorite of both John Ford and Frank Capra, who appeared in more films on AFI‘s famous “100 Greatest Films” list than any other actor: Gone With the Wind, It’s A Wonderful Life, The Grapes of Wrath, The Maltese Falcon, It Happened One Night, Bringing Up Baby, and The Searchers. Bond made 24 films in 1934 alone. Wow.

For anyone into Westerns, musicals, or Americana, I think Sunset in the West is well worth your time. True, it’s tonally all over the map—we start with dead bodies, but we also get singing and comic relief and fistfights—but that also means there’s a little something for everyone. It would be fun to watch this with a kid who likes horses and cowboys. It might lead to an interesting family discussion about what kids’ entertainment was like in the 1950s, versus what it’s like today. Or it may just be 67 minutes on the couch with a bowl of popcorn, a beautifully restored film, and an American icon: Trigger, the smartest horse in the movies. 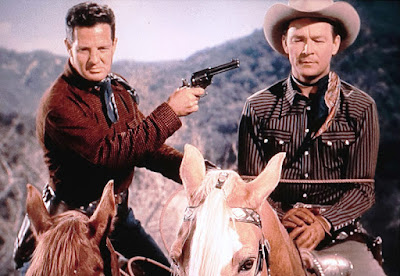 THRILLS: 100%
(Thrilling to see one of the best Blu-ray transfers EVER.)

CHILLS: 50%
(A little scary that one could live one’s life ignoring these delightful little movies.)

SPILLS: 100%
(Director William Witney downplays the romance and music and supplies wall-to-wall action. You know… for kids! Or the cowboy-loving kid in all of us.)