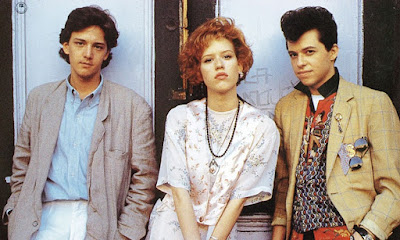 All the movies of the rainbow!


I haven't done one of these hypothetical 24-hour movie marathons in a while (well, a few months), but with #ScaryMovieMonth approaching, my mind is certainly racing with possibilities of themed horror movie marathons. As a warm-up, let's watch a bunch of movies with colors in the title, a theme suggested by our own Alejandra Gonzalez. Thanks, Ale! 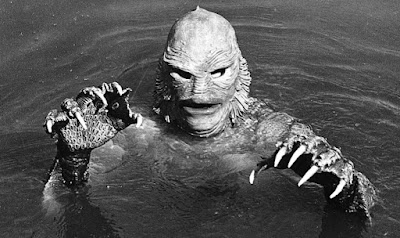 Even though Universal botched the Blu-ray, reading JB's piece on Revenge of the Creature has me wanting to revisit everyone's favorite gill man. Let's start there. I like starting with classics; they play well in the morning. Also there's something funny about starting a color-themed movie marathon with a black and white title. 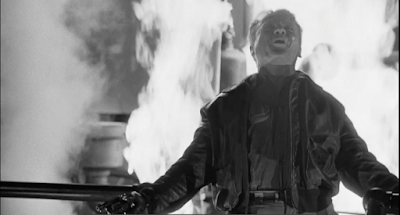 I've never seen this Jimmy Cagney gangster classic, so let's use this marathon as an excuse to close that gap. The Warner Bros. gangster movies of this period are kind of blind spot for me overall, actually. It makes sense to start with one of the most famous ones. Well, not start, really, but wade back into those waters. 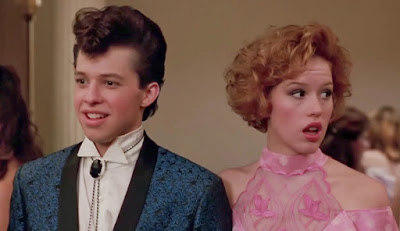 In the interest of keeping things pretty light during the day, let's jump ahead to a John Hughes-scripted romance that's pretty gross when it comes to class (a recurring theme across Hughes' work) but which I can't divorce from my nostalgia for the performances and the music. Jon Cryer's Duckie is the poster child for Friend Zoned m'lady types, but that bad taste is washed away by the greatness that is Annie Potts and especially James Spader as the quintessential rich asshole. It may not be the best James Spader, but it's for sure the most James Spader he's ever been. I will never not be completely pulled out of the movie by Andrew McCarthy's reshoot wig in what should a transcendent, romantic moment. The wig, coupled with the way he bugs his eyes and says "I love you" like a serial killer, makes it seem like there's something really wrong with him. Like, he's sick or something. Good thing the constant repetition of OMD's "If You Leave" makes up for all of it. 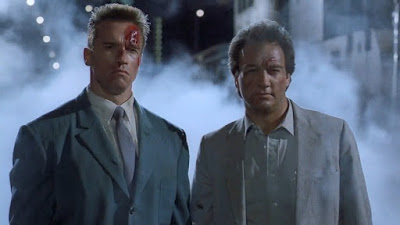 I wanted a big dumb action movie as a change of pace, and it was down to choosing between this and Red Scorpion. I love Joseph Zito and all, but Red Scorpion sags pretty hard in the middle (during what Adam Thas refers to as Dolph Lundgren's "vision quest"). Red Heat, on the other hand, is a buddy cop movie directed by Walter Hill and starring Arnold Schwarzenegger. I could watch any of those three things separately all day, so putting them all in the same movie makes it an easy pick. Jim Belushi is aggressively not terrible, Arnold is awesome, Chicago is prominently featured, the supporting cast of then-character actors is amazing (Laurence Fishburne! Gina Gershon! Ed O'Ross! Brion James! Peter Boyle!), and Walter Hill can direct circles out of this type of movie. Shit, now I want to watch Red Heat immediately. 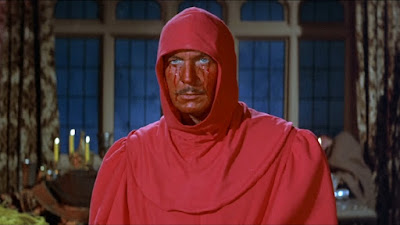 I first saw this at the first 24-hour Music Box Massacre I ever attended. Joe Dante was a guest and brought his personal print of the movie, which was pristine and looked gorgeous thanks to Nicolas Roeg's photography. I completely flipped for the movie, which sent me down the Corman/Poe rabbit hole from which I have never come back up. They are a staple of my October viewing. The only reason I'm placing it here is because it played around this time for that screening and I'm clearly trying to recapture a happier time. 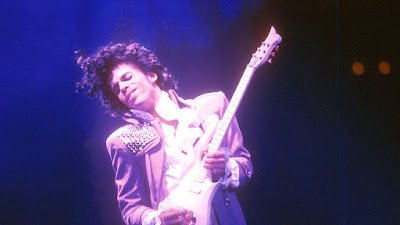 I thought long and hard about flipping this with the movie that I've programmed next, but I think that one plays better a little later and we may not want to be watching it while we eat our pizza. Purple Rain, on the other hand, is an excellent pizza movie and a perfect encapsulation of what made Prince great captured on film the way A Hard Day's Night does for The Beatles. 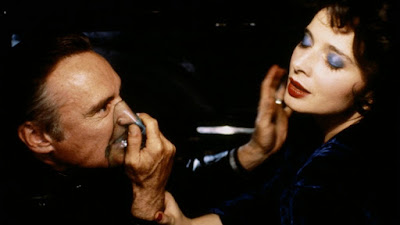 The fulcrum of the entire marathon is one of the best movies of the 1980s and one I'm always happy to revisit. Blue Velvet is too dark and too weird to be enjoyed over pizza -- each detracts from the other -- so it's being slotted in a little bit later than the usual primetime feature I schedule for these marathons. As with the films of Dario Argento, my favorite David Lynch movie is constantly shifting around between the same three titles depending on which one I'm watching or the day of the week you ask me. This is one of those three. Whoever comes over to join me for this one is going to have to stop at the store on the way over and pick up some Pabst Blue Ribbon, making this the only time in my life I'm willing to drink it and not feel like a hipster douche. 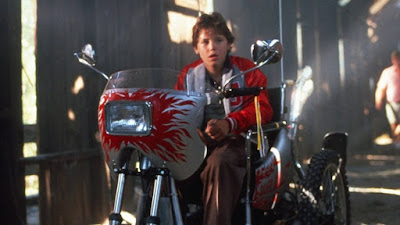 I've spent all my years on this site professing my love for this Stephen King werewolf movie, and it seems like the tide of public opinion has finally started to turn. I don't know if that's because people are finally starting to feel about it the way that I do or if just enough time has passed that every single horror movie released in the '80s is now seen as a classic. Either way, I don't care. This will make a good transition movie into the overnight section our marathon, when things start to get really crazy. 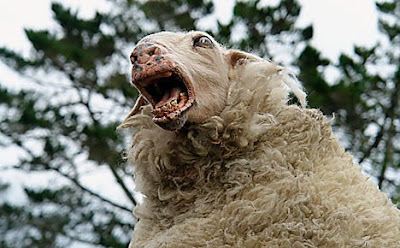 You wanna get nuts? Let's get nuts. This New Zealand import has it all: killer sheep, mutant sheep people, laughs, gore, charming accents. It's the type of movie made for the midnight slot, when we're starting to burn out and get really tire after watching movies for more than 12 hours. Plus, I haven't seen it since I saw it, so I'm happy to revisit it and see if it's as fun as I remember it being. 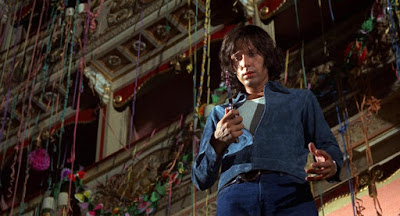 You have no idea how much restraint it took for me to not put Deep Red in the traditional 2 a.m. Italian horror spot. But because I've seen that a bunch of times and have only seen Four Flies once, it seems like the better choice. Argento's third movie is one of his least talked about efforts from his Golden Age; I wonder if it's because there isn't a very good Blu-ray, especially not in North America. My memory is that it has one of the craziest last scenes/shots of any movie ever, and 2 a.m. is the best possible time to find out. 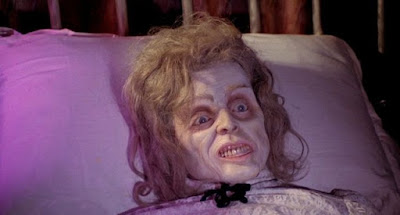 If I was programming Mario Bava earlier in the marathon, it would have been his other "Black" movie, Black Sunday. But I like Black Sabbath better in this slot. It may be because I remember leaving a Music Box Massacre around 4 a.m. once (this was before I began sacrificing my body at the altar of the podcast and staying for the whole thing), and as I walked up the aisle with JB, I could see and hear Boris Karloff on screen addressing the audience as part of the wraparound. I have weirdly fond memory of that moment. We'll go with the original Italian cut of the movie, too, so that we can build our way towards "A Drop of Water," one of the best horror anthology segments of all time. 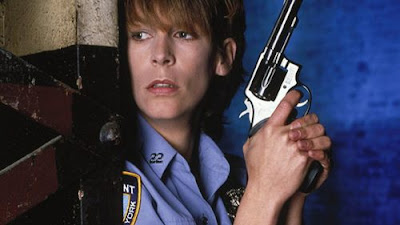 The world is coming back to us and reality is setting in. There's no better guide back into the real world than Jamie Lee Curtis' rookie cop in Kathryn Bigelow's underrated action thriller Blue Steel, the second of three "blue" movies in our marathon. I don't know why there isn't a Blu-ray of this one yet. With all the heat Jamie Lee Curtis has from the upcoming Halloween, it seems like the perfect time for some company with a history of licensing MGM titles get it out there. I'm looking at you, Shout! Select. 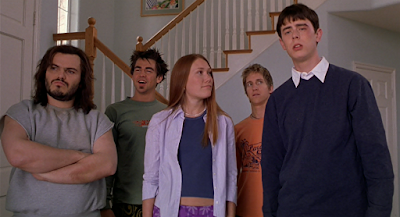 Listen. This movie is just ok. Part of my disappointment back when I saw it was probably because it was Jake Kasdan's follow-up to Zero Effect, one of my favorite movies of the 1990s. But it's also just slight, telling the story of Colin Hanks trying to get accepted to Stanford and facing a series of wacky obstacles. Jack Black has a supporting role, and this was right around the time he was starting to blow up. In fact, every new actor who shows up in the movie is someone overqualified for their roles, including Schuyler Fisk (daughter of Sissy Spacek and Jack Fisk), playing "the girlfriend" because this was that brief window when she was getting big parts in stuff (see also: Snow Day). Thankfully, the movie is super light and only 80 minutes long, both great qualities at this late stage in our marathon. Plus, it gets us an "orange" movie without any ultraviolence! 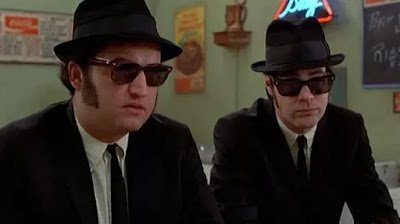 Let's end big, and by "big" I mean an epic, two and a half hour musical complete with car chases and Nazis and a Steven Spielberg cameo. It's funny how I totally didn't "get" The Blues Brothers, the third and final "blue" movie of our marathon, when I first saw it as a young teenager. I think it's because I was watching in the context of it being a "Saturday Night Live movie," and it wasn't until I revisited it a few years later that I was able to appreciate the move on its own terms. I didn't rewatch the movie after the passing of Aretha Franklin, so programming it in our color marathon serves the dual purpose of celebrating Ms. Franklin and closing out our 24 hours on a high note. Get it? Note. Because it's a musical. Cut me some slack. I've been up for 24 hours.
Posted by Patrick Bromley at 12:00 PM