WARNING: The greatest thing about Universal’s new Creature Legacy set is that consumers who buy it will be made to feel as mistreated as the Creature!

Both the Nerdweb and the Monster Kids Network lit up last week when the new Universal Blu-ray set, Creature From the Black Lagoon Complete Legacy Collection, was finally released and arrived in the hands of eager fans. I know; I was one who counted this release as one of my most anticipated of the year. “Hey,” we all giggled on message boards and social media, “we will finally have Revenge of the Creature in 3-D and finally have The Creature Walks Among Us in widescreen! What a wonderful time to be alive! Nothing could possibly go wrong. Life is good.”

…oh for those innocent days.

The Plot in Brief: It turns out that the Creature from the Black Lagoon wasn’t actually killed at the end of that movie. Another expedition cruising the black lagoon easily catches the Gill-man and ships him to Marine-land Park in Florida. If the kiddies like watching performing dolphins, they’ll flip over being terrorized by a seven-foot tall monster fish! Scientist Clete Ferguson (John Agar) and lady scientist Helen Dobson (Lori Nelson) try to study the creature but end up studying each other. They fall in love.

The Creature is understandably upset by this because he too has fallen in love with Miss Dobson. An uneasy love triangle is formed. Ferguson quickly gains the upper hand as he wields a giant cattle prod and zaps the monster at every conceivable opportunity. The Creature waits for Clete and Helen to go on a date, escapes his watery enclosure, runs amok at the fun park, and tracks the romantic pair to (ironically) a seafood restaurant. What could possibly happen next?

By the way, “Amok at the Fun Park” will be the title of my autobiography. 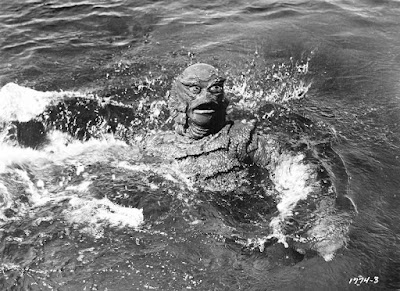 And so the masses thrilled at the THWACK of those distinctive Amazon parcels hitting doorsteps... but within hours, trouble arrived like an extra powerful dose of Rotenone in the Black Lagoon, killing both the fish and our expectations. Hundreds of Creature fans opened the set and then ran, not walked, to their video systems to finally watch Revenge of the Creature in 3-D. They were first met with an unusual onscreen warning, reminding them to check their equipment if something looked…fishy… and giving them the chance to bail and watch the film in plain old 2-D.

The intrepid fans pressed on (well, actually, they pressed “play”) and were greeted by a strange split screen consisting of the left eye image and the right eye image displayed side-by side. WTF? This had never happened before. Like me, hundreds of Monster Kids took to the internet! By the time I hit my laptop, Home Theatre Forum and Blu-ray.com were already abuzz with news of the strange anomaly. It turns out that 3-D capable televisions actually have several ways of interpreting a 3-D signal; our televisions just always happened to default to the correct one EVERY SINGLE OTHER GODDAMN TIME WE HAD EVER WATCHED A GODDAMN FILM IN 3-D. By switching your viewing preference to “Side-By-Side,” you could watch Revenge in compromised, down-scaled 420p 3-D, which several HTF members were quick to point out doesn’t even meet the technical standards for Blu-ray 3-D. 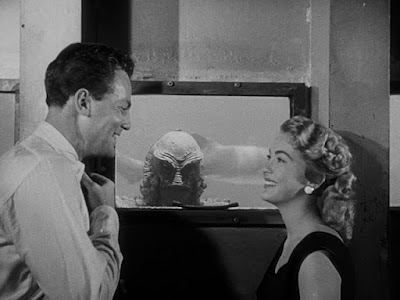 Many were quick to exclaim that it must be a mistake; Universal would surely fix things once the company learned of this egregious error. Ron Furmanek of the 3-D Film Archive said the 3-D restoration he supervised was beautiful and pristine and what was on the new Universal disc did not do it justice. Others were just as quick to suggest that Universal had done this deliberately to save disc space; cramming the 2-D Revenge, 3-D Revenge, and 2-D The Creature Walks Among Us onto a single disc would lower their per unit cost by a few clams. (The first disc in the set is the exact same one that was previously released when Creature From the Black Lagoon made its Blu-ray debut.) Many said there would be no “make good” from Universal because technically, Universal could claim that it delivered what was promised.

It has been a long Labor Day Weekend, and so far no word from Universal.

Of course, I am upset. I was looking forward to this, paid good money for it, and received a Blu-ray “collection” consisting of one disc I already owned and a second disc with a compromised version of what was, for me and many others, the main attraction. 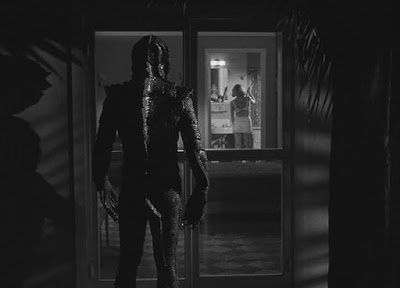 I realize that, technically, Universal doesn’t owe me anything, but in a way they do… at least morally. As I never tire of pointing out, Universal Studios owes the classic monsters a debt they can never repay. If it were not for the release of Dracula and Frankenstein in 1931, Universal would have gone bankrupt. There would be no Universal Studios without the classic monsters. Universal has never been shy about monetizing its intellectual property, and I do not hold this against them. How many toys, costumes, collectables, greeting cards, drinking glasses, banks, action figures, Halloween decorations, product promotions, assorted tchotchkes, and video releases has Universal licensed over the last 80 years? Gadzooks! I myself have purchased the classic Universal monster films on VHS, improved VHS, laserdisc, DVD, Anniversary Edition DVD, Blu-ray disc, and Legacy Collection Blu-ray disc. I have supported Universal Studios in every one of these classic monster endeavors, and now I would like them to support Classic Monsters fans and do the right thing by re-pressing the second disc in proper 3-D. Yes, it’s Universal Studio’s intellectual property, but it’s our shared cultural heritage. Imagine if you will that an American corporation MAY NOT BE THE BEST STEWARD of the art and magic through which it derives its very livelihood.

BTW, The Creature Walks Among Us, the third movie in the set, looks fabulous. Stay tuned as we await official word from Universal Studios.

THRILLS: 100%
(Thrilling to anticipate a long-awaited release that seemed design expressly to please true fans of a franchise!)

CHILLS: 100%
(Truly chilling to pop in a disc you’re eager to watch only to be immediately greeted by a warning, asking if you’re SURE you want to watch it… and when you choose “YES,” you’re met by something you’ve never before seen on your screen.)

BITTER PILLS: NEGATIVE 101%
(Monster Kids are hoping that Universal Studios will re-format Revenge of the Creature and send out replacement discs. I don’t think they’re going to lift a fucking finger to correct this situation. PROVE ME WRONG, UNIVERSAL.)

Email ThisBlogThis!Share to TwitterShare to FacebookShare to Pinterest
Labels: 3d movies, creature from the black lagoon, revenge of the creature, the creature walks among us, thrills chills and spills, universal monsters