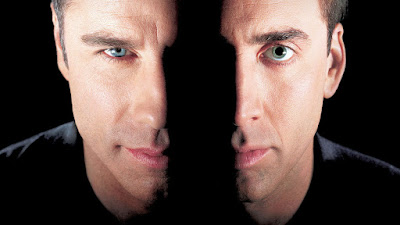 Welcome back to the Mall Movie Time Machine! It’s been awhile (been awhile). I’m taking in some missions this week, going back in time to five mall movie theaters from 1988, 1991, 1994, 1997 and 2000 and deciding what I’ll see when I’m there. Leave your picks (and rationale) in the comments. 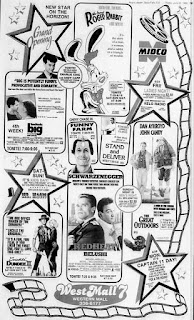 Round 1 (Must cut three)
I can easily cut two: Stand and Deliver and Crocodile Dundee II. I’ve never seen the former and if I haven’t in the past 30 years, I’m not going to waste a time travel on it. I tried watching Crocodile Dundee II in May (for a column I never ended up writing), was really struggling and turned it off. Okay, now for the third cut…Red Heat. It’s a rare Arnold Schwarzenegger movie I haven’t seen, which piques my interest in checking it out, but I know it wouldn’t be my final choice with this lineup, so I might as well cut it now.

Round 2 (Must cut two)
I’ll cut The Great Outdoors despite my nostalgic affection for that movie. It’s hard to pick a comedy when it comes to time travel. It feels like a waste since it plays just as well at home as it probably would in a movie theater. For similar reasons, I’ll cut Funny Farm next, even though I really want to rewatch it. I used to like that movie a lot back in its late '80s cable run.

Final Round
I mean, it’s got to be Who Framed Roger Rabbit, right? I like Big better as a movie, but 6/24/88 would be opening night for Roger Rabbit and it would be neat to see Sioux Falls minds blow at this animated-live action cinematic feat being put on-screen. 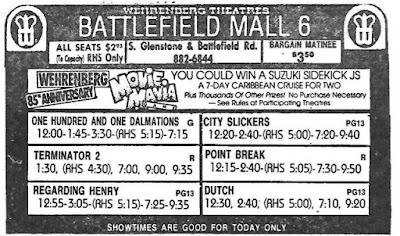 Round 1 (must cut two)
This one is tougher than the first trip, but not in the first round. I’ll for sure cut Dutch first, which is a movie I’ve never liked all that much. Next, it’s probably Regarding Henry, although I find that movie alternately ironically funny and right up my alley in the schmaltz department.

Round 2 (Must cut two)
This one hurts, but I’m cutting one of my all-time favorite comedies next: City Slickers. I just can’t rationalize picking it among these choices despite it subverting my usual no-comedy for time travel rule since it’s also a Western. The next cut is also heartbreaking, since it’s 101 Dalmatians. I really miss when Disney reissued their classics in theaters and it would be fantastic to see this film again (one of my favorites of their animated movies) in 35mm. Dammit.

Final Round
It all comes down to two of my favorite action movies ever. I gotta go Point Break over Terminator 2. I love T2 and seeing it again in its first-run would be a dream, but I watched it in theaters a handful of times in first-run and repertory screenings over the years. I didn’t see Point Break in theaters back in ’91 and the only time I did see it in a theater was a Blu-Ray projected on a movie screen. I can imagine being there for the second weekend of Point Break and just looking at the other moviegoers after it ends in disbelief over how amazing the experience was. 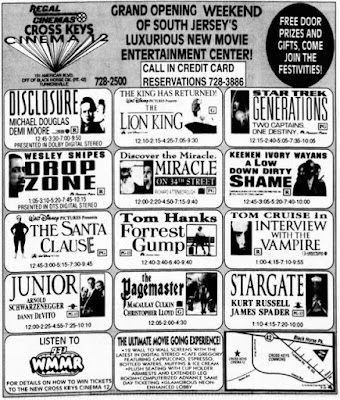 Round 1 (must cut five)
My picks for this trip are going to have people scratching their heads I’m sure. I’ll first cut Junior, because that movie is weird and not all that good. I’ll cut Disclosure next even though it’s hilarious. I don’t think the opening night crowd would appreciate me Max Cady-ing in the theater during every technology scene. I guess I’ll take out The Santa Clause and The Lion King for the next two. I’ve seen both in theaters more than once and at home, too, in the last couple of years. I’m good. Next, I guess Star Trek Generations. It’s hard to turn away Star Trek in a cinema, but Generations isn’t one of my favorites.

Round 2 (must cut five)
This is getting trickier, because I haven’t seen some of these movies ever (Drop Zone, Stargate) or have very foggy memories of them (A Low Down Dirty Shame, Miracle on 34th Street). I guess I’ll cut those four next for that reason, since none of them are must-sees during a time travel trip. I feel bad cutting A Low Down Dirty Shame so early since Andrew Divoff is the film’s main villain, but hey…this was never going to be easy. That leaves me with three left. I’ll cut Forrest Gump next for reasons similar to The Lion King. I saw it a few times in theaters back in ’94 and I’m also worried it’s not going to hold up all that well on revisit.

Final Round
I like Interview with the Vampire; it’s a beautiful looking movie and has improved with age and revisits for me over the years. I never saw it in theaters, either, so it’s tempting to choose it here. On the other hand, The Pagemaster is a movie I have felt sorry for since November 1994 and that hasn’t changed in 2018. Like, this movie never had a chance with its pro-library message. It’s so square. I missed it in theaters and have been fascinated by it ever since. That’s why I’m choosing it for this trip. Plus, when am I ever going to see theatrical Mac ever again? 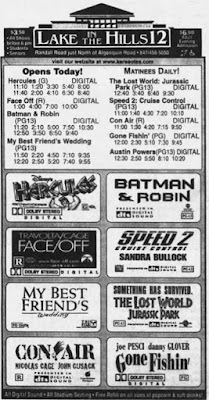 Round 1 (Must cut four)
This is one where it’s easier to find movies to cut than to keep. I’ve never seen Gone Fishin’ (I recently bought it at a used book store) and that’s the way I plan on seeing it: not in theaters. Can you imagine? I’ll cut two awful sequels The Lost World and Speed 2 next. I would be tempted to go for Speed 2 if it was the opening weekend just to see the audience reaction, but this would be its third week of release, so what’s the point? The last cut for this round would be…Hercules. I don’t even know if I’ve seen that movie in its entirety, but that’s mostly because I don’t care.

Round 2 (Must cut three)
I’ll swipe left on Austin Powers next. That thing does not hold up and I couldn’t handle the Lake In The Hills moviegoers acting like they discovered something. Then I’ll cut My Best Friend’s Wedding due to the aforementioned comedy rule. As tempted I am to have the final round be a Cage Match, I don’t like Con Air and never will no matter how many times I try, so that’s got to go.

Final Round
This is the easiest choice ever. I would totally go to opening night of Face/Off over Batman & Robin. B&R is a movie I will watch more than once more before I get old and die because it’s a fascinating mess, but it’s not enough of a nostalgia draw to overtake seeing Travolta & Woo re-team, a crazy Nicolas Cage performance and all those great, long, loud action sequences on the big screen again. Plus, Thomas Jane! 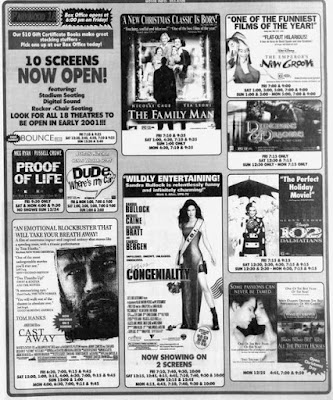 Round 1 (must cut five)
I’ve waited almost 18 years and still never took the dive on All the Pretty Horses, so that’s my first cut. Then, both The Emperor’s New Groove (which I remember kinda blew) and 102 Dalmatians (because who cares? I didn’t like the first live-action film from 1996). Next, I’ll go Proof of Life since it’s such a soggy biscuit of a movie. Just watch the last half hour of that joint and you’re good. The last cut for this round will be Dude, Where’s My Car? since it’s a movie I’ve never dug all that much. I felt like I wasn’t in on the joke and it became frustrating.

Round 2 (must cut three)
I like The Family Man somewhat and Miss Congeniality is funny, but I can’t see myself picking those for my final choice, so I’ll take those out now. Bounce is gone next despite me believing it was fantastic the one time I watched it on DVD. I remember watching all the deleted scenes, too, and thinking there was enough good material for two movies! I take it back: Bounce makes the final round. Sorry, Dungeons & Dragons. I’ve never seen it. I think I might like it. I was pro-Eragon back in the day.

Final Round
The heavyweight bout of Bounce vs. Cast Away. Seems like a no-brainer, right? I adore Cast Away. I think what it comes down to is if I was in a theater for Bounce I would be sad I wasn’t in the auditorium showing Cast Away on opening night. So that’s my winner. Now if you’ll excuse me, I need to time travel back to 2018 to add Bounce to my digital library.

Your turn! Which movies would you choose from these trips and why?
Posted by Patrick Bromley at 12:00 PM