Review: SKELETONS IN THE CLOSET 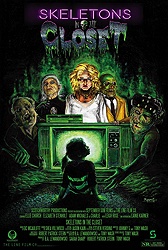 Indie horror gets another '80s throwback.

Skeletons in the Closet, one of the first films from Chicago-based (!) indie distributor Cow Lamp Films, is a horror anthology in the way that Two Evil Eyes is an anthology, presenting two stories that are part Creepshow and part Grindhouse. The former influence gives it the real sense of fun that runs through the film; the latter lends the movie some of the worst tendencies of modern indie horror. The result is a mixed bag that is celebratory of horror in a really fun way but constantly undone by some unfortunate stylistic choices.

Like most anthologies, Skeletons in the Closet has a framing device, though it's more complex and meta than most: it's Friday night, and a babysitter (Elizabeth Stenholt) sits down with a young girl (Alaina Karmer) watching her favorite TV show, Skeletons in the Closet, itself a horror movie showcase hosted by The Widow (indie horror mainstay Ellie Church, always a welcome presence) and her dead husband, a rotting corpse named Charlie (Adam Michaels). The Widow screens a pair of movies: in the first, a girl and her mother go to see grandma (Leigh Rose), who is scary both as strict old lady and as...something else. In the second story, a pair of criminals on the run hide out in a junkyard only to discover they're not alone, and that someone or something called The Dismantler is in there with them.

I found myself really digging the first half of Skeletons in the Closet. Sure, I'm pretty burned out on modern indie horror films that reference the '80s for the sake of pushing our nostalgia buttons, but at least this one frames itself around the horror host showcase series, a staple of the 1980s. It may be a shortcut, but it adds to the sense of Friday Night monster movie fun. The fact that there's a framing device within a framing device --we're watching someone who is watching someone watch a movie, which ends up being the movie we are watching -- is maybe a few levels too deep, but it's a good way into the material. The first story about the scary grandma is fun and creepy, too, particularly when it introduces some gnarly gore and makeup effects. But it's also during this segment that the filmmakers (the film is credited to three directors B.A. Lewandowski, Robert Patrick Stern, and Tony Wash, so I'm not sure who is responsible for which parts of the movie) start fucking with the image, adding in static and stutters and jumps and shakes and cutaways, creating artificial "print damage" (this despite the fact that the movies are being shown on VHS, so some of the damage might make sense but not all of the technical malfunctions). It's an unfortunate way of generating tension, one which has become commonplace particularly among found footage movies, and it pulls me out of the movie every time it happens.

It happens a whole lot in the second segment, "Chop Shop," which eventually becomes almost unwatchable thanks to all of the post-production manipulation meant to give it the "grindhouse" feel. The story itself is less compelling than the first and a lot darker, too, eventually attempting to tie the whole movie together but in a way that hardly satisfies. Plus, rather than leaving both the babysitter and Widow material as a wraparound, the filmmakers continually cut back to them watching the movies, sometimes just commenting on the action, often times just to shots of them looking at screens (there's one DePalma-esque split diopter-style shot of which I'm especially fond, with the young girl's face right up against the camera and the babysitter way in the background still in focus). Like all the print damage stuff, it disrupts any possible tension the movie generates and constantly reminds us that we're removed from the horror by, like, three extra layers.

I'm always pulling for any indie horror movie I'm lucky enough to see, and generally try to stay quiet about the ones that don't work for me. Making movies is hard. Making movies independently is even harder, and smaller genre movies like this one need all the help they can get spreading the word. Though I'm frustrated by a number of the choices the movie makes, I opted to review Skeletons in the Closet because it's a movie about which I'm happy to spread the word. There's enough good stuff in it to demonstrate the talents of everyone involved. More than that, though, is that it gets a kind of spirit right. There's nothing about the movie that really resembles stuff like Night of the Demons or Night of the Creeps, but at its best, it gets that feeling right. That's the stuff I'm going to carry with me. At the very least, Skeletons in the Closet made me remember what it was like to rent a bunch of horror movies on a Friday night and stay up way too late watching them. Some things don't change, I guess.

Skeletons in the Closet has its world premiere at Chicago's Davis Theater tonight and will have more screenings throughout the month.
Posted by Patrick Bromley at 5:00 AM