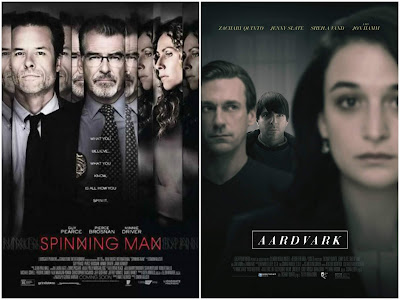 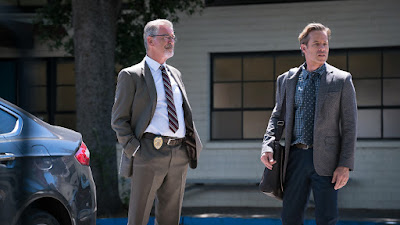 Remember that great sequence in The Silence of the Lambs? Wait, let me narrow it down. It’s the one where we think the FBI hostage rescue team is swarming Buffalo Bill’s house just as the vulnerable novice Clarice Starling arrives at his door. The two lines of action are edited in such a way that we think they’re leading to the same place, but the movie pulls a fast one on us at the last second, revealing that the team and the agent have actually gone to two separate houses. Director Simon Kaijser teases similar narrative trickery in Spinning Man, controlling the audience’s experience by carefully cutting around revealing moments and burying potential truths between long time cuts. Truth and time are important elements in Spinning Man, a glossy whodunnit based the 2004 novel by George Harrar. Neither of them is solid or tangible; Each one is open to interpretation, manipulation, and abuse, lending a cunning edge to a largely unremarkable thriller.

When local high schooler Joyce Bonner (Odeya Rush) goes missing, Dr. Evan Birch (Guy Pearce) becomes the prime suspect for her kidnapping and possible murder. Birch is a cagy, standoffish philosophy professor with a history of unsavory relationships with students. He and his wife Ellen (Minnie Driver) have already fled one small town due to his infidelities, and Detective Robert Malloy (Pierce Brosnan) has a feeling that the supposed family man knows more than he’s letting on. As Malloy pokes holes in his alibi and Ellen digs through his pockets for clues, Birch realizes that his memory might be playing tricks on him. He suddenly remembers seeing Joyce around town, maybe even giving her a ride in his car. He didn’t kill her, but he’s pretty sure he knows why her lip gloss ended in his back seat. Or does he? Is he remembering Anna (Alexandra Shipp), the college student he had an affair with last year? The longer the search for Joyce goes on, the less Birch knows for sure. 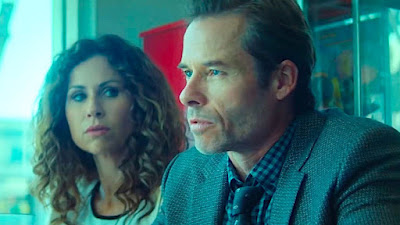 Fans of Memento will find quite a bit of fun in watching Guy Pearce struggle with his recollections, and Redboxing favorite Pierce Brosnan (I.T., The Foreigner) continues to settle into his post-Bond elder statesman career with a certain degree of gravitas, but Spinning Man never rises to the complexities of spiritual siblings like Gone Girl. Less opera, more soap, maybe? It threads together some heavy-sounding philosophy to beef up its prestige bonafides, but its attempts to engage with those themes rarely produces anything interesting enough to justify the talented cast tasked with telling the story. Pearce brings an appropriate leering creepiness a tough part, and Minnie Driver is served a bit better than the usual Concerned Wife Over 35 role, but neither gets to make enough of an impact to keep our attention. Also, is Jamie Kennedy turning into Paul Giamatti? Anyway, Spinning Man is an elegant enough exercise for a Sunday afternoon, but good luck remembering it on Monday. 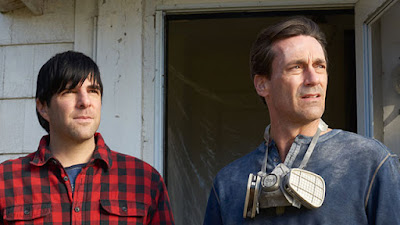 The early 2000s run thick through the veins of Aardvark, a naval-gazing indie dramedy pawing helplessly at the feet of Alexander Payne and Charlie Kaufman. It’s quirky and introverted and savage and charming and, well, really, it’s none of those things, but it would really like to be all of them. Some movies make complex ideas seem easy; they weave poignant themes into relatable stories and pose intricate questions through the actions and reactions of a broad mosaic of characters. Aardvark, on the other hand, makes easy ideas seem insurmountably complex. It assumes we’ll be so captivated by its eccentricities that we’ll forgive its bland, aimless posturing and not bother to protest when none of it leads to any revelations worth revealing. It stands against the wall in an ironic Christmas sweater — borrowed from dad, of course — nursing a beer and hoping we’ll suffer its awkward small talk long enough to find it attractive, but not so long that we realize it’s completely full of shit.

Zachary Quinto is Josh Norman, an undiagnosable outcast sitting down for his first therapy session with Emily Milburton (Jenny Slate). He talks about his new job at the coffee shop, his struggles to regulate his medication, and his brother Craig (Jon Hamm), an actor he describes as one of the premier talents of his generation. Josh is both in awe of his brother and bothered by him, Emily notices, and it probably has a lot to do with the fact that Craig hasn’t been home to visit in more than a decade. Emily is taken with Josh’s self-deprecating humor and fascinating insistence that he sees Craig playing various roles around town — sometimes a black police officer, sometimes an elderly homeless woman. Emily doesn’t believe him, of course, but then Craig himself shows up at her door. He’s home. He’s looking for information on Josh’s sessions. And, well, he’s Jon Hamm Handsome. The two begin an affair while Josh finds a kindred spirit in Hannah (Sheila Vand, A Girl Walks Home Alone at Night).

Like Spinning Man, Aardvark underserves its talented cast at almost every turn. Worse, each of them seems to be fighting for their own separate movie: Slate’s poised and vulnerable Emily is in a romantic comedy that isn’t funny. Quinto’s Josh is Lars without his Real Girl, suffering from a schizophrenic condition that the movie can’t be bothered with exploring in any significant depth. It relies instead on tangible mental illness signifiers we’re all familiar with from other movies: a messy apartment, an autistic attention to detail, bouts of rage. That’s close enough, right? We figure Hamm’s Craig is a selfish asshole, but any potential redemption is muddled by an ambiguous, unreliable narrative style that raises a thousand more questions than it answers. Open ends are totally acceptable in a movie like Aardvark, of course. There’s no reason it should have to hold our hands through each little emotional catharsis. But then, there’d have to be some.
Posted by Patrick Bromley at 12:00 PM