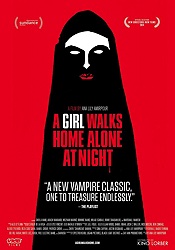 Built from its set in Southern California, Ana Lily Amirpour’s genre-spanning A Girl Walks Home Alone at Night is atmospherically beautiful as it is intelligent. We follow the (sort of) love story of Arash (Arash Marandi) and Girl (Sheila Vand) as they navigate their Iranian ghost town, Bad City. If you’re smart (you definitely are) you can guess that not much good happens in Bad City. Lined with oil rigs and wildly ignored mass graves, Bad City is definitely never going to make it on any of my vacation Pinterest boards. Despite vampire murders swathed in darkness and creepy bone crunching sound effects, the parts of the movie that end up being the most powerful in this Tom Waits-esque horror story are Amirpour’s sensitive take on teenage loneliness and the sad truth of growing up. Her characters are as flawed as they are noble and represent layers of cinema archetypes, all dripping in iconography. 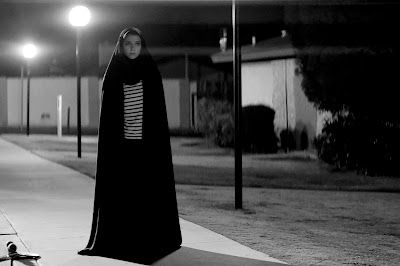 The film is pretty minimal, so to go too far into the plot wouldn’t be doing anyone any favors. So, in super-brief: Arash, a moody, James Dean-type, is a seemingly hard working young man trying to support both himself and his drug-addicted father, Hossein (Marshall Manesh). Tethered to Bad City by both Hossein and a debt-seeking drug dealer, Arash is left in this purgatory to his own devices—restoring a 1950s hot rod and taking care of his cat. At the same time, we have Girl, the neo-noir punk vampire of Bad City. We encounter her first in her lair: a small bedroom stuffed to the gills with pop culture paraphernalia and new wave posters. Our Nosferata’s cave is full of anachronisms and contrasting zeitgeists—making it really hard to discern when and where we are. In the outside world—dawning a chador—she lurks like a shadow, stalking those in her city like a less annoying Batman. Often on a skateboard. Basically, she’s the fucking coolest.

In a movie with so little dialogue, how Amirpour introduces us to her characters is key to understanding their functions. Looking to how the characters are titled (their first name and then whatever role they play, i.e. Atti “The Prostitute”) we can pretty much assume we’re not really invited to get to know them at all on their own. Instead, Amirpour is well aware of the pastiche format she’s playing in. Everything has a claude-glass mirror image—heroine and blood addiction, vampirism and debt collecting, idealized male and female beauty. We understand that things are paired together and cannot exist apart, adding yet another layer of interpretation to the movie. Like silent film, we spend long bouts of time with the construction of each shot and the expressive faces of the main characters. This moodiness cut with contemporary, totally jammable music makes for a satisfying combination and totally eliminates any cheesiness a movie about dark brooding undead teenagers could elicit. 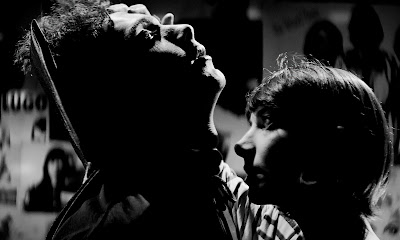 Criticized for being light in plot development, it’s important to note that the movie watches more like a short film drawn out over 99 minutes. It's hard to round out huge character arcs when the movie is so fueled by mood—working more like a cocktail of iconography and archetypes of cinema than a traditionally served up narrative. Sure, it would have been interesting to see where the romance between Arash and Girl went but ultimately, I enjoyed the movie so much because it was so efficient in what it was showing. Also, like, go watch Twilight if you want some human on vampire lovin’. This film lives in the cultural space of vampires and horror but is more concerned with bringing other elements to the table. The layering of genres, for one, and the meticulously crafted world as a whole end up deepening the piece so far beyond the usual rhythm of a movie. Instead of watching this as an arcing story, A Girl Walks Home Alone at Night should be taken as a single comic issue, or even a moving painting. Mood is everything.

Amirpour expertly refines her tool set and manages to build a deeply effective stylized and emotive film that, unlike other lower budget movies, doesn’t spread itself too thinly or try to do too much with too little. Instead, we end up getting glimpses of meticulously crafted characters that serve as symbols and codes we can read into. Overall, the thing that resonates the most is how well loved this script was. Every detail was pored over—so much so that Bad City ends up having a big character role itself. The way the city blankets each scene in this thick, almost unctuous blackness adds a crazy element of intrigue; what we think will be a kiss between two characters becomes a confusing silhouette— throwing back to censorship tricks of old movies meets Eraserhead. 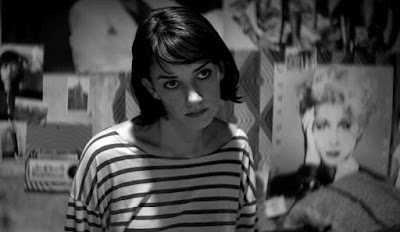 Admittedly, I went into this movie expecting not to like it. After Let the Right One In and Only Lovers Left Alive I figured I’d seen enough vaguely indie reinventions of vampire movies and couldn’t imagine the possibility of anything remotely refreshing being brought to the genre. I wouldn’t say this is my favorite movie of the moment (which is what usually happens when I write about a movie) but I think Amirpour’s crafting deserves some serious praise. The amount of layering in this movie is awesome and it allows itself to be goofy at times and sad at others. If you’re looking for something new, then I suggest you hop over to Netflix and give it a try. After all, how many western/horror-Iranian-(but shot in California)-featuring-a-female-vampire-(maybe)-heroine-who-eats-men-and-scares-little-boys movies are there in the world?