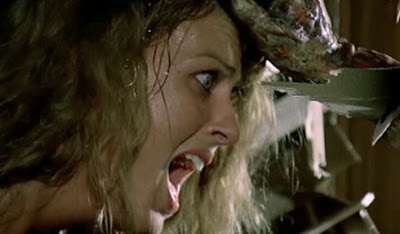 Slimy, squishy, round balls of ever-seeing goop. Sometimes they go splat, pop, and even sploop.

And that friends, is me trying my hand at being Dr Seuss.

Eyeballs are gross in real life; it's as simple as that. Enter some twisted weirdo (usually a genius of sorts) making a film and lo and behold, the destruction of some innocent eyeballs shall ensue.

I don't want to start this off by giving you the wrong impression, though. I wouldn't say I have an aversion to eyeball horror, especially as I am willingly taking on the grossness of the topic. But as far back as I can remember, the most memorable scenes for me in many films tend to be related to some eyeball something or another. For instance, in Total Recall (the original, of course; I have yet to muster up the desire to watch the reboot), when Quaid and Melina are sucked out onto Mars and their eyeballs just about explode out of their faces. I haven't watched the movie in at least a year, yet as I write this I'm making faces at the memory. Some things just stick. Gross buggy eyeballs et al.

With Junesploitation just about upon us, I'm getting prepped for all things "sploitation," starting with my own category of Eyeballsploitation (it's quite difficult to predict when/if a future Junesploitation will have such a category, as Patrick has mentioned his dislike of eyeball horror a few times... unless it has already been a category and my attention to detail is comparable to that of a just plucked eyeball sightlessly resting in the pluckers hand).

The kiss of death has never quite been so literal as it was in 28 Weeks Later. Man leaves wife in frenzied panic. Woman survives and is in fact a carrier with no symptoms. Man and wife reunite and bam, the kiss of death ensures man's demise. After he turns into a zombie killing machine, let's give it the ole thumbs in eyeballs to the wifey and death by bloody squishy holes in head. 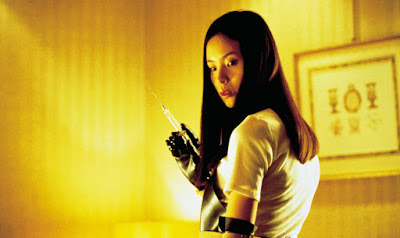 Audition (1999) One of my favourites in this list and the film I was most looking forward to watching. Suffice it to say, long needles inserted into eyes would be enough, but her giggles and the squelching sound, not to mention the "twing" of the flicks she gives them when they have been satisfactorily placed, still has me unnerved.

(I'm completely grossing myself out as I write this and I'm really hoping to somewhat desensitize myself from eyeball horror by re-watching and describing the key scenes that disgust me the most. On we go...)

Oky doky, perhaps let's switch gears and dip into some mild eyeball-y-ness. Stanley Kubrick's A Clockwork Orange is a favourite of mine, primarily due to the amount of scenes that linger for years after you have seen the film. It has been at least four years since my last viewing and I still can vividly remember the “Ludovico Technique” scene with Malcolm McDowall's wide, specula-opened eyes. Apparently during the filming of the scene he was temporarily blinded when one of his corneas was scratched, which for me means next viewing will be even more impactful knowing he suffered for his art. 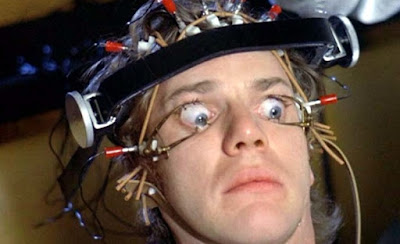 I find that it's not even a direct to eye interaction for it to be disturbing. Take Mission: Impossible III, for instance. There's a micro-explosive implanted in an agent's brain, the defibrillator takes too long (no defibrillator takes 30 seconds to charge, people) and it explodes in her head. Sad. However, those fucking eyes of hers win the scene. They are the worst. THE WORST.

Sometimes when an eyeball comes flying out of your head, it can be funny, though. (Or perhaps my idea of humour is becoming more and more apparent?) Especially when it comes from a zombie head and lands in a dumb girls open screaming mouth. Thank you, Evil Dead 2.

Another not-so-bad eyeball moment? Eyeball soup in Indiana Jones and the Temple of Doom. People had this on their most gross lists. Why? Do the eyeballs blink at all? 'Cause I think eating something that has the capability to blink (or was that a wink?) as I'm carting it toward my mouth to turn it into sustenance, is an immediate no in my food books.

You know that if a character is wearing an eyepatch in a Tarantino film, you will eventually discover its reason for being. Well, Elle's tale of eyeball loss in the Kill Bill duo is as gory and as gruesome as you would expect. Enter the Bride and the showdown between the two women is nothing short of fantastic, ending in the expected (unexpected?) ripping of Elle's remaining eyeball from her face. Now to the ground witchu, so you can be squished between Uma's toes. There are many a reason I don't like walking barefoot; stepping on an earthworm is one that inevitably makes me think of this scene. Slimy squishy blech.

I know that if I were being tortured in Hostel and had an eyeball hanging from it's socket, I would also want it to be removed. By a doctor. In a hospital. While unconscious. But that's probably why I don't have a scene in a horror movie. “This is all well and fine guys, but can we do this under anesthetic?” 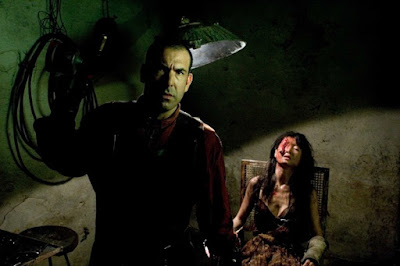 Or instead of spread out fingers, I would “watch” the death by laser eye surgery scene in Final Destination 5 by directing my attention to my phone. Or walking out of the room. But that doesn't count, so sometimes you just have to suck it up and watch the laser eat though an eyeball. And then watch the eyeball after it has rolled from the fallen-from-the-clinic-and-is-now-a-dead-girl's face become one with the pavement after being unceremoniously driven over by a car. Aim for the eyeball drivers. Page 39 in your driver's education booklet.

You know what wins most eyeball scenes though? Over the top, drawn out close-ups.

Zombie Flesh Eaters (aka Zombi 2) does just that. What the fuck. I watched the film specifically for writing about it in here and man did it not disappoint. Peeping tom is a peeping zombie and when you break through a door of COURSE there's bound to be at least one giant splinter of wood at the correct angle. I wanted to somehow form my words into long drawn out sentences to ensure we could all feel the drawn out agony, but there are no words. No words.

Have you seen the movie Anguish (1987)? It's the hypnotic movie within a movie, starring Zelda Rubinstein and featuring plenty (and I mean plenty) of eyeballs. We caught a midnight screening of it a couple years ago, went into it blind (teehee) and came out happy I had seen it, and unsure if I wanted to again. So you should watch it again for me and let me know if I think it is good or not. Hahaha! 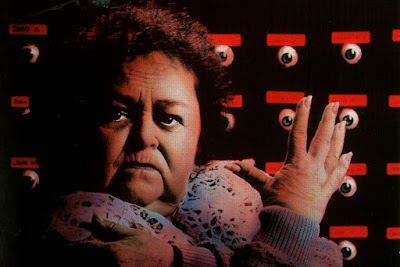 From mutilations, to “bugging out”, to removed from face and squished between toesies, eyeballs have withstood film's test of time and remain at the top of most people's gross out lists particularly when they steal the scene with anything aside from a sideways look.

There's something about the word “eyeball” that's much more satisfying to write and speak than simply writing or speaking “eye.” Screw you, eye; let's allow eyeball to have it's moment in the spotlight... Or maybe I just like saying balls.