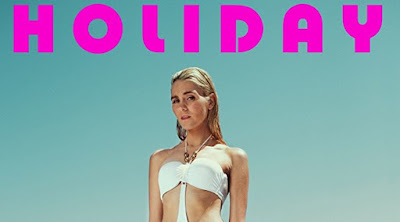 In a 2017 interview with Karyn Kusama about female representation in the horror community, the director of Jennifer’s Body and The Invitation pointed out the obvious to the sadly recurring question of women’s place in the dude-dominated genre: “To me, it’s pretty clear that women’s lives are just as frightening, often loaded with threats all the time (. . .) I feel like we're ideal candidates to be unearthing stories about fear, about human vulnerability, about fighting back, about terror.”

With films like It Follows and Unsane building off an established framework of what constitutes a “horror” film, Danish director Isabella Eklöf’s Holiday will seem like an incongruent entry into the growing catalogue of female-experience driven horror. Eklöf’s debut film might well be categorized a drama or thriller, given its disinterest in suspending reality. Instead, the “horror” in play is precisely the stuff of Kusama’s observation: the vulnerability and terror of being a woman in a woman’s body. No allegories. No symbolic ghosts. Just lived reality, albeit shot in a way that extends the villainous gaze of a serial killer to that of rapists, abusers, and other breeds of entitled men. 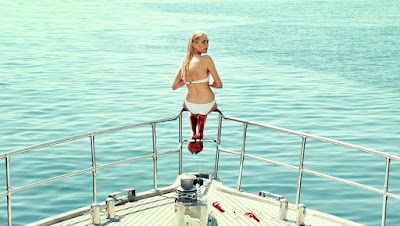 Holiday follows a young woman named Sascha (Victoria Carmen Sonne) on an idyllic holiday at a coastal resort in Turkey with her gangster boyfriend, Michael (Lai Yde), his posse of underlings, and their partners and children. The opening scene is revelatory: Sascha’s credit card is declined at a boutique and back in the hotel room her lover arranges for her prior to their reunion, her affects are scattered messily atop the bed. We get the sense that she has no one to call, no one to turn to, and all her belongings fit in a single bag. On her way to Michael’s beach house with one of his henchman, an ugly moment between the two leaves a taste of what’s in store for Sascha, who easily tolerates abuse in exchange for a sense of belonging and material comfort.

DP Nadim Carlsen beautifully captures the idyllic setting with low-contrast lighting that accentuates the bright, buoyant atmosphere of a tourist town mid-summer, as well as wide, static frames that single out and observe bodies against long stretches of blue water and white walls. Such a picturesque vision provides an effective contrast to the dark narrative and the mounting sense of restriction and containment. When it becomes clear that she’s nothing more than Michael’s arm candy, Sascha wanders off into flirtations with a handsome Dutch vacationer she meets at an ice cream shop. Though a certain leniency is assumed of their lifestyle, Michael is not one to be sexually slighted. Sascha’s actions independent of him are frequently shot as if being watched from a distance, a tension that underscores the tightrope nature of her errant conduct and the danger she courts by rebelling against a man with no scruples.

It’s worth noting as a disclaimer of sorts that Holiday contains an extremely uncomfortable extended rape scene comparable to that in Gaspar Noe’s Irreversible, though in Noe’s version the event takes place in an “unsafe” urban context, and is committed by a stranger -- a formula we (falsely) imagine is where most sexual violence occurs. This scene in Holiday, however, might feel closer to what happens in the safety of homes -- the stuff of secrets and shame pushed back beyond the veil.

With a nuanced approach to the relationship between a young woman and the men who serve as her abusers, easy moral judgments are eschewed in the service of creating a difficult and compelling female protagonist. Holiday impresses in a number of ways, though at the top of the list is the character study it unfolds. Portrayed by a fearless Victoria Carmen Sonne, Sascha is one of the most thrilling characters of 2018, and Eklöf a daring young filmmaker to keep on your radar.

Holiday made its U.S. premiere at this year’s Sundance, and also played at Brooklyn Horror Fest and Fantastic Fest, where it won the Next Wave Awards for Best Picture and Best Director.
Posted by Patrick Bromley at 5:00 AM