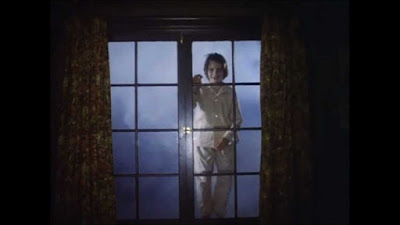 You always remember your first: your first kiss, first love, first heartbreak, and of course, the first time you were ever really scared.

I’m not talking startled by your teddy bear casting a lumpy, monstrous shadow against your bedroom wall for a split second, or the sense of mild panic that came when you were briefly separated from your mom at JC Penney’s. I’m talking real terror: stomach clenching, oh shit there are things out there that mean to do me harm fear, the kind that might be enough to plant the tiniest seed of doubt that your parents will always keep you safe.

For me, it was while watching Tobe Hooper’s TV movie adaptation of Salem’s Lot. Airing in November of 1979, I would have been all of seven years old at the time, just the perfect age for dark things to latch onto your subconscious and never let go. 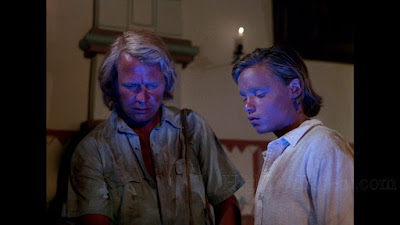 Born in 1972 to hippie parents, I had absolutely no restrictions on what I could watch or read. My parents took me everywhere with them, including to go see Halloween, and for reasons still unknown to me some forty years later, that didn’t impact me the same way little Ralphie Glick hovering outside his brother’s window did. I can only assume it’s because Ralphie was a kid, and though his death wasn’t shown onscreen, I understood enough that he was supposed to be dead, and I had never seen that in a movie before. In a less conscious way, there was also a familiarity to the town of Salem’s Lot. It resembled the run down, working class area I grew up in, where the only thing it had to hold onto was its history. We even had our own version of the Marsten House, where the family living in it was later arrested for animal hoarding and abuse. While I wasn’t entirely sure vampires existed, it was enough for me to know that bad things could happen in my town, and it was enough to keep cause me to lose sleep over the next couple of nights, much to my parents’ and teachers’ chagrin.

The image of Ralphie hovering outside his brother’s bedroom window stuck with me for years. A little touch of Mandela Effect made me remember that he talks, but he doesn’t — that’s actually a similar scene involving a different character later in the movie. Watching it again as an adult, it is, if anything, even creepier because he doesn’t speak; he simply floats and scratches at the window, a horrifying, predatory grin on his face. What’s even more unsettling than that is how easily his brother, Danny, gives in and welcomes him in with a smile. If you have to invite a vampire into your house, you might as well be polite about it, after all. Now, obviously, I’m not the first to mention how effectively chilling this scene is. It inspired scenes in Fright Night and The Lost Boys, and was even parodied in a Simpsons “Treehouse of Horror” episode. But it begs the question: is it merely a fluke standout moment in an otherwise unmemorable '70s TV movie? 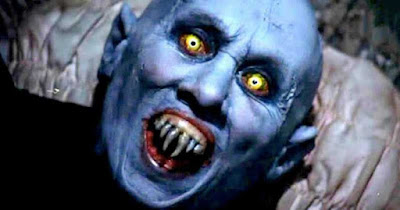 Absolutely not. Salem’s Lot holds up just fine. As a matter of fact, it holds up better than most of Tobe Hooper’s post-Texas Chainsaw theatrical releases, Poltergeist aside. Despite making a few changes from page to screen, most significantly by changing the vampire Barlow from a human to a blue-skinned, Nosferatu-like monster, Hooper remained true to Stephen King’s vision of a town already dying on the vine that’s quickly and brutally put out of its misery by malevolent outside forces. He could have very easily made it so defeating Barlow saves the lives of everyone he’s already attacked, which would have been keeping in '70s TV horror’s tendency to pull its punches at the last minute. Instead, it ends as the novel ends: with the heroes Ben Mears and Mark Petrie victorious over evil, but at the cost of everyone they love.

Though Ralphie Glick just chilling outside his brother’s bedroom window is certainly the most memorable scene in the movie, it’s not necessarily the scariest. That would be in the second half of the miniseries, when groundskeeper Mike Ryerson (played by the late, great character actor Geoffrey Lewis) shows up in the house of kindly senior citizen schoolteacher Matt Burke (Lew Ayres). The scene is a masterwork in using mostly silence to chilling effect – Mike’s voice never raises above a grotesque, otherworldly hiss – not to mention some sort of damn clever practical effect that makes it look like his eyes are glowing. 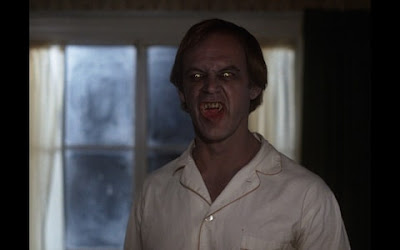 It’s also beat for beat and note for note exactly as it plays out in the book, to the point where you wonder if Tobe Hooper had a copy of it open on his lap while on set. Compare this to the 2004 remake, which takes some considerable liberties with the plot, adding unnecessary drama involving child molestation, blackmail, and a car chase with an evil school bus driver. It seems to suggest that the people of Salem’s Lot are bad, and thus easy pickings for Barlow and Straker, his henchman. Tobe Hooper, on the other hand, with a strange sort of empathy not often seen in horror, got the idea. Really, it’s the town, the very soil of Salem’s Lot itself, that’s bad, and it’s the people who suffer for it. Death is coming whether they deserve it or not.