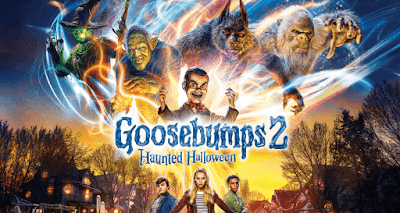 This is the movie that Goosebumps could have been.

I was very, very wary of Goosebumps when it hit theaters in 2015. I did not grow up reading the R.L. Stine books, so it's not like I was carrying baggage into the movie. But I thought the trailers made it look busy and shouty and stupid, full of bad CG and Jack Black hamming it up. When I did finally see it at the last second run theater anywhere near my hometown, I discovered that Goosebumps is the very definition of a pleasant surprise: smart, sweet, well made (minus some of that CG), and exactly the kind of movie that helps turns young kids on to being scared and loving monsters. Like in the case of The LEGO Movie, the filmmakers took what could have and should have been a bad idea and turned it into something special -- something that cares about its audience and treats them as intelligent no matter their age. 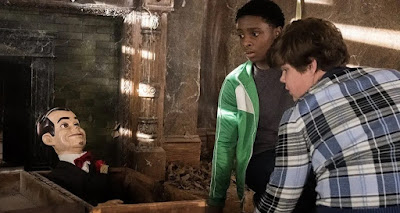 Three years later we get Goosebumps 2: Haunted Halloween, which isn't exactly the worst possible version of a Goosebumps movie, but still pretty much what I expected from the original Goosebumps. There's a script full of convenient, rule-less magic; jokes but no laughs; thinly written characters identifiable mostly by a single characteristic: science kid, friend, girl. The dramatic stakes don't ever matter and every person underreacts to every new supernatural element. It all just kind of sits there on screen, which is a bummer because it's a movie with a lot of Halloween imagery and practical monsters played by people in makeup and some really fun effects. A movie with so much stuff that I love in it should not feel this flat.

Best friends Sonny (Jeremy Ray Taylor, Ben from last year's IT) and Sam (Caleel Harris) are cleaning out the abandoned Stine house when they come across an unfinished book and Slappy the ventriloquist dummy, who is brought back to life by an incantation and wants to start a family with the boys, Sonny's older sister Sarah (Madison Iseman) and Sonny's mom (Wendy McLendon-Covey). Slappy casts a spell over the whole town that brings all of its Halloween decorations to life, leaving Sonny, Sarah, and Sam to fight the monsters off while trying to figure out how to undo the spell and trap Slappy back inside the unfinished book. Somehow, Nikola Tesla factors into all of this in a pretty major way. 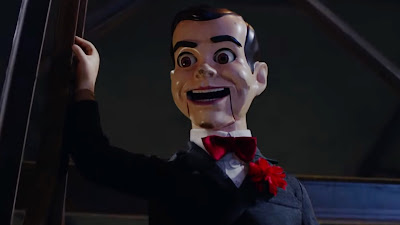 I can't quite put my finger on why Haunted Halloween doesn't really work where the original Goosebumps succeeded. When there are a bunch of monsters running around and the streets are lit with Jack-o-Lanterns, I'm having a good enough time. Everything else feels by the numbers. Taking over for Goosebumps director Rob Letterman is Ari Sandel, who made the underrated The Duff but brings little of the originality or nuance he brought to those teenage characters to this movie. The young actors are appealing enough, but the parts they're playing are generic inside of generic situations. The overall conflict of the movie is vague and non-specific, too, and it's hard to really buy into it being any kind of a threat when, as horror fans, we want monsters running around all over the place. Sending them back to some other dimension (or inside a book) is the last thing we want, especially when the alternative is being stuck with a bunch of nondescript kids. 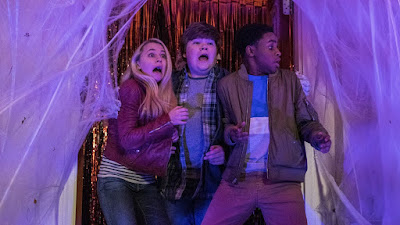 Had Haunted Halloween been the first Goosebumps movie released, I would have had no interest in seeing a sequel. This one, of course, assumes we can't wait for a follow up and ends on a stupid cliffhanger that's all the more insulting because of the presumptuousness of a bunch of studio execs. Slappy continues to be a pretty uninteresting villain, too, though I do appreciate the way he moves in the most of the shots (controlled by a hand off screen, the same way it would have been done 50 years ago). There are flashes of inspiration sprinkled throughout Goosebumps: Haunted Halloween, but most of my enjoyment came as a result of my own passions and not anything the movie was doing especially well. You have to try pretty hard to make a movie set on Halloween and full of monsters and still make me as indifferent as I am towards this one. That may be the only thing at which Haunted Halloween excels.
Posted by Patrick Bromley at 12:00 PM