Queen Songs I Love from Movies 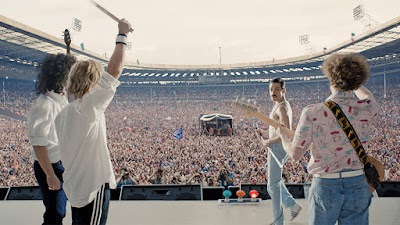 Seems appropriate since I was introduced to most of their songs in films.

I feel a lot of pressure from the world to love the movie Flash Gordon. I don’t, so I normally take the gentleman’s silence or smile and nod in fake agreement when fans sing its praises (which happens more often than you would think). What I do agree with them on, though, is the theme song by Queen is an all-timer. Among my favorite things about Queen is they sure know their way around anthems. They did a few for other movies we’ll mention later in this list, but this is the best one in my humble opinion.

Title: “One Vision”
From: Iron Eagle

I apologize in advance for the lack of Jason Gedrick in this video. I know that’s important to some of you. Remember when he didn’t check that door for heat in Backdraft? Anyways, I haven’t seen Iron Eagle (should I?) but that doesn’t matter because even without the proper context I still love this song. I want that Harlem Globetrotters pinball machine at the 0:48 mark. Was Freddie Mercury trying to break the record for shirt changes in this video?

Title: “Princes of the Universe”
From: Highlander

I can no longer count on my hands the number of times I’ve almost watched Highlander (especially during Junesploitation). I’m always drawn to it but never enough to put the Blu-ray in the machine and press play. That may change soon, because the clips in this video make it look amazing. This song gets me pumped up (That guitar! That chorus!). One thing I love about Queen is they gave everything to each soundtrack on which they were featured. I can imagine Sean Connery hearing this song for the first time, taking off his headphones and saying to Christopher Lambert “Knot Bad!” and Lambert replied, “You’re a coward, Sorcerer!” as a non-sequitur. My goodness, this is a really fantastic music video.

Title: “We Will Rock You”
From: The Mighty Ducks franchise

So, the best use of a Queen song in The Mighty Ducks franchise is when all the kids sing “We are the Champions” around a campfire at the end of the D2. However, all the clips of that on YouTube are not great, so I’m including this mash-up I found instead. It’s a greatest hits reel of the Ducks set to Queen’s stadium anthem known by every little league team who ever celebrated at a Pizza Hut. Knucklepuck. Ducks fly together. Coach Bombay. This series had it all.

Title: “Don’t Stop Me Now”
From: Shaun of the Dead

Oh man, do I love Shaun of the Dead. Every scene is great. It might be the best edited and directed comedy since The Blues Brothers??? This scene is a great example and a hint at what Edgar Wright would later go all-in on for Baby Driver. There are so many times I hear a song on the radio and think in my head what type of scene it would play in during some imaginary movie. I’m always terrible at it, but I feel like Edgar Wright did the same thing with this Queen classic and nailed it. This is one of those cases where a movie is elevated by a song choice and a song is equally bumped up by its association with a movie. P.S. That kick thing Simon Pegg does at the 1:39 mark is so great.

Title: “Somebody to Love”
From: Ella Enchanted

Reel talk: When I was a senior in college, I really wanted to see Ella Enchanted. 95% of this was due to an Anne Hathaway crush and movie crushes lead you to weird places sometimes. I had no one to see this movie with and the best I could do was go to the theater off-campus alone, never tell anyone about, and pray no one ever saw me. You might be asking “Why were you so embarrassed to see Ella Enchanted?” My answer is a) it’s a princess movie and b) I had two roommates who wouldn’t understand. I went to the theater, there was no one there except me and a group of young girls (they definitely commented “Why is he here?”), the movie wasn’t very good, and I have moved on with my life. This song is included on my list (wait a minute, 1:41 mark, she’s about to do that shit with her hair) because I adore this song and Anne Hathaway is singing & dancing, which is wonderful. Note: The special effects in this scene are not special. Also, for a guy named Hugh Dancy, he’s sure doesn’t, am I right?

Spoilers for World’s Greatest Dad. And warning about a brief pool-dong shot in the video.

If you want an example of great use of music in movies, look at this clip. It uses the terrific Queen & David Bowie song, “Under Pressure” as an emotional release for both the audience and the lead character (played by Robin Williams, who I miss) in this very underseen gem. The film’s basically all about a dad lying for 90 minutes to cover for his awful deceased son (to protect the teen’s legacy) and then just finally giving up because he realizes how shitty and fake all his son’s grievers are. I’m always amazed when a black comedy completely works and writer-director Bobcat Goldthwait achieves that with this movie – here, specifically, in a moment where this man’s career is basically over after this outburst but it’s the most soul-enriching moment in the entire film because “Fuck It!” The song choice (in title and emotional effect) is spot-on.

Of all the songs on this list, “Bohemian Rhapsody” was probably the biggest deal to me. I was really into Wayne’s World at age 10 and once I saw this scene I was convinced – a) it was the greatest song in the world and b) Mike Myers was the coolest person in Hollywood. In hindsight, both turned out to be correct. Nowadays, the funniest part of this scene for me is their friend, Phil, struggling to sing and not puke at the same time. Autobiographical pause: There is no photographic evidence of this, but I do remember being chided by my 5th grade music class teacher for lip syncing this song in class (it might have been a project or something, otherwise I don’t know why I did it) and getting carried away with air pelvic thrusts as I performed. I probably looked like Jack Black in School of Rock.

Your turn! What are some other Queen songs you love from movies?
Posted by Patrick Bromley at 12:00 PM