Here's to some streaming in your stocking. 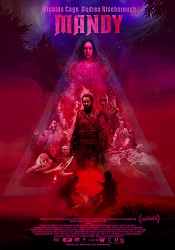 Mandy (2018, dir. Panos Cosmatos) I feel like the chances are good that if you wanted to see Mandy, the mind-blowing sophomore effort from Panos Cosmatos, you already have made it a point to see it. If you have missed it until now, though, it's streaming on Shudder. It's still probably the purest cinematic experience I've had this year and still one of my favorites of 2018. Your mileage may vary. (Watch on Shudder) 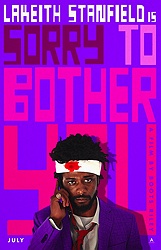 Sorry to Bother You (2018, dir. Boots Riley) I missed Sorry to Bother You during its (surprisingly successful) theatrical run earlier this year. It was on my radar because of the festival buzz, but I made a point not to read or watch anything about it. Aside from that image on the poster, I knew nothing about the movie at all. That's the best way to see it, because I can't think of another movie this year that took more audacious turns than this one. It's sharp, it's funny, it's cool, it's fucking nuts. Movies like Mandy and this one remind us of just how exciting cinema can still be. (Watch on Hulu) 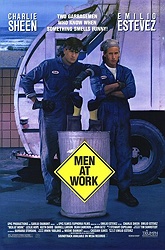 Men at Work (1990, dir. Emilio Estevez) Ok, enough of this arthouse shit. Sometimes you get tired of being challenged by cinema and just want to watch the Estevez brothers play garbagemen embroiled in a murder plot, written and directed by Emilio, an inconsistent actor and sometimes good director who shows little flair for comedy. I can't defend my affection for this movie except that I enjoy watching everyone involved fuck around, and Keith David is the absolute MVP as a Vietnam vet along for the ride. Do yourself a favor and read the "production" section of the movie's Wikipedia summary. (Watch on Amazon Prime Video) 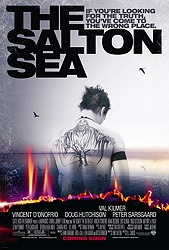 The Salton Sea (2002, dir. DJ Caruso) It's entirely possible that this is the kind of arch, obnoxious crime thriller with which we were littered in the post-Tarantino '90s. I haven't rewatched it in years. But I remember really liking it back in 2002, and I thought I had a pretty good sense for sniffing out nonsense. Don't get me wrong: there's still nonsense to be found, like Vincent D'Onofrio as a "Pooh Bear," a drug dealer who wears an artificial nose after losing his from snorting meth. But Val Kilmer is really good as a haunted musician infiltrating the world of speed freaks and the film has a lot of scuzzy color to it, as well as some genuine sadness and beauty. I can choose to rewatch it and find out it's full of shit or let it live as something decent in my memory. I haven't made up my mind about which one I'm going to go with. (Watch free with ads on Vudu)
Posted by Patrick Bromley at 5:00 AM

Email ThisBlogThis!Share to TwitterShare to FacebookShare to Pinterest
Labels: emilio estevez, i stream you stream, mandy, men at work, nicolas cage, sorry to bother you, the salton sea, val kilmer