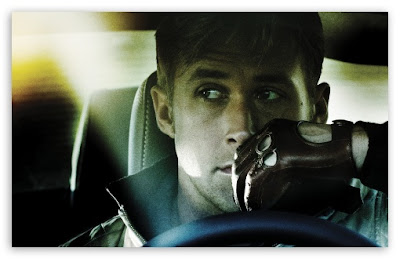 It's Erika's birthday, so let's flash back to January 2017 at a 24 hour movie marathon programmed just for her.

Today is my beautiful wife's birthday, and because movies have played such a huge role in our relationship -- from friendship to falling in love to even now after 12 years of marriage -- I thought it would be fun to program a marathon for her. Full of stuff she likes. Full of stuff that makes her happy.

Obviously this is just hypothetical, as Erika would never actually sit through 24 hours of movies. Twelve? Sure. Sixteen, maybe. It's not that she doesn't love movies as much as I do -- she does -- but she also values her health and well-being. This is where we differ. 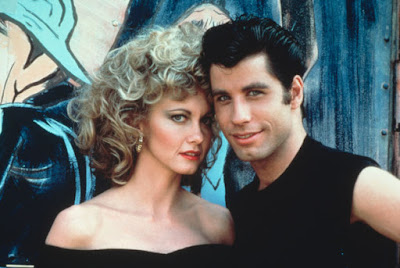 Let's start with one of Erika's childhood favorites, a movie she taped off of television and watched again and again and again until she had the whole thing memorized. She grew up wanting to be Olivia Newton John in this movie -- especially in the final moments, mostly because of her hair. I know that the messages of Grease are fairly toxic by 2017 standards, but at no point has Erika ever thought that she, like Sandy, would need to change to make someone like her. She has always been exactly who she is. While this is one of my favorite things about her, it's also proof that audiences -- even young audiences -- can enjoy a film without reading it as an endorsement of the behavior on screen. It's the same reason she grew up loving Pretty Woman without ever believing that she should become a prostitute or that a rich man would come along to rescue her. Many of us can understand the difference. 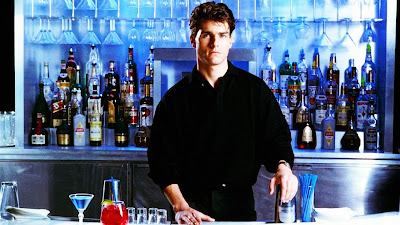 I'll be honest. I really don't like this movie. But this day is not about me, it's about Erika. And she loves it despite knowing that it is terrible. I can't program 24 hours of Erika movies without at least one Tom Cruise entry, and though there are many, many more better Tom Cruise movies (an argument with which I know E would readily agree), this is the one that represents her love for him best of all because it demonstrates that she will love him in anything. Even junk like Cocktail. 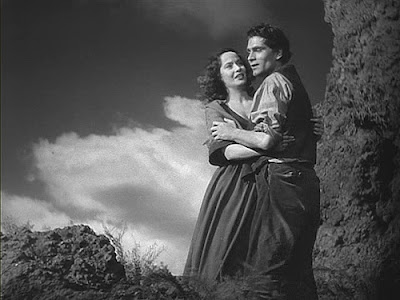 This in another one of Erika's favorite movies, but I'm a terrible person because I still haven't seen it. The movie is still hard to come by, though we have recorded it off of TCM on two separate DVRs that subsequently broke before we were able to watch it. We have it on our current DVR now, which means its days are probably numbered. Putting it early in the lineup of this marathon guarantees I'll finally be able to watch it with her with a minimal chance of falling asleep. Plus, putting a classic film into the lineup makes me seem really smart and cultured when I'm really just a dummy. Don't tell Erika. 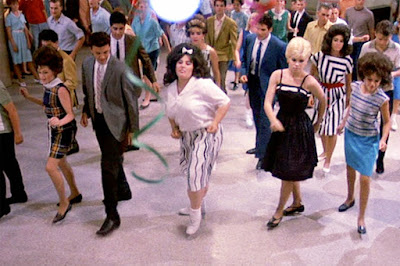 It selfishly makes me really happy that one of my wife's favorite movies is from John Waters. I mean, I knew she was super cool already, but how cool is that? This was another film she grew up loving, and one of the major reasons -- besides the fun and the dancing and the period style -- is the movie's passion for social justice. This is something that she has been drawn to her whole life and it's one of the coolest things about her. It's great that we can sit together and watch this and she'll be thinking about civil rights and I will be secretly excited that she loves this movie made by the same guy who filmed a drag queen eating poo. This is how we make our marriage work. 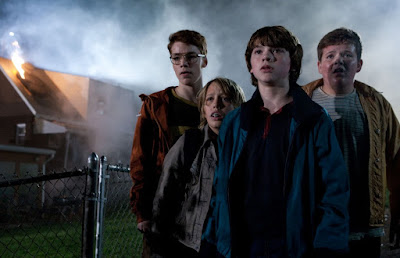 After a series of nostalgia picks, it's time to program a movie that Erika and I fell in love with together. One of the reasons we got together in the first place was because we both responded to many of the same songs and movies and in a very similar way; sometimes, we couldn't explain exactly what it was, but just knew that the other person got it. From the first time we saw Super 8 together, we both fell for all of it -- the sadness, the adventure, the humor, the nostalgia, the feeling that life was different then. It's a movie we can sit down and watch together any time, and just because we don't (she shows it in her film class every semester) doesn't mean it's not something that's special to us both. 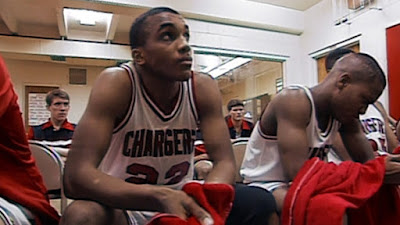 I don't think I could ever get Erika to commit to choosing a single movie as her all-time favorite (she would feel too bad about leaving something else out), but I have a strong suspicion that it's actually the 1994 documentary Hoop Dreams. There's no other movie she talks about with as much reverence and passion, and it's not because she's an especially big basketball fan. It has everything to do with empathy -- with getting to know the two young Chicago boys, Arther Agee and William Gates, and following them through their successes and heartbreaks. This is one of the best documentaries ever made, but it's one I like even more because I'm able to experience it through her eyes. At three hours, we really can't program this one any later so it needs to be the centerpiece of the marathon. 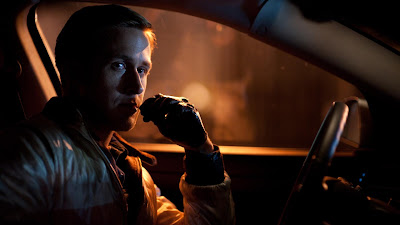 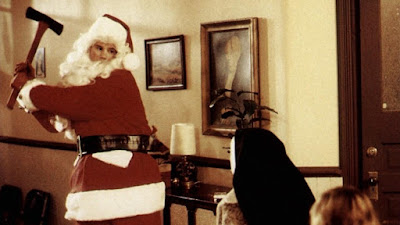 I usually like to get weird during the overnight sections of these 24-hour marathons and program some fucked up horror movies, but Erika's not necessarily the biggest fan of horror. Having said that, there are two horror movies that I will forever associate with her because they were the ones she grew up watching at sleepovers with her two best friends. She once even wrote a piece about Silent Night, Deadly Night that made me love her more than I already did. Her affection for this movie helps explain why she yells "PUNISH" every time I do something wrong. Just kidding! I don't do anything wrong. Just kidding! She doesn't yell at me. 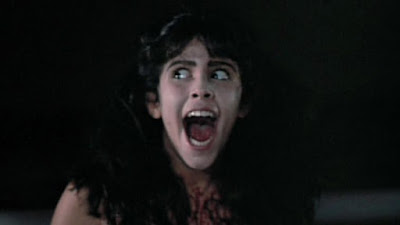 This is a horror movie I've come to love a lot over the last 15 years and one that has become very special at F This Movie!, as it was the first #ScaryMovieMonth commentary we ever recorded. I owe all of that to Erika, who introduced me to the movie when we were first dating. It's not one that I grew up with, but it was for her. How she watched something this crazy and didn't develop more of a taste for lunatic horror I will never understand, but I'm forever grateful to her for showing me this one. I mean, for lots of other things too. Like our kids. But mostly Sleepaway Camp. 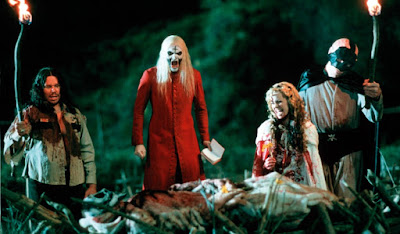 Despite the fact that she's not a huge horror fan, Erika is way into Rob Zombie's movies (not so much the Halloween films or 31, but I can't blame her for that one). This is a consistent source of amusement to me, because his movies are nastier and more horrific than a lot of what's out there. I can remember us being among the few to actually see this film when it played in theaters in 2003 and loving the fact that Erika loved it. She likes The Devil's Rejects way more, but this one will play better at 4 a.m. Plus I think The Devil's Rejects will be too genuinely upsetting to her, because it speaks right to a lot of things she is legitimately afraid of. House of 1000 Corpses is more fun. 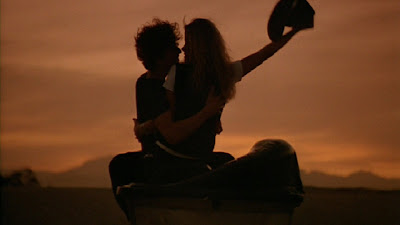 After keeping her awake all night and asking her to sit through three consecutive horror movies, it seems fair to bring in the sunrise with another nostalgic favorite -- one of those films that Erika can quote from memory. I used to play this game where I would stumble across Can't Buy Me Love on TV and see how long I could leave it on before she would identify it from the other room. It was always only a single line of dialogue, or sometimes just a few notes of the score. Fucking amazing. It's not a significantly better movie than Cocktail, but it has a lot of '80s teen movie charm and I could easily watch it any time. 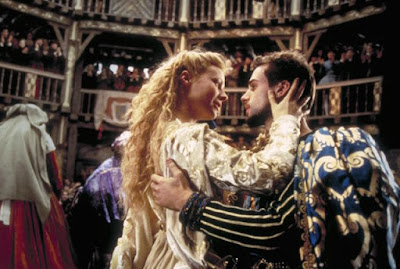 Let's wrap up these 24 hours with another movie we fell in love with together, and one that played a big part in our eventually getting together. All Erika ever wanted was someone who looks at her the way Joseph Fiennes looks at Gwyneth Paltrow in this movie. I'm that person for her. I hope she'll still look at me like that after sitting through this many movies.

Happy birthday, Bue. I love you.
Posted by Patrick Bromley at 12:00 PM