Reserved Seating Goes All Pacino: ...AND JUSTICE FOR ALL 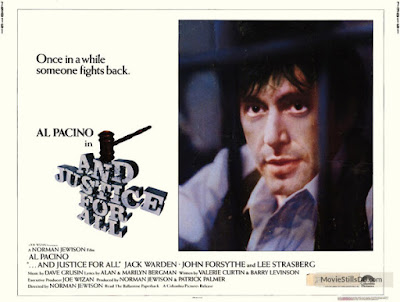 The review duo who are out of order!

Rob: Our All Pacino series enters its third year (you’re welcome) with Norman Jewison’s 1979 film, ...And Justice for All. Ostensibly a courtroom drama — though we’ll debate that classification, I’m sure — the story follows Pacino’s defense attorney Arthur Kirkland as he navigates his way through a complex cast of clients, judges, family members, and colleagues, all of them emblematic of his soul-crushing frustration with a corrupt and inequitable Baltimore justice system. When he’s not serving his own jail time for punching judges, Arthur wants to do good: he takes on the cases of the downtrodden and the destitute. He champions the little guy. He helps the helpless. But when his arch-rival Judge Fleming (John Forsythe) is accused of rape and inexplicably recruits Kirkland as his defense counsel, the young lawyer fears that he’ll have to sacrifice his ethical standards if he wants to stay in business.

This was my first viewing of ...And Justice for All (boy, that ellipsis is irritating to type), and while I was caught off guard by its haphazard tonal shifts and often sweaty, claustrophobic point of view (otherwise known as “the ‘70s of it all”), I found myself getting into the insanity. It feels arch and prestigious at first, and you get the sense that Pacino is continuing the Important Work of films like Serpico or Dog Day Afternoon. And this is that, to an extent -- Pacino delivers dramatic monologues and slams things in anger. But he also goes on a whimsical helicopter ride with a suicidal judge (Jack Warden) and faces down his partner (Jeffrey Tambor) as he manically throws cafeteria dishes at building security. ...And Justice for All is weird. It’s got its chocolate all up in its peanut butter.

But the more I think about it, the more I think that this is a Two for the Money or an Any Given Sunday, a Pacino film with so much strange personality that it becomes endearing. Nothing about it upset me, really; it’s full of good performances and carries a resonant message about our flawed pursuit of justice. When it decides it wants to be about that, it succeeds, and I couldn’t help but get kind of caught up in its cockeyed orbit. I think that’s because none of its discordance is really discordant, if that makes sense. Everything clashes, but it’s not loud. It works enough in the ways that it has to in order to stay interesting. But boy, it’s strange. 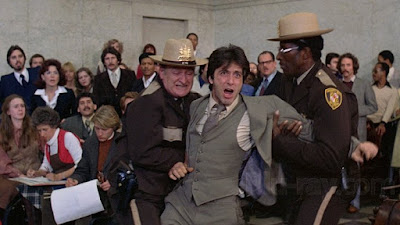 Adam: You’re absolutely right -- this movie’s strange. I was talking to JB about it and the way I described my first impression to him was it felt like an entire David E. Kelly-produced TV series distilled into a two-hour movie. Overall, I think I’m more mixed-negative on the movie as a whole. ...And Justice For All is most remembered for the explosive Al Pacino meltdown at the conclusion, and it’s indeed fantastic and a catharsis for not only the main character but the audience as well. My annoyance is because I feel like the rest of the movie is reverse engineered from that moment. The message is too explicit for my taste. I think Norman Jewison is trying and his heart is certainly in the right place, but I felt like I was being talked down to in a certain way because Al Pacino is so in the right and practically every other character is in the wrong. You can call it satire or farce if you want; I’m just not a fan of that sledgehammer approach most of the time.

The tone of the movie is all over the place. You mentioned Serpico and Dog Day Afternoon earlier. ...And Justice For All feels like a bridge between those films and something broader and more inexplicable like Author, Author. Pacino is really terrific in ...And Justice For All (although he doesn’t play broad comedy well...e.g. the helicopter digression with Jack Warden is something out of Used Cars), but I feel like he’s often in a different movie than the one Norman Jewison is making. It’s not the actor’s fault, because Pacino is being true to his character and the rest of the film is throwing tonal obstacles at him every five minutes. ...And Justice For All is certainly a curiosity but feels inferior to the previous Pacino-Lumet collaborations I couldn’t help compare it to. It’s firmly in the 2.5 star out of 4 group for me, but feels worse because of how incredible The Godfather, The Godfather Part II, Serpico and Dog Day Afternoon are. ...And Justice For All is the movie Adam McKay would have made in 1979.

Rob: All of your points are well taken, and I absolutely agree that the tonal inconsistencies sink so many would-be great moments that the film can’t escape the 2.5-star range. But I think it’s my love for stuff like The Wire or Serial Season 3 — other works that address our societal ills with both brutal darkness and absurd humor — that keeps me on the mixed/positive side. They’re very different works, of course, but it’s that “laugh to keep from crying” principle (like the moment where Judge Rayford is interrupted trying to eat his shotgun in the bathroom) that occasionally gives the film a pulse, for good or ill. It could also be all my time spent as a high school teacher — a small cog in an often brutal wheel, alternately laughing and crying over the absurdity of my job, depending on the hour — that helped me connect. But we all have that feeling at work, so who knows? Any way you slice it, ...And Justice for All pales in comparison to the Serpicos and Dog Day Afternoons in Al’s filmography. 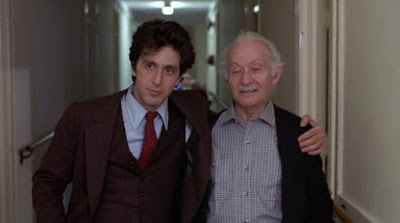 So as you said before: ...And Justice for All would have been far better served choosing one or the other: Make a quirky workplace dramedy about a little fish in a big pond, a dogged do-gooder looking for love and taking down corrupt bureaucrats (the David E. Kelly route), or make a Lumet-style epic that grinds Al down and forces him to his absolute humanist, existential limit and culminates in the brilliant monologue for which the film is so well remembered. There might be a middle ground, but it’s not here. Especially not when the Tambor/Warden stuff is mostly played for laughs, while the threads involving Kirkland’s main clients (Thomas G. Waite’s wrongfully-accused McCullaugh and Robert Christian’s transgender Agee) result in tragedy. Maybe the key is Christine Lahti’s Gail Packer, an ethics investigator with whom Kirkland becomes romantically involved: She’s presented as a kind of foil for Kirkland because she can’t see the forest for the trees the way he can. But does she ever really challenge him? Does she have real efficacy? It feels like a wasted opportunity, as does the brilliant Lee Strasberg as Al’s grandpa, whose few scenes largely repeat thematic beats rather than reinforce new ones. If only those threads had come together a little tighter.

Adam: Yeah, everything on its own is fine. It’s just most of the material feels like we’re going over it twice or the conversations end up repeating the same points. I liked the theme song (“Something Funny Goin’ On”) that plays as an instrumental version over the opening credits and with lyrics during the end credits. It’s fun! JB sent me a text with a video of him singing it. He has a history with this movie that I’d love for him to tell everyone in the comments. 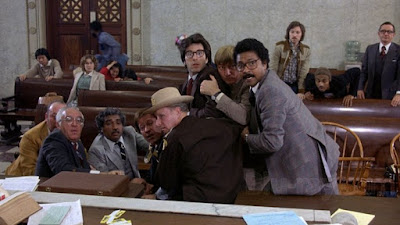 This is shaping up to be a giant year for Al Pacino. He has a supporting role in Quentin Tarantino’s Once Upon a Time in Hollywood, is playing Jimmy Hoffa in Martin Scorsese’s The Irishman, and most recently has been tapped to star in a Jordan Peele-executive produced television series called The Hunt. We haven’t gotten into much of Al’s work this decade yet (it’s spotty if you don’t count his HBO movies), so I’m glad he’s finishing it out strong.

Rob: Nazi hunter Al? What did I do to deserve this blessing? But is it strange that The Irishman feels like a bit of a wild card right now? It’s not that I don’t have faith in Scorsese or that I don’t think he has the energy for a gangster epic (The Wolf of Wall Street was only six years ago). I just hope Bobby and Joey and Al and Harvey and the gang all bring their A-game for what looks like one of Marty’s last hurrahs in this genre. I don’t want it to feel tired, stuffy, or derivative. I know I shouldn’t even have doubts, so I’ll just classify these comments as more of a “cautious curiosity.” Either way, it’s going to be a great year for Pacino fans.

Adam: The only thing that gives me pause with The Irishman is the de-aging technology they’re using. I just don’t want to be distracted by it. I’m most excited that Joe Pesci is returning to film. I miss that guy. Next week we’ll be back with more Reserved Seating. The topic is TBD! Until next time…