Step right up, ladies and gentlemen. Listen while I explain how I can save all of you THIRTY-FIVE BUCKS!

This week I present the following proposition to all of my loyal readers. With one hand, I’m going to gift you with $35. You’re welcome. How, you ask? Simple—by persuading you NOT to buy two recent discs that would set you back $35. No matter how curious, how bored, or how much of a @#$*&^%#! completist you consider yourself to be, just clutch your wallet or purse tightly and KEEP WALKING.

For the love of all things holy, keep walking. 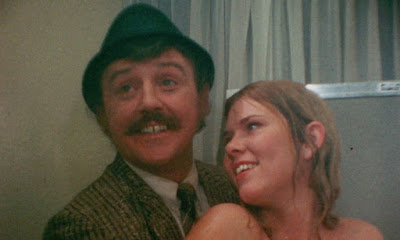 I am a big fan of Ed Wood (and not always ironically—listen to the award-winning podcast Patrick and I recorded on Plan 9 From Outer Space) and I was pleased when I heard that an actual print of Wood’s “final” film, the thought-to-be-lost Take It Out in Trade, was being restored and released by the fine folks at AGFA. I bought the disc.

The Plot in Brief: Detective Mac McGregor (Michael Donovan O’Donnell) is hired by a set of worried parents to find their missing daughter, Shirley (Donna Stanley). McGregor helpfully informs the audience, “Sex. That’s where I come in. Dead or alive, sex is always in need of my services. A service to which I sincerely apply myself wholeheartedly—sometimes even in the daylight hours!” Can you tell that besides directing, Ed Wood also WROTE this film?

McGregor takes full advantage of the parents’ deep pockets and flies off to multiple foreign countries to track down leads. We are treated to stock footage of planes taking off and landing, ludicrous travel posters to tell us where we are, and McGregor spying on local suspects in various stages of undress before returning home. Lather, rinse, and repeat. The number of countries McGregor visits seems to have been determined by how much padding Wood figured he needed to get this thin premise up to feature length.

Because Wood was such an… obsessive filmmaker, we are treated to endless shots of half-naked women descending a red shag-carpeted staircase. Why? Did Wood feel the rich, scarlet carpet showed off the film’s chief virtue: that it is in COLOR? Did he feel the staircase helped him to compose shots that would be visually appealing to an audience? Did he have a staircase fetish? Watching Take It Out in Trade lets us inside the mind of Ed Wood; it’s a strange, uncomfortable place to be. 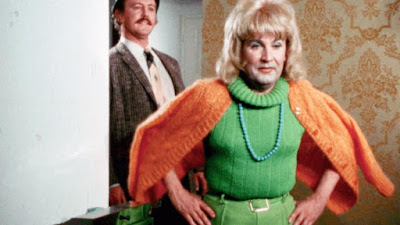 This film is bizarre in so many different ways. Though made in the early 1970s, it harkens back to the mid-1960s and the nudie-cutie aesthetic of early Russ Meyer and David Friedman. Films of this ilk usually contain hypocritical moralizing about the dens of inequity being portrayed, but the sex workers in Take It Out in Trade are a happy bunch, who seem to enjoy what they’re doing. After Shirley is “saved” from her life of vice and returned to her parents, she chooses to go back to being a prostitute. At one point the detective interviews a transgendered couple for clues; the couple is portrayed as perfectly normal, which is quite unusual for the ’70s. Wood himself plays Alecia, and I believe beside Glen or Glenda, it’s the only time Wood appeared in drag in a film.

If you’re interested in Ed Wood’s later years of alcoholism and homelessness, you may want to see this film; but this is a film to watch, not to own. The sad reality of Ed Wood’s life (the part of his career Tim Burton chose not to show in his eponymous film) negates the pleasures of ironic repeat viewings, and the key emotions triggered by this film are sadness and tedium. Why doesn’t Red Box stock movies like these—discs that scream for single-viewing-only rentals?

My advice: do not purchase Take It Out in Trade. Though the disc contains 70 minutes of outtakes (previously released by Something Weird); a commentary track with Frank Henenlotter and Rudolph Grey; and a bonus short, "The Love Feast"; keep your double sawbuck in your pocket and KEEP WALKING. 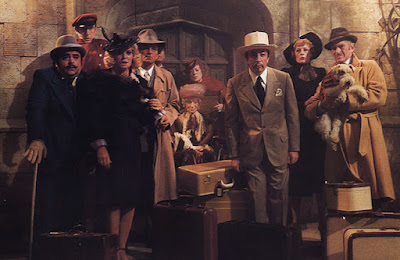 I used to have such a warm spot in my heart for the 1976 Neil Simon film Murder By Death. Fourteen-year-old me thought it was a hoot and a half. Maybe that self-satisfied laughter me, congratulating myself for “getting” all the jokes, many of which depend on a familiarity with Hollywood detective films of the 1930s and 1940s. When I saw the film was finally being released on Blu-ray, I bought the disc.

Re-watching the film four decades later, I felt the dreaded “Goonies Derivation” kick in more strongly than I have ever felt before. As it turns out, Murder By Death is a piece of shit. Obvious, simplistic, and crude, it seems concocted by failed sitcom writers during a prolonged strike.

The Plot In Brief: Lionel Twain (Truman Capote) invites the world’s greatest detectives to his mansion one dark and stormy night. He intends to stage a murder and flummox his famous guests, thereby proving that Twain himself is, in fact, the greatest detective in the world. Trying to solve the murder are San Francisco’s Sam Diamond (Peter Falk) and his long-suffering secretary, Tess (Eileen Brennan); Milo Perrier (James Coco) and his chauffeur, Marcel (James Cromwell); Jessica Marbles (Elsa Lanchester) and her Nurse (Estelle Winwood); the sparkling and witty Dick and Dora Charleston (David Niven and Maggie Smith); and Sidney Wang (Peter Sellers) and his number-one-son Willie (Richard Narita). These character names might give you some idea of the level of humor in the film itself. Sam DIAMOND is the “comedy version” of Humphrey Bogart’s famous detective Sam SPADE in The Maltese Falcon, you see, because both “DIAMOND” and “SPADE” are suits in a deck of cards… and that’s a JOKE if you had NEVER in your life heard a joke nor had INTERACTION of any kind with a HUMAN on this PLANET. “Sam DIAMOND… how very witty, Mr. Simon, how very, very witty!”

What follows is 94 minutes of boring nonsense. The murder mystery plot is so complicated that it makes no sense, and so Simon’s cast of (too many) characters simply stands around exchanging tired dialogue and obvious humor. “Jokes” focusing on urine and flatulence abound. David Niven and Maggie Smith do their best, but it is not enough to save this tired exercise. I was embarrassed that personal favorite Elsa Lanchester (who played the goddamned Bride of Frankenstein, for Chrissakes!) had to appear in films like this at the end of her career. Alec Guinness plays a blind butler; Nancy Walker plays a deaf-mute cook. Imagine the comic complications that could arise from that hilarious premise! No, really: imagine the comedy, because Neil Simon clearly could not. 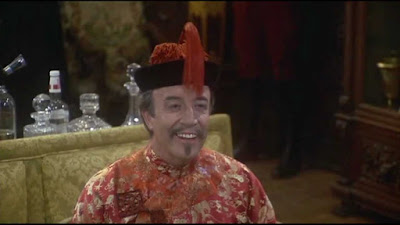 Modern viewers will be struck by Peter Sellers’s performance as Sidney Wang. The character’s fifth-grade dick joke of a name is actually the least offensive aspect of this character. Inspired by Charlie Chan movies of the 1930s and ’40s (when Chan and others were often played by non-Asian actors—good Lord--Boris Karloff played Fu Manchu!) Peter Sellers’ portrayal is painfully dated and insensitive, an embarrassing remnant of a far less “woke” era (era). At one point, Sam Diamond (Hee-hee, that name!) even calls Wang (excuse me) “Slanty.” It might help if the Wang character were given more to do than insult his son and spout fatuous, fortune cookie-style sobriquets. None of it is funny. EXAMPLE: “This conversation like television set on honeymoon: unnecessary.” Seller’s make-up alone, complete with eye-lid appliances and false, jutting teeth, is pure cringe.

CAVEAT: Watching Murder by Death again after so many years, I noticed just how deep a debt of gratitude is owed by 1985’s Clue—structurally, at least. Perhaps part of this hangs on just how clichéd most drawing room murder mysteries really are, but Clue now looks like an enlightened remake of Murder By Death, with better performances and funnier jokes. I am not the biggest fan of Clue (sorry, Heather), but Murder By Death makes Clue looks like a masterpiece of comic invention. My opinion: more like Murder by DON’T. Skip this mess, save your $15, and KEEP WALKING.

The recent Indicator/Powerhouse Blu-ray of Jacques Tourneur’s Night of the Demon (1957) is one of the best classic horror film releases in the last several years. The film itself is a masterpiece. Film historians gleefully discuss the controversy of the producers’ insistence on showing the film’s monster explicitly, while the director favored a more suggestive approach. What complicates this common tale of art versus commerce is that the monster itself is really cool.

The Plot in Brief: Dr. John Holden (Dana Andrews) attends a paranormal psychology conference to debunk the supernatural “powers” of mysterious cult leader/children’s birthday party clown Julian Karswell (Nial MacGinnis). Perhaps knowing that one should keep one’s enemies close, Karswell invites Holden to stay with him at his estate. Karswell hides a possibly cursed scroll in Holden’s briefcase. Holden begins to believe he might be wrong about Karswell—dead wrong. His only hope is to return the scroll and break the strange spell. Wait a minute, why is there an enormous dragon monster loitering by the train tracks?

What distinguishes this disc, and makes it worth our $35, are the superior transfers, the wealth of supplementary features, and one of the best commentary tracks I have heard in a long time by film historian Tony Earnshaw. We are also treated to FOUR presentations of the film: the original full-length pre-release version (96 mins) and the original UK theatrical cut (82 minutes), both named Night of the Demon; plus, the original US theatrical cut (82 mins) and the US re-issue version (96 mins), both named Curse of the Demon. There are also no fewer than ten featurettes devoted to different aspects of the film. 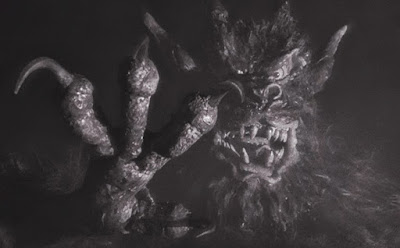 This is an embarrassment of riches. My favorite supplement is “Cloven in Two,” a featurette that discusses in concise and exacting detail the differences between the four versions of the film. Most importantly, it discusses the effects these changes would have on an audience trying to understand and enjoy the film. This featurette emerges as one of the best tutorials on film editing I have ever seen, considering the effect on NARRATIVE of various cuts and changes. It goes so much further than most documentaries on the subject. We also get a fun “Super 8” version of the film, representing the Castle Films home movie version of Night of the Demon from the early 1970s. The disc also features an isolated music and effects track. This is clearly one of the best archival horror releases in quite some time.

AN ANNOYING AUTOBIOGRAPHICAL PAUSE: Watching this amazing disc actually explained one of the jokes in The Rocky Horror Picture Show’s first song, “Science Fiction/Double Feature.” The narrator sings, “Dana Andrews said prunes gave him the runes, and passing them used lots of skills.” What a young JB assumed was just a random diarrhea pun turns out to be songwriter Richard O’Brien not just referencing Night of the Demon, but also its source novel, “Casting the Runes.” I love learning!

The Pudatsa giveth… and the Pudatsa taketh away. Please invest the money you would have wasted on the rare missteps from AGFA and Shout Select and invest it wisely in the new Night of the Demon package. So I have it written; so shall it be done.
Posted by Patrick Bromley at 5:00 AM