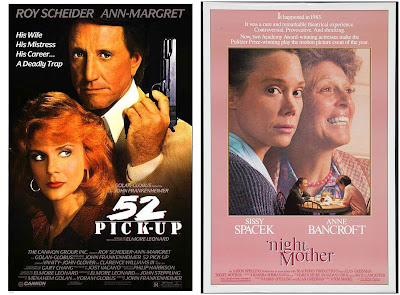 Two movies from my birth year that I’ve been meaning to see. Now I have! 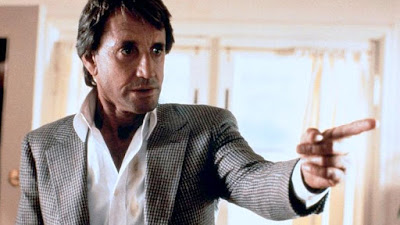 This year’s #Scheidersploitation starts early with 52 Pick-Up, John Frankenheimer’s 1986 thriller based on the novel of the same name by Elmore Leonard (author of Get Shorty and Rum Punch, the latter of which you might know better as Jackie Brown). Roy Scheider is Los Angeles businessman Harry Mitchell, whose extramarital liaisons with Cini (Kelly Preston) have earned him the attention of blackmailer Alan Raimy (John Glover). Raimy demands $105,000 in exchange for the evidence, but Mitchell — whose wife Barbara (Ann-Margret) is planning a run for city council — balks, deciding instead to come clean to Barbara and end the affair. Raimy and his goons (Robert Trebor and Clarence Williams III) double down by killing Cini and threatening Barbara, so Mitchell hatches a scheme (with the help of Prince protégé Vanity) to even the score.

Though I’ve appreciated him as an important cinematic voice for a long time, it took recent viewings of The Taking of Pelham One Two Three and Ronin for me to really understand what make John Frankenheimer’s style and sensibilities so special. He and Roy Scheider teaming up with Elmore Leonard and the Cannon Group sounded like a perfect cocktail of pulpy action schlock, and while 52 Pick-Up might not be perfect, it’s remarkable to see how well those varying flavors melt together: There’s that Cannon sleaze (typified by Raimy’s pornography operation and Vanity’s role in it), that Elmore Leonard wit (including one of the screen’s only hero/villain standoffs featuring an accounting ledger) and Frankenheimer’s recurring theme of honor among thieves (an especially good one here, with Raimy’s operation slowly spiraling into a paranoid clusterfuck of mania and betrayal).

As a longtime fan of Roy Scheider’s portrayal of Jaws’ valiant Chief Brody, it was also great fun to see him play a bit of a prick. Harry Mitchell isn’t as bad as the murderers and rapists he’s facing-off with, of course, but Scheider weaponizes his trademark leathery guile in a unique way in 52 Pick-Up, especially in one scene with Vanity in which an interrogation is masked as a strip show. Or is it the other way around? We can tell Mitchell has been in back rooms like these before, and while he’s not explicitly here for what Vanity is offering, he’s not exactly ignoring it, either. Better still is John Glover’s wiry pornmonger, Raimy. He’s a charming sociopath (dualistic traits emphasized by the actor’s heterochromia), an unpredictable killer obsessed with his video camera. His tense and layered performance gives 52 Pick-Up its edge and elevates it above the usual Cannon fodder. 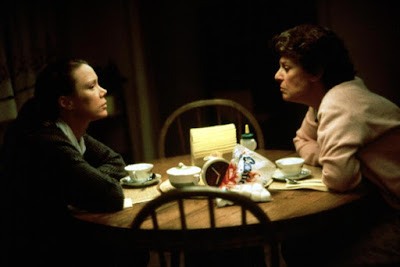 ‘night, Mother is about suicide. I need everyone reading this to know that before reading any further. The lead character develops a plan to take her own life and executes it before the story ends. This is exactly as tragic and upsetting as it sounds, but ‘night, Mother isn’t melodramatic. It’s not sanctimonious, and it’s not didactic. It doesn’t judge Jessie (Sissy Spacek) for her decision, nor does it judge her mother Thelma (Anne Bancroft) for her failure to understand it. Based on the 1981 play by Marsha Norman (who adapts her own work for the screen), it’s a simple two-hander set in a country house over the course of a single evening. Jessie is a divorcée who has moved home to care for the widowed Thelma. Epileptic episodes have limited her career prospects, but she finds purpose in everyday rituals. She and her mother lead lives that are quiet, comfortable, and defined by repetition. Until one night, when, casually and without warning, Jessie tells her mother that she’s going to shoot herself with her late father’s pistol.

What follows is the finest and most even-handed exploration of depression and suicide that I’ve yet to see on film. Jessie is not visibly distraught or physically incapacitated when we meet her. Instead, she’s bright and full of life, whittling away at household chores while her mother works in the garden. Drawers are organized, clothes are folded, and meals are prepared. She’s jotting things down and cleaning things up. It’s a few minutes before we realize that she’s making her own final arrangements, indexing heirlooms and labeling items for whoever will sort through them after she’s gone. It’s that prosaic routine that many stories ignore when chronicling (and often unintentionally glorifying) suicide. Depression is not a mood. It’s not the same as feeling sad. A person can go about their day in a clear-minded and coherent way — laughing, singing, and drinking their mother’s famous hot cocoa— and still feel like dying. There are not always external stressors or catastrophic triggers. For many, it’s a state of being.

Emotional intelligence aside, ‘night, Mother also proves that the flashiest performance isn’t always the best. Anne Bancroft is extraordinary as Thelma, whose emotional arc takes her through the stages of grief in a desperate attempt to save her daughter’s life, but Sissy Spacek has the harder job. Jessie is intelligent, capable, and sober. She’s not hysterical. She’s not a Movie Psycho. She is, in both form and function, the film’s high status character. Spacek plays her with dignity and resolve, never missing an opportunity to assert her dominance or guide the flabbergasted Thelma through the basic and irrefutable logic at the core of her decision: She’s failed as a mother and a wife, as far as she’s concerned. What’s left? Do the math. She compares life to a bus ride: “Even if I ride fifty more years and get off then, it’s still the same place when I step down to it.”

That doesn’t change. There are no revelations or new perspectives. Jessie does what she set out to do, leaving her mother to wonder how she could have prevented it. It’s a bleak ending. It would be difficult to justify in our current environment. We would insist on something more hopeful, something that shows audiences that there is a way out, that there’s something we can do. That it doesn’t have to be this way. And while I hesitate to celebrate ‘night, Mother out of sensitivity to that principle, I also feel a responsibility to acknowledge the film’s unflinching bravery. Jessie’s feelings are real. They have weight and value. They have consequences. The miracle of ‘night, Mother is that it respects Jessie’s agency without glorifying her decision. It doesn’t assign fault or punishment. A person fighting depression is generally uninterested in blame or revenge. There’s no victory or glory in it. Suicide, as Jessie tells us, is simply a road to peace and quiet. The sooner we start acknowledging that, the sooner we can fight back.