Thanks to the fine folks at Arrow Video and the Criterion Collection this week, we are presented with a unique double feature opportunity… you know, TWICE THE FUN!

Arriving in the mail on the same week because of the random serendipity of Blu-ray release dates, I Wanna Hold Your Hand & Strip Nude For Your Killer make for the PERFECT double feature. What’s the connection, you ask? Well, ummmmm… you see, the two films compliment… No, I mean… We can take the titles to be the COMPLETE SPECTRUM OF MODERN DATING… By that I mean that what begins as innocent hand holding in junior high eventually “graduates” to… Ummmm. Fuck. Forget it. Forget I said anything. By “perfect,” I guess I meant that the two films have absolutely nothing in common.

THESE are JUST THE THINGS for which ALL of my GENTLE READERS are ALWAYS in the MOOD: Robert Zemekis’ debut film, a CRAZY COMEDY, and an Edwige Fenech SOFT-CORE GIALLO! POP some CORN and LOWER the window shades, MAMA! 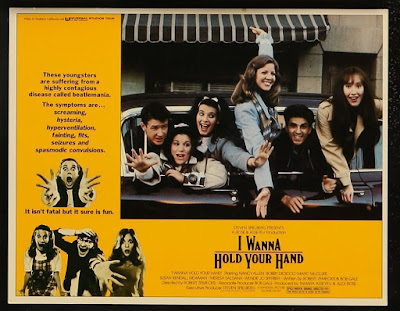 I Wanna Hold Your Hand, just released by the Criterion Collection, is a great debut film. Writer Bob Gale and writer/director Robert Zemekis would go on to Used Cars, the script for 1941, and, of course, Back to the Future. I Wanna Hold Your Hand stands as a kind of template for those later pictures in which, though the acting and directing become more accomplished, are all scripts predicated on people running amok, all hell breaking loose, and a kind of jaundiced (but still golden) nostalgia for the past. In fact, the climax of I Wanna Hold Your Hand, detailing all the behind-the-scenes nonsense going on while the Beatles made their famous debut on The Ed Sullivan Show, seems to be the blueprint for the famous sequence in the later Back to the Future Part II, where the filmmakers return to the Hill Valley Enchantment Under the Sea dance to show the audience all the time-traveling excitement behind the scenes that we DIDN’T get to see in the original Back to the Future.

The Plot in Brief: On the eve of the Beatles’ debut performance on the Ed Sullivan Show in February of 1964, four New Jersey teens hatch a plan to meet the band up close and personal: superfan Rosie (Wendie Jo Sperber), student journalist Grace (Teresa Saldana), reluctant Pam (Nancy Allen), and proto-hippie protester Janis (Susan Kendall Newman). The next 24 hours will include help from like-minded fellow fans, underage drinking and driving, and even an act of God. 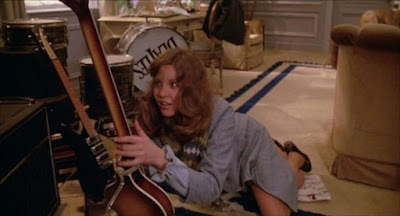 The cast of then newcomers is uniformly excellent. I Wanna Hold Your Hand was Teresa Saldana, Wendie Jo Sperber, and Bobby DiCiccio’s film debuts. This was Nancy Allen’s fourth film; she had just appeared in Carrie the previous year. It was also Marc McClure’s fourth film; he would appear as Jimmy Olsen in Superman later in 1978. It was only Eddie Deezen’s second film; he had just appeared in Grease. The cast works well together. They all seem like a young, suburban community theater company that has been together for years. Nancy Allen remembers, in an interview included as a bonus feature on the new disc, that Gale and Zemekis were so new to filmmaking that on the first day of rehearsals, they asked her what Brian De Palma had done on the first day of rehearsals for Carrie, and then they just did THAT.

My one quibble with the film (aside from some Beatle-centric trivia the film gets wrong, with which I will not bore you) is that it is a little low on jokes. Crazy situations? Unique characters? Physical comedy? Breakneck pace? Youthful joie de vivre? The film has all of these in abundance. I could just use more jokes. I like a show with jokes. This could just be the case with many Gale/Zemekis scripts, (I’m looking at you, 1941.) which are big on situational comedy and a little skimpy on witty dialogue or actual joke jokes. Again, this is just a quibble. I Wanna Hold Your Hand features many people smashing through plate glass windows and one woman making love to a guitar; I just wish that the things these people said were funnier and that NOT EVERYTHING was SHOUTED. 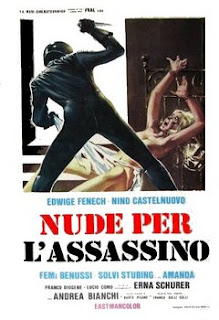 Strip Nude for Your Killer presents an interesting dichotomy. Whenever a new film genre is established and on its way to critical praise, think pieces in magazines, monographs, and film history books, some dope comes along and decides to try a genre hybrid. Seldom are these experiments successful. Horror comedies? You can count the good ones on both hands. (A & C Meet Frankenstein, The Fearless Vampire Killers, Shaun of the Dead) Horror Musicals? Even fewer. (Phantom of the Paradise, Rocky Horror, the recent Anna and the Apocalypse) I’m still waiting for a Giallo Western, although I suppose Bone Tomahawk comes close.

Giallo Musical? This is just waiting to be written, given that many giallo movie titles sound like Broadway show tunes to begin with: “Your Vice is a Locked Room (and Only I Have the Key),” “What Have You Done to Solange?” “Lizard in a Woman’s Skin,” “The Night Evelyn Came Out of the Grave,” “Opera,” “Deep Red,” and “All the Colors of the Dark.” I would fly to New York to see THAT show!

The Plot in Brief: After a routine procedure goes horribly wrong at a doctor’s office, a mysterious black-clad figure starts killing all the employees of a famous modeling agency. Stripping nude, apparently, helps the knife go in so much easier! Will anyone be left to photograph ads for fur coats and motorcycles if the killer is not caught? 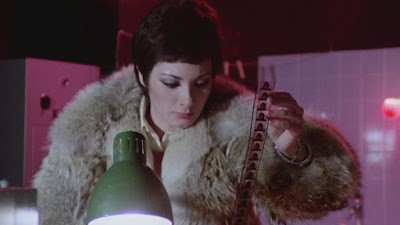 Andrea Bianchi’s Strip Nude for Your Killer seems to be that easiest of genre hybrid: the soft-core Giallo. (Most giallos are already halfway to being shown on Cinemax at 3am.) Neither genre gains anything with the mash-up. The seeming obsession to get every character naked for extended periods of time means that the murder mystery is often put on hold. It’s as if three fourteen year-old boys got together and used the making of this film to see a whole lot of boobs. On the giallo side, the specifics of the “Who is the killer in the leather outfit and motorcycle helmet?” plot device is just too easy to figure out in the film’s first fifteen minutes. Hey, genre filmmakers! If you are filming a cool murder mystery, DON’T HAVE AT LEAST THREE SUSPECTS WHO COULDN’T POSSIBLY FIT IN THE MURDERER’S STABBING SUIT!

THE CRITICS RAVE: I am not alone in thinking this film is second rate and amateurish. “Super Reviewer” Aj V on the Rotten Tomatoes reports, “It was boring in the time between killings.” “Super Reviewer” Cassandra Maples enthuses, “…Director Andrea Bianchi must have had a great time making it, as filming naked women and bloody murders looks like a lot of fun!” Someone named “Trash Gang” over at the IMDB opines, “For a giallo it's a bit low on gore and even red stuff [….] Don't be fooled by the title because there is no stripping going on.” Ian Jane, over at the Rock Shock Pop website suggests, “Strip Nude For Your Killer […] rests somewhere approximating the bottom of the barrel… The plot seems to exist for the sole reason of stringing along the voyeuristic viewer bold enough to sit down [while] the film moves from one naked dead corpse to the next.”

So why should you devote your time to this mundane genre effort? Because it stars Edwige Fenech, that’s why. (Sigh) 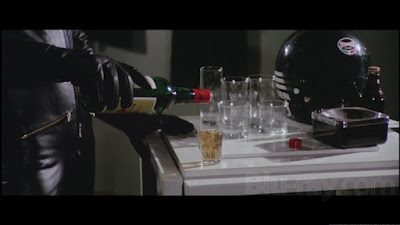 Arrow Video has done their usual bang-up job with the restoration and extras. One featurette on the new Blu-ray is a career overview of Edwige Fenech by Kat Ellinger, which is well researched, thoughtful, and entertaining. That featurette alone is worth the price of the disc. Hey! Maybe we should all just buy the disc for the SHORT DOCUMENTARY and consider the FEATURE to be the BONUS?

Stranger things have been suggested. In retrospect, I only wish that I had watched these films in the reverse order. After Strip Nude for your Killer, I could have used some cheering up courtesy of the Fab Four.
Posted by Patrick Bromley at 5:00 AM