Stream or do not stream. There is no try. 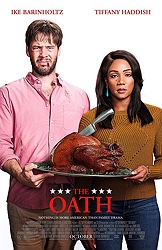 The Oath (2018, dir. Ike Barinholtz) This political comedy, the first feature directed by comedian/writer/star Barinholtz, seemed to barely received a theatrical release last year -- it came and went without so much as a whimper. It's too bad, because while the movie isn't always as focused or sharp as I would hope, it definitely has something on its mind about our current climate. Barinholtz and Tiffany Haddish play a married couple forced to reckon with family during a Thanksgiving weekend in which all Americans are expected to sign a loyalty oath to the current administration. The movie takes a number of dark turns away from comedy, making it difficult to pin down exactly what kind of a film it is. On first viewing, that took some getting used to. In retrospect, I'll take a movie that's more than one thing any day, even when it doesn't always hit the mark. (Watch on Hulu) 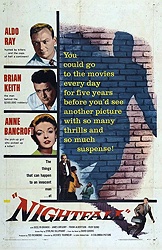 Nightfall (1957, dir. Jacques Tourneur) The Criterion Channel's "Columbia Noir" series is pretty excellent and has provided a handful of new discoveries for Erika and me, like this gem starring Aldo Ray as a guy who runs afoul of some bank robbers and Anne Bancroft as the woman who decides to help him out. Jacques Tourneur's direction is characteristically beautiful and moody, and the cast is great across the board. Bonus points for the gruesome climax. (Watch on Criterion Channel) 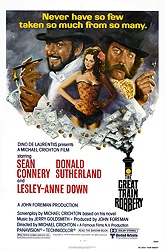 The Great Train Robbery (1979, dir. Michael Crichton) Another fun discovery for this year was Erika and I watching The Great Train Robbery, a charming heist movie with Sean Connery and Donald Sutherland. I don't normally associate Michael Crichton with "pleasant, airy fun," but that's exactly what this movie is. There's a really cool sequence near the end with Sean Connery performing some impressive stunts and a great gag with Donald Sutherland playing a dead person. It's the kind of movie I miss being made. (Watch on Amazon Prime Video) 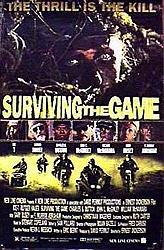 Surviving the Game (1994, dir. Ernest K. Dickerson) This movie rules. This movie is insane. This movie is an Ernest Dickerson-directed remake of The Most Dangerous Game but starring every 1990s action movie character actor -- John C. McGinley, Rutger Hauer, Charles S. Dutton, Gary Busey, F. Murray Abraham -- trying to hunt and kill Ice-T. That sound you just heard? It's the sound of you clicking "play." (Watch free with ads on Vudu)
Posted by Patrick Bromley at 5:00 AM