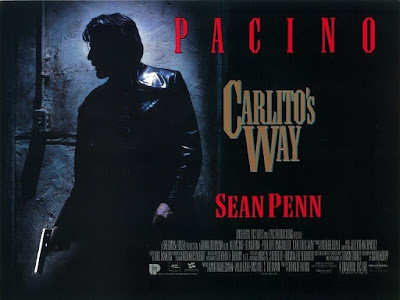 The review duo who showed Benny Blanco some love.

Rob: Our All Pacino series continues with Carlito’s Way, the 1993 gangster thriller that reunites Pacino with his Scarface director, Brian De Palma. Based on the novels Carlito’s Way and After Hours by Judge Edwin Torres, the film features Pacino as Carlito Brigante, a hitman who vows to go straight after serving five years in prison. Upon returning to the old neighborhood — and old friends like Pachanga (Luis Guzman) and Guajiro (John Augstin Ortiz) —Carlito quickly finds himself right back in the mix. All Carlito wants is One Last Score and a chance to take his girl Gail (Penelope Ann Miller) to a far-off paradise where they’ll never be found. But gangsters like Saso (Jorge Porcel) and Tony T (Frank Minucci) have other plans, and Carlito’s lawyer/best friend Kleinfeld (Sean Penn) is far too deep into cocaine and corruption to be left unsupervised.

This was my third or fourth viewing of Carlito’s Way, and while I’ve never counted it among my favorite De Palma films or my favorite Pacino performances, it remains a decent mid-level gangster staple that embraces its genre roots without necessarily doing anything to reinvent them. It’s one-note at times, a little bland and a little bloated. Pacino doesn’t get to do a whole lot with the character (though I’m sure we’ll talk about the choice to include film noir-style voiceover), but there’s enough texture around him to keep things interesting. I’m actually not too sure of where to start our discussion with this one, Adam. What did you think of Carlito’s Way? 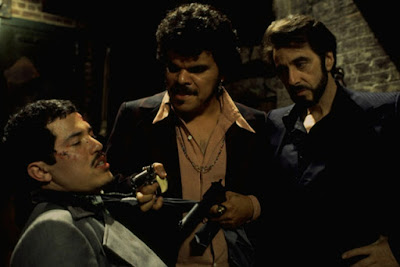 Adam: I love it. Among Brian De Palma’s filmography it’s in my top five along with (in no particular order) Phantom of the Paradise, Carrie, Blow Out, and The Untouchables. What I like most about Carlito’s Way is how sneakily emotional it is as a story. There’s no reason the audience should be pulling for and especially sad for Carlito Brigante, but the combination of De Palma’s choices (especially music) and Al Pacino’s sullen/vulnerable performance really elevate the movie. The wild card that takes the film from good to great is Sean Penn’s performance as the devil on Carlito’s rehabilitated shoulder. It’s crazy in a good way. There’s an element of danger and anticipation whenever Penn’s on screen. Carlito’s Way is a movie that De Palma was born to make (that Grand Central Station climax!) and I think it’s underrated when we’re talking about both his and Pacino’s filmography. We haven’t reviewed it yet, but Carlito’s Way could have very easily been Scarface 2, and I admire that it’s a completely different look at a crime film from the same collaborators. I even prefer this movie to Scarface despite the latter’s notoriety. What did you think of the romance between Pacino and Penelope Ann Miller? I take it the voiceover wasn’t you cup of tea, is that correct?

Rob: I also prefer this to Scarface, and I don’t want to give off the impression that I don’t enjoy it. I agree that this is right in De Palma’s wheelhouse and that Penn’s performance creates an interesting contrast. I’m not 100% sure how I feel about the voiceover, honestly. I’m not one of those people who rejects the technique wholesale, but there are moments when Carlito is so quietly intuitive in his actions — such as in my favorite scene, the early poolhall ambush — that I kept asking myself how useful they were when Pacino’s performance could communicate so much already. They were mostly boilerplate gangster soliloquies that highlight a theme or plot detail we’re already cognizant of (compare this with the voice over Goodfellas or classic noirs where the narration is shedding light on what the protagonist is planning on doing or the rationale behind their decisions). I just wanted a little more from them, I think. 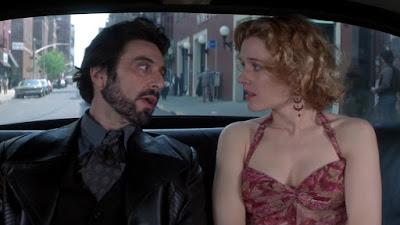 Penelope Ann Miller is a good actor, and I like the romance plot, but after seeing really nuanced and dynamic relationships in Pacino films like Frankie & Johnny, I admit I was a little underwhelmed. Then again, I get it. Just like his Caribbean retirement, Gail is a dream for Carlito. She’s more aspirational object than three-dimensional character, and I understand that. It fits the film’s themes. She’s a goal he’ll never quite reach (figuratively and, later, literally). I would have just liked to have seen her equal need for escape and redefinition given a little more play.

See, though, I think I’m just being too picky. The real romance is with Kleinfeld, after all (lampshaded in an early bar scene by two ladies feeling ignored by the pair of old friends), so what do I want? It’s a lovingly textured and heartbreaking relationship. But a major aspect of Carlito’s arc seemed to be the way the street — the thing he can’t escape — has moved past him. That’s the whole Leguizamo character, right? And Penn’s inevitable corruption by drugs and power? But Carlito sees his own demise coming a mile away. What deficiencies in style or tactic really led to his undoing?

Honestly, I sound like I enjoy this film a whole lot less than I do. It’s entirely possible that this is just me judging the film by what I wanted, rather than accepting it for what it is. I’m just trying to decide what makes Carlito’s Way stand out, and except for Penn and Pacino’s excellent hairstyle choices, I’m coming up short.

What are some of De Palma’s hallmark stylistic choices that really worked for you here? 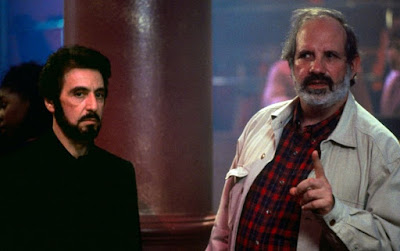 Adam: Oh boy. That’s a good question. The two I like best are his use of Steadicam, which works wonders in the climax as the camera is running alongside both Carlito and the Italian mobsters who are trying to kill him. It works so much better than in most other films, which would cut around in such a scene. The other one (and this will sound silly) is that every actor and actress, through makeup and costuming (except for Penelope Ann Miller and the great character actor James Rebhorn), look like they’ve killed 15 people in their lifetime. I think it really works in the context of the movie because Carlito feels that way throughout the film -- any person could take him out over any slight. It’s a world with nothing but one fish trying to devour a bigger fish.

Carlito's Way features an amazingly deep cast of supporting players, some of whom were just starting out their film careers. I want to take the time praise John Leguizamo, who’s an actor I didn’t appreciate enough until just recently. He’s so fantastic shifting motivations and temperament within the beats of a scene. When I see him in this or Summer of Sam, it makes me want to go back and watch more of his dramatic work.

What did you think of the framing device for the film? You mentioned earlier that it feels (along with the voiceover) very noir-ish. At first, I didn’t think it was necessary to tip the audience off to where the movie was going to wind up, but on second thought I think it’s maybe the only reason we’re pre-set to sympathize with Carlito and not see him as Tony Montana 2.0. 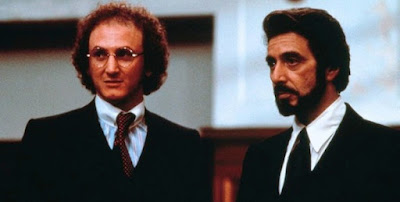 Rob: Totally agree. This isn’t a street soldier who’s going out guns blazing. This is a wise and repentant man trying to make amends. I think the opening credits foreshadow that somber tone in an important way. I asked the question about De Palma’s style because I felt at times like it was one of his safer projects and that I could have used a little more stylistic weirdness. But then again, that could have been distracting. I’m so conflicted!

I just wanted to mention really quick that you and I were joking about wanting to see the film where Carlito runs an island car rental place. Maybe Annette Bening’s character from Danny Collins opens a hotel nearby? They don’t have to get together. I just want to see Pacino swing by occasionally to spit some game her way. Better than Shawshank, if you ask me.

Adam: I want to ask you about a controversial topic, but I don’t want to make a big deal about it. Does it bother you that an Italian actor like Pacino is playing a Puerto Rican character in this movie? Is it inherently wrong to cast this way, or does it depend on the performance (i.e. if the acting isn’t offensive, then it’s not offensive)? I normally wouldn’t get too upset about it (e.g. non-Jewish actors play Jewish people and it doesn’t bother me), but when you see a scene with Pacino and Viggo Mortensen playing two Puerto Rican men...I don’t know. It feels odd.

Rob: It’s an important discussion to have, and while Scarface obviously sets a precedent for Pacino, it’s hard not to wonder if a Puerto Rican actor would have been a better choice. Representation is important, for sure. Casting isn’t (and likely won’t ever be) the meritocracy is should be, but in a perfect world, acting is acting. Anyone should be able to play anyone. And while I’m certainly not offended by Carlito’s Way as an Italian, mine’s not the culture being portrayed. So, can I really answer that? I think the best I can do is to say that I want to see more actors playing more characters of all stripes. That’s a little safe, I guess. But it’s the best I can do. 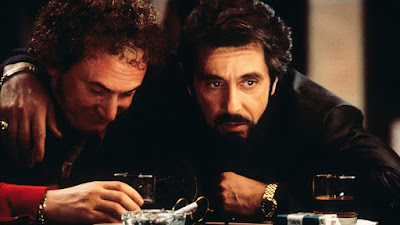 Adam: Yeah, sorry to put you on the spot. It’s so glaring in this case that I felt like we should mention it. One last question before we wrap: there’s a direct-to-video prequel called Carlito’s Way: Rise to Power, starring Jay Hernandez as Carlito. How much would I need to pay you to watch that movie?

Rob: Zero! Anything for you, bud. Just promise that you’ll co-own a beachside car rental shop with me if I ever make the move. I’m Mark Ahn for Carlito’s Way, despite a few misgivings. What are we talking about next week?

Adam: As someone who once interned at Enterprise-Rent-A-Car, I feel qualified to co-own a beachside car rental location with you. I get to be the guy who says “We’ll pick you up” to people tanning poolside. Mark Ahn from me too. Next week is TBD. Until next time...