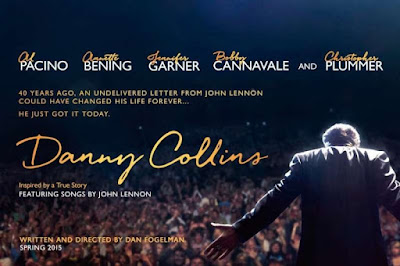 The review duo who haven’t had a hit in 30 years.

Adam: This month’s entry in our ongoing Al Pacino retrospective is his 2015 dramedy, Danny Collins. The film was written and directed by Dan Fogelman (screenwriter of films such as Cars, Crazy, Stupid, Love and the underrated The Guilt Trip) and came just before he hit a career high-point as creator and executive producer of the TV drama This is Us. Danny Collins stars Pacino as the titular Neil Diamond-esque singer who once was a Bob Dylan-type singer-songwriter before selling out to become more rich, famous, and mainstream. Now an aging front man with substance abuse problems, Collins learns from his friend and manager (Christopher Plummer) that John Lennon once wrote Collins a letter with words of encouragement and Lennon’s phone number (to call for advice) that Collins never received. This knocks him off his axis, so he decides to retreat from his L.A. mansion to a suite at a Hilton in suburban New Jersey to reconnect to his artist roots and for other motivations (which we learn later). The film co-stars Annette Bening, Josh Peck, and Melissa Benoist as employees at the hotel, and Jennifer Garner and Bobby Cannavale as Collins’ long-estranged daughter-in-law and son.

This was my second viewing of Danny Collins. I saw it in theaters and reviewed it here on the site. Going back to the review really blew my mind for a couple of reasons: 1) I like the movie a lot more now than I did four years ago and 2) I watched movies very differently back then. I might be going through that Roger Ebert phase he had in the 2000s where he went easier on everything. I can barely get through re-reading my own 2015 review to be honest. It feels like it was written by a different, more persnickety person. 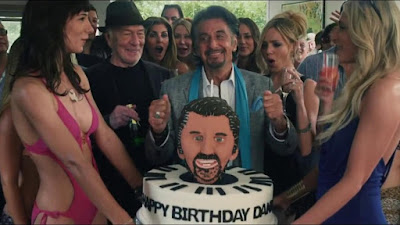 Anyways, back to the movie itself. It’s cliched in a lot of ways, but I thought some scenes were really disarming and terrific. I especially loved Pacino checking into the hotel. In that scene, he really amps up the charm of his persona as both Danny Collins and Al Pacino and it’s glorious. It’s catnip to Pacino super fans like you and me. Also, (I won’t spoil it), but the last scene is really moving to me. I didn’t remember much about Danny Collins before revisiting it this week, but I have had that final scene in my head occasionally since I saw it four years ago. That’s odd to me because I had such a problem with it in my earlier review.

This is an “Isn’t it nice?” movie. What I mean is I like most of the cast and “Isn’t it nice to see them have space to act and remind you why you like their work?” What did you think of the movie, Rob? Do you want that Al Pacino birthday cake from the beginning as much as I do?

Rob: I have to say I was surprised reading your review as well, because Danny Collins struck me as an Adam Riske movie of the highest order. It’s light and effortless, full of charm and honest tugs on the heartstrings. It knows its genre and plays with convention when it gets the chance. It suggests complexity of character without beating you over the head with the tropes, instead allowing (as you mentioned) for the actors the live and breathe in their parts in a more naturalistic way. It’s so Movie. Is it necessarily great? Probably not. I joked to you offline that, while I wasn’t sure if I liked Danny Collins, it may also be the only movie I ever want to watch ever again. It’s just such a pleasant world to live in.

And you weren’t kidding about this being All Pacino catnip. He’s clearly having so much goddamn fun that it’s hard to tell where he ends and Collins begins. This is Tony Stark-level actor assimilation, and the best part is that none of it is super performative. It’s not a Scarface or Heat-type role. Al isn’t rubber-facing it or putting on an accent. He’s not pitching into extreme highs or lows. He’s just being Al, dancing around behind the bar and tossing limes into drinks like an old pro. All that patter between him and Christopher Plummer? I hope that’s how you and I are when we’re in our late seventies. I almost cheered when Al brags that his latest lady (Bening) is finally age-appropriate and Plummer replies, “Not really.” I love those throwaway moments. That and the little scene where Pacino and Cannavale are arguing about chicken soup. So good.

I was thinking a bit about the ways the film uses the framed John Lennon letter both as a simple narrative prop and as a kind of symbol of Collins’ failed potential. There are times where that gets obnoxious (doing coke lines off of it during his late-movie dip back into self destruction, for example), but I have to applaud the film for not driving that “storyline” (such as it is) into the ground. It’s there to serve as a suggestion of Collins’ best self, but there’s no mystery attached to it. We’re not searching for anything or coming to any revelations about what it really means. It’s simply a motivational tool that allows Collins to take risks and shift, fully-formed, into a new phase of his life. This could also be interpreted as a sign of the film’s limited ambition — its unwillingness to say anything “real” about celebrity or the creative arts — but I’d disagree that Danny Collins is about any of that to begin with.

Adam: Your Robert Downey Jr. as Tony Stark comparison is terrific. And yes, when we’re in our seventies, I’ll talk to your son about what a great guy you are because you send me cases of bottled water without a hitch. (Readers - this will only make sense if you watched Danny Collins very recently). I was so pumped to see Pacino and Plummer back together on-screen (The Insider reunion!). These dudes are such pros. 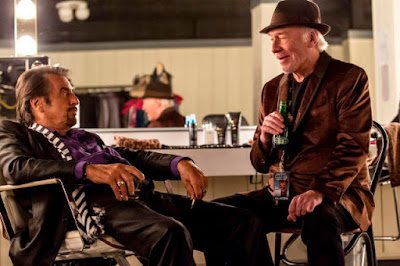 I honestly forgot about the John Lennon letter subplot most of the time. It’s not essential to the story, really, other than to set it in motion. It’s a little weird that the filmmakers would specifically make it John Lennon and presumably pay a good amount of money to his estate for song rights and then have zip to say about John Lennon or even Danny Collins in relation to Lennon after the opening scene. The part that stood out to me most in Danny Collins was Pacino’s relationships with Bobby Cannavale (who can literally do no wrong) and Jennifer Garner. There’s so much that I like about their scenes together, especially Pacino walking around with a notepad when he’s at Cannavale-Garner’s daughter’s school interview or Cannavale’s doctor appointments. That was my favorite Pacino flourish in the film; a close second being him calling that one dude “Busy Work.” It reminded me of the one joke I like in Jack & Jill where Al will only call Adam Sandler “Popcorn.” It’s so dumb and I love it.

What did you think about the relapse moment Danny Collins has late in the film? It seemed arbitrary; like the film felt it had to include it. It makes no sense to me that an artist whose performed for as many decades as Danny Collins wouldn’t just start his set by saying “We’re gonna get to the hits, but I have a few new ones first. I hope you like them.” Instead he panics, goes straight into a “Sweet Caroline” (I mean “Hey, Baby Doll”) tailspin almost immediately and the next time we see him he’s snorting Tony Montana levels of coke. Also, how did Danny Collins get up to three Greatest Hits albums when he only sings one song? I get that Pacino can’t sing and the film does a mensch’s job trying to mask it but c’mon, man! Three Greatest Hits albums is Madonna level of success. Am I going crazy?

Rob: A quick Google shows artists like Johnny Cash and Kiss with at least three, while Michael Jackson seems to top the list with eight. I’m sure there are others, but yes, that is an insane level of success for someone who claims to have not written a song in thirty years. And I totally agree that his relapse seems super perfunctory and screenwriter-y when there are so many other genuine complications that could have arisen from his hesitation to by vulnerable in front of a audience. His ex-fiancée and Busy Work just magically show up in New Jersey with a bag of cocaine? Why would he even invite them to the show? The “money troubles” thing feels cheap, too. He genuinely seems to want to sing again, so why is going back on tour all about making money when he’s finally rediscovered his spirit as an artist? Make it about that!

Anyway, none of this takes away from my enjoyment of Danny Collins’ quirks and charms (Side note: Remember Jennifer Garner’s off the cuff “Oh, fuck me” when she sees Collins at her door? Man, she is so good). My question to you is this: If you wrote a pop hit for Al to sing, what would it be called? Mine would be called “Buttermilk Biscuits.” I don’t know why; it just seems like a phrase that Al would enjoy singing.

Adam: Haha, what? “Buttermilk Biscuits?” That’s funny. Al song? Hmmmm. A cover of “I Heard A Rumor” by Bananarama. Just because I want him to speak-sing the title like when he was in Two for the Money and said, “You’re a MUTANT!”

I think this column is only for us at this point. Sorry everyone else.

1. How long do you think Josh Peck and Melissa Benoist dated in the world of this movie? Were they a couple meant to last? Don’t you want to sing to her because she’s so adorable? I do. I would sing “Wouldn’t It Be Nice?” by The Beach Boys but I would change it to “Wouldn’t It Benoist?” I wonder why I’m single sometimes. This isn’t one of them.

2. I don’t usually love Annette Bening, but isn’t she good in this? I really enjoyed her scenes with Pacino. I feel like she knows how to handle these ‘70s rapscallions because she’s married to Dick Tracy (Bening: “Danny Collins, don’t you think you’ve drunk enough? Al: “I’m BIG BOY CAPRICE!” Director: “Cut!”). I love when she shows Danny Collins a picture of her daughter and he goes “Oh yeah” and she quips “Well, don’t say it like that.” 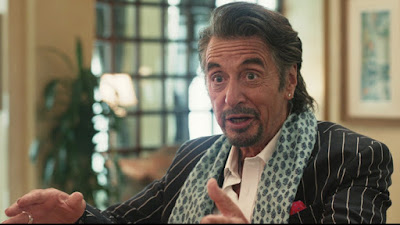 Rob:
1. I wrote almost an entire paragraph about how I wanted a separate movie with Peck and Benoist telling their kids Danny Collins stories. I cut it because I thought this column might be for other people, but I’m glad it ended up being just for us. My hope is that they go the distance. She is just the cutest. She’s definitely the kind of hotel clerk who will give you a late checkout if you ask nicely.

2. Everyone is good in this movie. Pacino makes everyone comfortable and allows them to do their best work. Every producer and executive in Hollywood having script issues on a project needs to consider just writing Danny Collins into the movie. Is Pacino in enough of a “fuck it” phase that he’ll do half a day on anything? Maybe not, but it’s worth a shot.

That’s a big Mark Ahn for Danny Collins. What are we doing next week?

Adam: Mark Ahn for me too. Next week is March Discoveries, new-to-us movies we really enjoyed. Until next time…