Redboxing: THE MAN WHO KILLED HITLER AND THEN BIGFOOT

Spoiler: The man is Sam Elliott.

There are two kinds of people in the world: Those who hear the title The Man Who Killed Hitler and Then The Bigfoot and roll their eyes, and those who hear that same title and cancel their plans. It will surprise exactly none of you (those who have been following Redboxing for some time, at least) that I’m of the latter disposition. Read that title again: The Man Who Killed Hitler and Then The Bigfoot. Savor it. There’s a boldness to it, an ironic awkwardness to the syntax that nods to the best in exploitation and black comedy. It evokes visions of over-the-top action and subpar visual effects. Funny mustaches. Speaking of which, seeing Sam Elliott’s name in the credits as the titular Man brings the picture into even clearer focus. Elliott is a symbol of rugged Americana, a gruff and avuncular figure of sage wisdom and no-bullshit swagger. Think carefully: Who else would you really trust to hunt down the world’s most notorious genocidal maniac AND North America’s most storied folk legend? 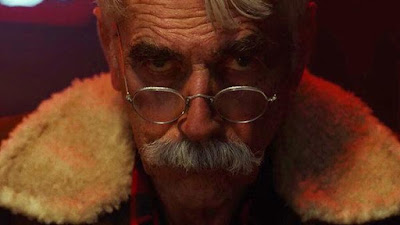 But while it does digress briefly into schlocky action madness, The Man Who Killed Hitler and Then The Bigfoot isn’t the gore-tactular extravaganza many of us were expecting. Instead, it’s a quiet and meditative character study on loss, regret, and the precarious fragility of human connections. Elliott plays Calvin Barr, an aging veteran of secret and unspeakable wars. Though his present life is a simple one — dog walks, haircuts, and TV dinners — the dirty deeds of his past haunt him. It seems that as a young man (played in flashbacks by Aiden Turner), Barr spent months stalking the war-torn German countryside in search of the one true Adolf Hitler. There were many doubles, Barr later recounts, including the famous one who committed suicide in his bunker as Russian forces closed in. But Barr found the real Hitler and put a bullet in his brain on behalf of the good old U.S. of A. That single act of heroism cost him everything, though, namely Maxine (Caitlin Fitzgerald) and the life they hoped to share.

Barr has spent the intervening years in quiet isolation (his brother Ed — played by the reliable Larry Miller — admits that never knew each other “as brothers should”), and he seems content to drift defiantly into That Good Night until FBI and RCMP agents (Ron Livingston and Rizwan Manji, respectively) arrive on his doorstep to damage his calm. It seems that a recent outbreak of deadly Canadian influenza is no innocent happenstance; it’s actually the work of the legendary Bigfoot. He’s roving the wild countryside and will soon — if Barr refuses to stop him, that is — infect the entire continent. It should be noted that this, ostensibly the film’s inciting incident, occurs about forty minutes into its ninety-seven minute running time. It’s certainly fun to see Elliott creeping through the brush with a rifle, but a plotline that takes up half the film’s title ends up little more than an odd digression. It seems to exist only to give us one great moment: Elliott, choosing his gear from a wall of deadly weapons, grunts, “That scope. On that gun. With this knife. Nothing else.” It’s even punctuated with a snap zoom. It’s so good.

Anyway. Look carefully under the surface and you’ll find that The Man Who Killed Hitler and Then The Bigfoot (it’s so fun to type!) is really a story about the importance of deflating the bloated legends that serve only to distract us from our shared human experience. “I killed one man,” Barr tells the G-Men over coffee, “but it was other heroes who won the war.” A frustrated Barr would eventually learn that the real danger wasn’t the man called Adolf Hitler. It was the repulsive ideology that long outlived him, spreading like a — you guessed it — deadly illness and causing far more permanent damage than one person could ever hope to inflict. Barr’s was an act of ultimate sacrifice and supreme patriotic valor, but as Maxine died long before he was able to return home from the front, it did little except rob him of his future. It’s a heartbreaking moment made even more poignant when Barr apologizes to the wounded Bigfoot before putting one between his eyes: “I didn’t want it to be this way.” 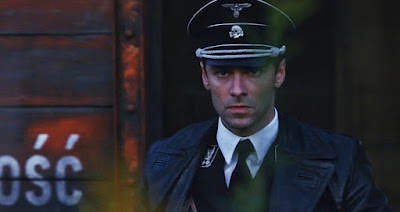 The Man Who Killed Hitler and Then The Bigfoot is not an important film, but first-time writer/director Robert D. Krzykowski could very well develop into an important voice. It’s all a bit rough around the edges — the writing is stilted and abrupt in some places, meandering and overly verbose in others — but there’s no denying that Krzykowski has an eye for the honest moment. He understands when and how to let Elliott feel out the space so he can take over a scene. He understands the importance of deafening silences and still, empty frames. The final result is more workman than visionary, mind you, but it’s laudable when you remember that the film ends up conscientiously subverting the expectations born of its preposterous title: This is the man who killed Hitler and then the Bigfoot. Neither event was loud or legendary. He did not ride home on a tie-dyed Tyrannosaurus Rex or sleep next to supermodels on a bed of thousand dollar bills. Between those two events lay silence and reflection. Oh, and a big, ol’ mustache.
Posted by Patrick Bromley at 5:00 AM

Email ThisBlogThis!Share to TwitterShare to FacebookShare to Pinterest
Labels: 2018 movies, redboxing, sam elliott, the man who killed hitler and then bigfoot