I am getting spoiled—SPOILED, I TELL YOU—by the fine products that Shout! Factory keeps putting out.

The specific object of my movie love has always been Universal Horror Films of the 1930s and ’40s. I must admit that I had always pooh-poohed Universal’s lower budget Sci-Fi efforts of the 1950s, even though that was the era (era) that gave birth to my beloved Creature From The Black Lagoon. Shout! Factory has been releasing these later efforts in small handfuls over the last couple of months, and these discs have featured both tasty special features and revelatory new transfers. February’s The Mole People disc turned out to be a delicious hors d’oeuvre, preparing our appetites for the multiple courses to come. The Deadly Mantis arrived in March; now we have Tarantula!, released in April; Monolith Monsters and Monster on Campus will be released in June; This Island Earth follows in July; The Leech Woman in August; and who knows what is next? This is an embarrassment of riches!

But today, my children, we will be talking about a fun little romp about arachnids and pituitary disorders called Tarantula! 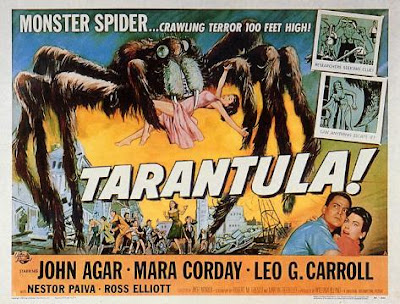 The Plot in Brief: Prof. Gerald Deemer (Leo G. Carroll, over a barrel) is developing a radioactive super food designed to one day feed a hungry and grateful world. The food makes animals grow to enormous, delicious sizes; unfortunately it also afflicts humans with a form of acromegaly, which swells and distorts the victims’ faces and bodies.

After one of Prof. Deemer’s scientist cohorts is found dead of acromegaly, Matt Hastings (John Agar), a local medical doctor, is called in to consult on the case. Deemer takes an instant dislike to the affable Hastings. Stephanie “Steve” Clayton (Mara Corday) arrives by bus to assist Deemer with his experiments. Deemer seems very gruff and secretive. What does he have to hide? Why doesn’t he just tell everyone that he’s working to solve the problem of world hunger? Why do Deemer’s facial features seem to be changing? Wait, where did that enormous spider from Deemer’s lab go? 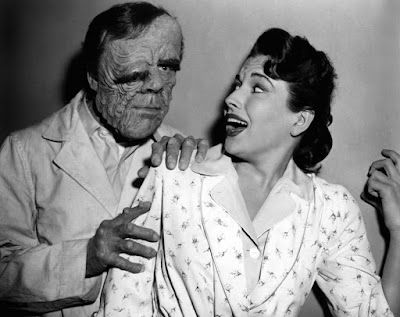 Tarantula! came into being for two reasons: 1) Universal Studios producer William Alland was on a roll in the early 1950s, producing the low budget It Came From Outer Space and Creature from the Black Lagoon, which were both cash-cows for the studio; and 2) Warner Brothers had scored an even bigger success the previous year with its giant ant film, Them! This film was the direct inspiration for Tarantula!, right down to the breathless exclamation point in its title.

Side note: Can we all just admit that film historian Tom Weaver is a goddamned national treasure? Weaver hands in another of his A+ audio commentaries on the Tarantula! disc—with assistance from actors Larry Blamire and Jennifer Blaire, who “voice” Weaver’s interview snippets. Monstrous Movie Music’s David Schecter shows up to comment on the film’s patchwork score, and Dr. Robert Kiss joins the party to comment on the logistics and earnings of the film’s original release. I learn so much from Weaver’s commentaries; they are models of the form.

Tom Weaver, of course, was one of the original horror historians who did not rely on promotional studio press releases or Forrest J. Ackerman’s entertaining bullshittery in the pages of Famous Monsters of Filmland—Weaver wrote his books by actually interviewing the people who were there and doing laborious research in the original studio archives. Meeting Weaver at the Monster Bash convention in 2016 was a highlight of my year. I am afraid that I probably came off like an embarrassing fanboy, babbling like an idiot as I produced book after book for him to sign. (In the photo below, Weaver is on the left, pictured with fellow horror historian Greg Mank, who was also forced to smile at my awkwardness and sign many books.) 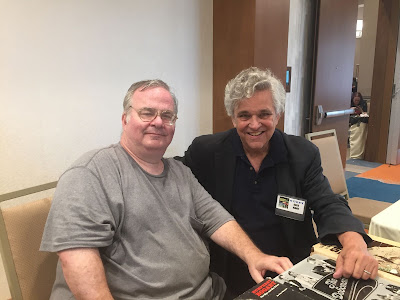 The image on the new Shout! Factory Blu-ray of Tarantula! is stunning. The only downside is that when the film occasionally uses stock footage (yes, I am looking at YOU, hopping desert rabbit that John Agar and Mara Corday briefly chuckle over!) it is even more glaringly obvious. The picture is rock steady and debris- and scratch-free. I remember watching this film during my misspent youth on Chicago’s then hard-to-tune UHF station WFLD. That version looked like it was filmed though a cloudy fish tank, compared to the new Shout! Factory disc. 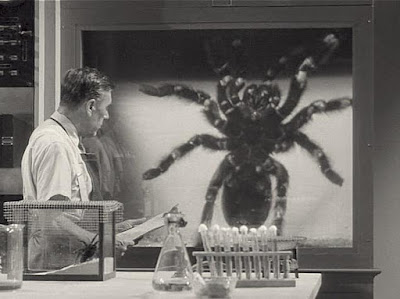 With June right around the corner, it’s my pleasure to point out that this film fits right into your Junesploitation plans in so many ways. First, it is a textbook exploitation film, meant specifically to exploit the immense success of Warner Brothers’ giant ant film, Them!, from 1954. Second, when it comes to filling in your Junesploitation Bingo Card, this film is VERSATILE—viewers can use it: 1) on June 3rd, because I think that a spider the size of a house qualifies as a MONSTER; 2) on June 4th as a sort of demented WESTERN, because half the film takes place in the desert, half of the musical score is cribbed from old Universal Westerns, and the film even features sheriffs and cowboy hats—just imagine that the monolithic spider is a gigantic Texas Longhorn!; 3) on June 12th, because the film is actually a REMAKE of an episode of the Science Fiction Theater television series titled “No Food For Thought;” 4) on June 15th for SCI-FI, obviously; and 5) on June 28th for REVENGE, as the film’s titular spider wreaks havoc on the town and its people, seeking to kill the very scientific establishment that made him A FREAK and any man, woman, or child who has ever purchased RAID. Throw in the four FREE DAYS, and that’s NINE days. I’m telling you, Tarantula! is the Swiss Army Knife of Junesploitation!

If only Lucio Fulci had directed the god-dammed thing.