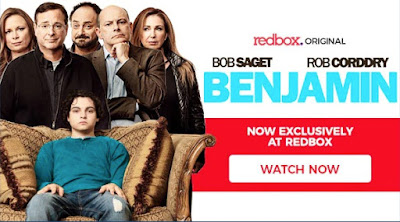 You had me at “Redbox Original.”

I consider it a personal insult that I wasn’t notified about Bob Saget’s Benjamin, the first in what will hopefully be a long line of films distributed by Redbox Originals. Okay, so, “Original” might be an overstatement: According to Variety, Redbox has simply purchased a 90-day window of exclusivity on Benjamin rentals, the assumption being that it will be available on other streaming services after that date. But, still! Can I really be that angry? Look at Redbox go! They’ve got a logo card before the opening credits and everything! I mean, how can physical media be dead if my beloved discount DVD kiosk retailer is literally acquiring their own films? Films directed by the likes of Bob Saget! Disney+ had better watch the fuck out. Speaking of which: Has anyone actually used Redbox On Demand? I haven’t, and I’m Redbox’s only customer. 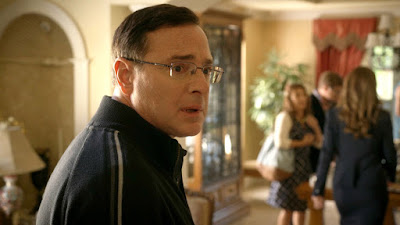 Anyway, Benjamin is a huge pile of shit. It’s not really a motion picture in the strictest sense, actually; it’s more like compiled behind-the-scenes footage of actors screwing around between takes on other movies. That, or Bob Saget invited a bunch of funny friends over to what I assume is his mansion — Benjamin’s one and only location — and told them to just cut loose with whatever they wanted. But it’s allegedly the story of Ed (Saget), a hobbling and nebbish businessman (?) who discovers that his son, the titular Benjamin (Max Burkholder) has become addicted to crystal meth. Already weakened by his wife’s recent abandonment, Ed enlists the help of friends and family (Rob Corddry, Kevin Pollak, Dave Foley, Cheri Oteri, Mary Lynn Rajskub, David Hull, Clara Mamet, Jonny Weston) in staging an intervention. But — twist — these “stable adults” actually have issues of their own.

Saget’s publicist says that Benjamin “tackles serious subject matter — our kids and the temptations and challenges they face...through the lens of a familiar cast of comedic actors who make the topic approachable and poignant.” This family intrigue kicks off during the first intervention scene, the one where Corddry’s Dr. Ed (yes, a different Ed) slowly chews food, picks his teeth, and wipes crumbs off his clothes in a medium wide shot. Hey, that’ll kill sixty seconds, right? What about when Dr. Ed tells Not Dr. Ed that he needs to “pretend to be someone else,” and Not Dr. Ed appears a few minutes later in an elaborate magician’s outfit?! He took the advice literally! However, the heartwarming poignancy really crescendos around the thirty-minute mark, when Pollak and Rajskub stand on the porch and fart at each other for — no bullshit — a solid minute and a half. Saget even caps it off by wandering over and announcing, “It smells over here!” Please clap. 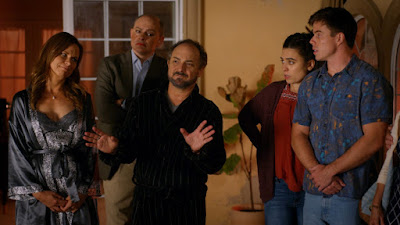 What else? Well, because things need to happen in movies, each of Ed’s compatriots has their own “gimmick”: His daughter Amber (Mamet) is a Female Millennial Twenty-Something archetype dating a gaslighting broheem named Tom (Weston). They have a lot of sex before he gets “triggered” and breaks up with her via text message. Those are words kids use, right? Their friend Ron (Hull) is so fixated on Tom that he spends one scene laying at his feet, prompting another character to point out that he is literally “a lapdog.” Thanks! It goes on: Corddry is in denial about his love of ladies’ makeup (he gets over it, hilariously). Foley and Oteri are Stepford-smiling kleptomaniacs. Pollak and Rajskub go to Bone Town in Ed’s bed. Oh! Ed’s wife Marley (Peri Gilpin) returns at the end with a oafish, leather-clad hockey player named Ulf (James Preston Rogers). Ulf barely speaks English! Can you imagine?

And look, I know it’s not like us at F This Movie! to dunk so hard on a little movie like Benjamin, and had it been produced by a young, upstart crew with a dream, I’d certainly be focusing on the positives rather than all the filth and garbage. I’m only taking the piss out of Bob Saget’s film because I’m familiar enough with his work to know that he can take it. I grew up with the guy. He knows as well as I do that Benjamin has what Adam Riske calls “a case of the fuckarounds.” He knows it’s an excuse to make some money and hang out with his friends. Hell, Adam Sandler does it, so why not? There’s also a reasonable chance that screenwriter Joshua Turek was onto something when he envisioned a scenario in which the person being intervened upon sits calmly as his supposed saviors project their hang-ups onto him. Benjamin even has a Silent Bob moment later on that could have been a nice payoff. If, you know, there was a set-up. 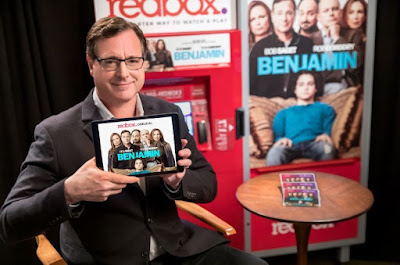 So, no. Don’t watch Benjamin. It’s not the worst movie I’ve ever seen (#TheLastFace #NeverForget), but I’m going to make an executive decision and say that Redbox Originals is better than this. Redbox Originals is better than Bob Saget and his bullshit. Redbox Originals should be reaching for the stars. They should be signing deals with Scorsese and Del Toro, like Netflix does. They should be taking risks on cool stuff like Suspiria (2018) or Paterson, the way Amazon Studios does. Have you seen The Handmaid’s Tale? Hulu cracked the code. Screw it, who says they can’t start their own Spider-Verse? Look, you get my point. If they don’t strike while the iron is hot, Redbox Originals could go the way of Crackle, SeeSo, or Yahoo! Screen. No one wants that. No one wants to be Yahoo! Screen.
Posted by Patrick Bromley at 12:00 PM