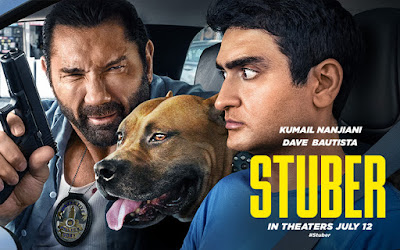 A 21st century action-comedy straight out of 1997.

More nostalgic audience members will find Stuber to be a comforting trip back to a time when high-concept star vehicles were the Hollywood norm. Whereas recent efforts like 21 Jump Street poked fun at the fading genre and The Hitman’s Bodyguard tried to reinvigorate it with a harder edge, Stuber is content to slap a new coat of paint on a familiar buddy comedy shell and call it a day. Despite its stellar cast, it’s a milquetoast throwback that — like its lead character — seems pretty damn happy to just be average. Absent a compelling story, it leans on the chemistry of its stars as they solve their interpersonal conflicts and lay the smackdown on some interchangeable bad guys. It’s copy-and-paste, paint-by-number. That might be exactly what you’re looking for, and that’s great! In an era (era) when many mid-level studio comedies are being banished to Netflix, something as innocuous as Stuber getting a theatrical release almost feels like a victory. 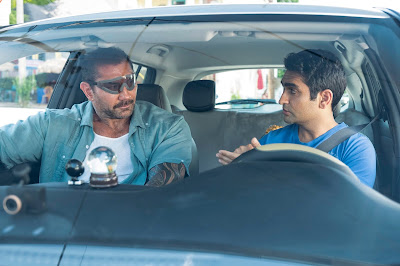 Dave Bautista stars as Vic, a Tough Guy Cop reeling from the brutal murder of his partner, Morris (a blink-and-you’ll-miss-her cameo by Bautista’s fellow Guardian, Karen Gillan). After the young officer’s death at the hands of local drug kingpin, Teijo (The Raid’s Iko Uwais), Vic has vowed revenge. Months without leads, however, have convinced Vic to finally take time off and get his much-needed laser eye surgery. But, twist! A break in the case reveals itself the very same day! Now, the blinded Vic must negotiate L.A.’s seedy underworld with the help of mild-mannered Uber driver, Stu (Kumail Nanjiani). Get it? Stuber? Anyway, Stu’s world — one already crowded by his hellish day job and preoccupation with Not So Platonic Friend, Becca (Betty Gilpin) — is turned upside-down by Vic’s relentless pursuit of justice. Will the unlikely pair become a team? Will Stu fall for Vic’s daughter, Nicole (Natalie Morales)? Will he earn his coveted five stars? Yes! It’s a movie!

Stuber feels like it can’t miss, right? A big, boorish cop with intimacy issues butting heads with a woke Millennial beta male? Vic teaches Stu to fight, while Stu teaches Vic to love! It’s a timeless Buddy Movie formula with a modern spin! And the truth is that it should work. Silicon Valley’s Nanjiani (who co-wrote and starred in the delightful The Big Sick) is a talented improvisor with a legitimate mainstream career in his future. Bautista is already a household name (Drax’s boisterous laugh from Guardians of the Galaxy makes an appearance here) whose natural charisma allows him to shift between tones and styles with ease. He’s a wonderful talent with a well-defined wheelhouse. Why, then, does Stuber end up so dry and disjointed? The fault could be in Tripper Clancy’s screenplay, which feels like it was written by six people who never read each other’s pages. Or it could be in Michael Dowse’s (Goon) clumsy direction, which renders Iko Uwais’ few opportunities to shine completely incoherent. 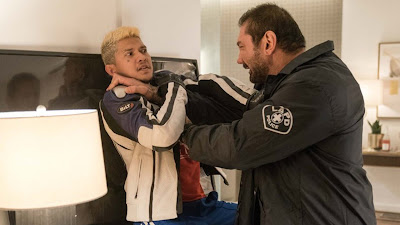 The more frustrating issue is that Stuber has things it wants to say about masculinity, family, relationships, self-esteem, the gig economy, L.A. culture, police corruption, neighborhood gentrification, spin class, etc., but it stutters through all of them without landing any one particular point. Variety is important, for sure, but Stuber’s sensibilities seem to be stuck between indie irreverence and mainstream appeal. It wants the anal sex joke and the big, tearful hug. It wants #MeToo awareness and casual homophobia. It’s a series of fits and starts that never gel. Nanjiani — seemingly given a ton of room to riff — tries desperately to make Stu more than a friend-zoned schlub who needs to assert himself, but he’s not given the latitude to develop a real character. Bautista shades his introverted bruiser with sincerity and humor (especially in his scenes with Morales), but he’s largely hamstrung by his narrative responsibilities. Like the film around them, the characters are a series of fun traits with no effective throughline. 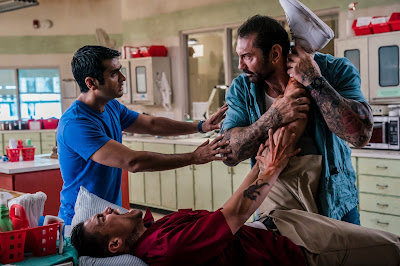 And so Stuber is no Midnight Run. It’s no Hot Fuzz. It’s no Collateral, either, though comparisons have already been made to Michael Mann’s L.A. thriller. No, Stuber is mostly a series of missed opportunities. The “Dave Bautista vs. Iko Uwais” movie would kick ass. The “Uber driver helps a blind cop around the city” movie would be funny. The “Kumail Nanjiani explains cultural appropriation and metaphysical philosophy” movie would get my money. Hell, the “man learns the difference between toxic co-dependence and romantic love” movie is something we would all probably benefit from right now. But Stuber can’t focus on any one of those things long enough to actually be any of them. It’s a bland retread that fails its talented cast. Mira Sorvino is in this movie, but her role is so forgettable that I nearly forgot to tell you! She’s like everything else in Stuber, a cinematic underachiever that never lives up to its potential.
Posted by Patrick Bromley at 12:00 PM