Reserved Seating: THE ART OF RACING IN THE RAIN 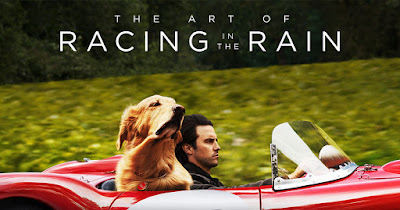 The review duo who hate that damn zebra plush.

Adam: This week we’re looking at The Art of Racing in the Rain, the new dog drama directed by Simon Curtis (My Week with Marilyn, Woman in Gold) and starring Milo Ventimiglia, Amanda Seyfried, Kathy Baker, Martin Donovan, Gary Cole, and Kevin Costner as the voice of Enzo the Dog. This was the reason I wanted to see this movie. It’s a dog with the inner monologue of my favorite actor (Kevin Costner) and he’s owned by my boy Milo Ventimiglia. Ventimiglia plays a race car driver of indeterminate success who adopts Enzo (Costner) when he’s just a puppy. The rest of the film follows Denny’s (Ventimiglia) career and life during the span of having Enzo, which includes meeting and marrying Eve (Amanda Seyfried), run-ins with the in-laws (Baker and Donovan), many races -- with shockingly no injuries -- and the expected trials and joys of dog ownership.

In the weeks preceding the film’s release, I was excited about The Art of Racing in the Rain, even dubbing it “Costner Dog” and “Fido Ventimiglia.” Then I saw the movie. While I was watching it (with Rob in person this time!), I was moved. The film worked as melodrama. In the days following, I’ve cooled on the movie. It’s basically an episode of This Is Us if they added a dog voiced by Kevin Costner. Also, movies are weird for me when I see them out of town. It’s like they don’t count, or we saw some specific New Jersey version of the movie. I can’t really explain it. It's exhausting being me. That’s probably why I empathize so much with Enzo.

What did you think of the movie, Rob? How was Costner? Why were you laughing so much at our screening?

Note for the readers: Rob laughed a lot. I was quiet most of the time. I totally understand why he was laughing. I just want to hear why in Rob’s words.

Rob: Please forgive me for the laughter. I could sense that I was the only one laughing, and I tried my best to stop, but too many ridiculous things were happening throughout Costner Dog for me to resist. Let me get there, though. To start, I largely agree with your assessment that it’s an effective melodrama (cute dog, family crises, tragedy porn) that lands somewhere on that Hallmark Channel level of quality. There isn’t anything particularly exciting or revolutionary about the story or its execution, but that doesn’t make it bad. It’s Applebee’s. People like Applebee’s. So, whatever. What had me in stitches were all the other layers on top: Costner’s gruff narrating voice (Was he doing an impression of what he thought an actual dog speaking English would sound like?), the awkward “thesaurus” writing of speeches obviously pulled right from Garth Stein’s novel, the fact that nearly everything Enzo says about Denny makes it sound like he wants to fuck him, and, of course, the stuffed zebra. I want to make all our readers aware that this is a Lifetime-level movie about perseverance through tragedy that also features a hallucination sequence in which a stuffed zebra laughs maniacally before ripping out its own stuffing and collapsing dead on the floor.

And, again, I absolutely respect that this movie affected you in the intended way. I have trouble with this kind of sentimentality because (as I think I’ve said before) I have no emotional attachment to dogs in movies. I know. I’m a monster. I get it. It’s just hard for me to get next to them as an emotional conduit. I find them too funny. As a result, I ended up spending a lot of time during Costner Dog — which, again, is a totally fine movie — imagining other Costner roles if they were played by dogs: A golden retriever hassling a rookie pitcher in Bull Durham. A pitbull going for Vontae Mack No Matter What in Draft Day. A big ol’ Dalmatian loosing a set of flaming arrows in Robin Hood: Prince of Thieves. I couldn’t stop my mind from drifting off between Costner Dog’s custody debates. And I know that’s not fair to the movie! Milo Ventimiglia and Amanda Seyfried are charming and earnest. There are beautiful cars that go very fast. Gary Cole shows up in a hat. It’s all fine. But I just couldn’t get away from the image of Kevin Costner recording all his narration over his iPhone on a Sunday afternoon.

None of this is a fair review of the movie, but you asked why I was laughing so much. Let’s move on to some of the bits that really worked for you. 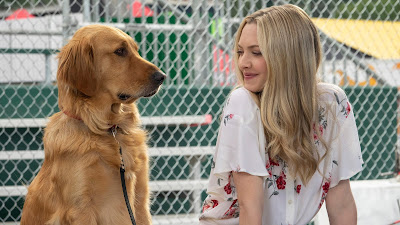 Adam: I’ll get into those in a moment. I agree with you though that the Costner voiceover for Enzo is bizarre. I also agree that Costner is totally trying to speak as a dog trying to understand “man” in specific dog cadences. That combined with his grizzled, smoker voice makes the movie unintentionally funny at times because the music of his voice doesn’t gel with the lyrics of what’s being said.

As far as what worked for me, it’s tough to say because the movie is manipulative. As I mentioned before, it worked for me in the moment but I’m very aware I was played by the filmmakers and they weren’t earning this emotion honestly. I like Ventimiglia and Seyfried because they’re sincere and some of the dog details are genuine and touching. The one lingering image I have from the movie is one that made me tear up during the film. It’s when Enzo takes the hat of one of his owners as a totem because he misses them and he’s sad. That’s very recognizable dog behavior and, as a dog lover, it choked me up. Most of the rest of the tearjerker details -- deaths, custody battles, babies, etc. -- are so mechanical that I can’t really praise them because they’re not surprising or inspired in any way. A movie like The Art of Racing in the Rain has a playbook to follow and this one follows it for sure. But should we be giving credit for connecting the dots? Also, I feel like the movie needed to mix it up more visually. Look at the pictures in this review. It’s the same photo over and over basically.

I don’t have much else to say about The Art of Racing in the Rain, so I’ll ask you a question about dog movies. If you had to pick your favorite, what would it be? My favorites are 101 Dalmatians (the animated one), Lady & The Tramp, Air Bud, and My Dog Skip.

Rob: Man, I’m the wrong person to ask. Best in Show? Homeward Bound? Turner and Hooch? It’s been too long since I’ve seen Cujo to know whether that one goes on the list. 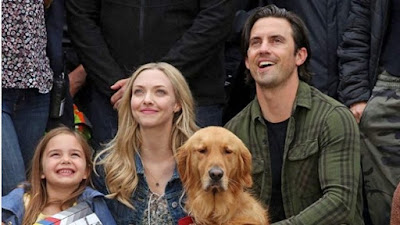 Adam: Cujo’s rough for me. It’s one of the few horror movies where I feel like a line has been crossed. That kid is terrified non-stop and it feels real. I’m a wuss. One last question: how do you feel about 2000s supporting actor Costner? Unlike some of his contemporaries who haven’t been able to step away from being a leading man and relegated to VOD fare (e.g. John Travolta, John Cusack, Nicolas Cage), Costner seemingly has consciously taken a step back and continued to work in a lot of theatrical films where he wasn’t the focus to sell the movie. It seems like a brilliant move in hindsight, but he’s been is some weird stuff too in the past 15 years. The Art of Racing in the Rain is maybe the strangest.

Rob: I haven’t seen everything he’s done in the last few years, but right now Costner seems to be getting the best of both worlds. He’ll do side parts in mainstream fare like Molly’s Game and Hidden Figures, and then lead in smaller projects like The Highwaymen or the totally insane Criminal. It’s almost as if he knows his wheelhouse is dads scrolling Netflix and has decided to act accordingly. He’s kind of retaining his integrity, if that sounds right? Nothing he does feels desperate. I can imagine him getting genuinely interested in the idea of voicing a dog, regardless of how it turns out. That said, I do wish he’d have a golden years career more like that of Kurt Russell. I guess what I’m saying is that I’d like to see Costner play Santa Claus.

Adam: I want Costner to direct more westerns and I would convert if he became Santa. It’s such a weird time in Hollywood for former leading (wo)men. It’s one of the parts of modern-day cinema that bums me out most. For example, Al Pacino should be in more movies, but what 2019 movies would you put him in? I guess my point is that they don’t make movies that deserve these actors anymore. Do you want to see Warren Beatty in Justice League? Or Jessica Lange in Uglydolls?

Rob: The movie star is dead. It’s all about serving the IP. Maybe Costner can play Professor Xavier in the Disney’s Marvel Studios reboot of the 20th Century Fox X-Men cinematic universe! That’ll get the kids watching Waterworld! Anyway, Mark Ahn on The Art of Racing in the Rain? I’m going to pass.

Adam: One of these days I need to take a stand, watch more movies from the past (I have a lot of blind spots pre-1987 outside of classics) and skip most of the new releases. This past decade of movies has aged me double. On that happy note, what are we reviewing next week?

Rob: Our All Pacino series returns as we look at 2014’s Manglehorn, which I hadn’t even heard of before Adam suggested it. Until next time…