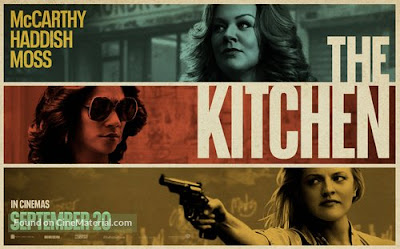 In which the ladies get theirs.

Written and directed by Andrea Berloff and based on the DC Vertigo comic book miniseries by Ollie Masters and Ming Doyle, The Kitchen is a ‘70s New York crime drama about a trio of mob wives (Melissa McCarthy, Tiffany Haddish, and Elisabeth Moss) who are left in the lurch by Hell’s Kitchen’s O’Carroll crime family after their husbands are arrested during an attempted robbery. Unable to live on the piddling allowance offered by boss Little Jackie (Myk Watford), the ladies decide to start making their own neighborhood collections, enlisting shell-shocked veteran and former O’Carroll soldier Gabriel O’Malley (Domhnall Gleeson) as an enforcer. As the ladies earn more and more territory (eventually squeezing out Little Jackie and O’Carroll matriarch Helen, played by Margo Martindale), they establish a partnership with Alfonso Coretti’s (Bill Camp) more powerful Brooklyn family. But when their husbands are unexpectedly released from prison and demand their cut of the action, the new bosses must band together to hold onto what they’ve earned.

First, the good: There are a number of things to celebrate in The Kitchen, not the least of which being that it’s a crime drama directed by a woman, written by a woman, and prominently starring women. It’s a poignant examination of patriarchal power structures and how they undermine the potential successes of capable leaders who just happen to be lacking in the bulge. It addresses those imbalances on the domestic front, as well, often illustrating just how incompetent these preening and posturing “male heads of household” actually are. It lets Kathy, Ruby, and Claire (McCarthy, Haddish, and Moss, respectively) be bosses and villains and heroes and lovers and mothers and murderers, and it portrays their emotions and vulnerabilities as assets in those pursuits, not disadvantages. Whenever possible, it seeks to humanize them. It rarely forces them to sacrifice any essential parts of their femininity in order to be successful, nor does it limit its definition of “a badass woman” to “a badass man doing badass man things, except with boobs.” 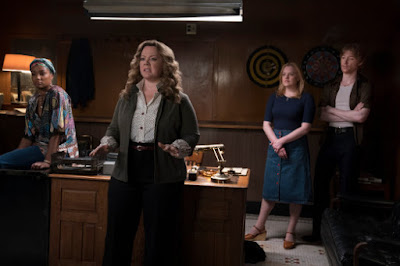 Despite these virtues, however, there’s a starchiness to The Kitchen that makes it feel like community theater Sopranos. Many of the actors look trapped under wigs, makeup, and varying attempts at New York accents. While there’s every reason to believe that Melissa McCarthy and Tiffany Haddish will have successful careers as dramatic actors (McCarthy already demonstrated that in last year’s Can You Ever Forgive Me?), neither looks all that comfortable in The Kitchen. Haddish is a true movie star, as charismatic a screen presence as anyone could ask for, but The Kitchen finds her still leaning on comedic acting tics and delivering would-be tough guy quips like her one-liners in Girl’s Trip. McCarthy’s performance is a bit stronger, but Kathy’s put-upon housewife-turned-boss arc needs more time to congeal. Even Elisabeth Moss (toward whom I am unapologetically biased after her role as Peggy Olson in Mad Men) is underused; she plays her domestic abuse survivor-turned-wild card killer so quietly and delicately that Claire ends up a bit lost in the background noise. There’s just a lack of interconnectivity among the trio that prevents us from really feeling their relationship and understanding who they are to each other. 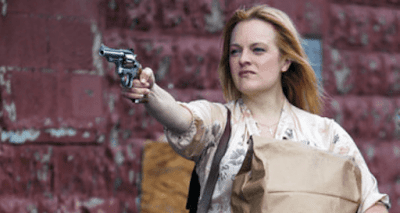 It’s not just the ladies, of course. The male characters are all stock goombah heavies, and even Common’s FBI Agent Silvers is stale and uninteresting. That’s part of the point, of course — that these manly men are leaning on privilege more than merit and will fold under intense scrutiny — but more texture there might have allowed the ladies to flex more muscle and create more drama. Domhnall Gleenson is a bright spot; he and Moss have an intuitive physical chemistry that comes alive during a darkly hilarious bathtub surgery scene. It’s one of the only moments in The Kitchen that doesn’t feel aggressively staged or performative, a reminder that all four of the film’s leads are very talented people deserving of better material. Speaking of the material, it’s not surprising to learn that The Kitchen started as an eight-part comic series. It often feels like plot threads were condensed or lifted from the film entirely, which makes the already shaky tonal issues that much more of a problem. It might be interesting to see The Kitchen given some room to breathe as a television series. 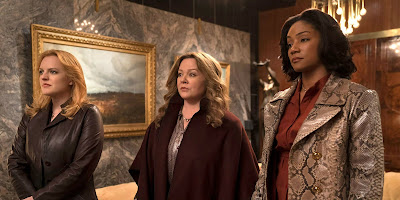 There’s no real pleasure in giving The Kitchen a middling review. It’s an earnest attempt at a serious crime drama featuring actors trying to stretch their range and do something important. It has a message worth hearing delivered by people worth listening to. It wants to explore something familiar from an unfamiliar angle. Everyone involved with the production is talented and worthy of your attention. It just never really lands the tone or characters as effectively as it might have. It’s uneven. It lacks confidence. It’s stodgy and clunky and overwrought, often missing opportunities for resonance for the sake of genre authenticity. With all that in mind, it would be incredibly encouraging to see a film like The Kitchen do well commercially and open the doors for further female directors, female-led genre films, and non-superhero comic book adaptations. There’s a wealth of great stories among them that deserve more mainstream appreciation. Three of them are inside The Kitchen, but each one could do just a little bit better.
Posted by Patrick Bromley at 5:00 AM