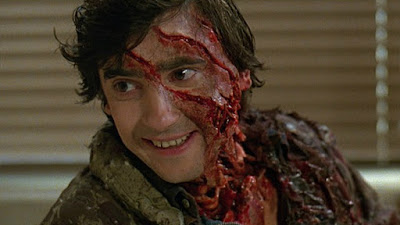 Can I have some toast?

Though Rick Baker would win the first Academy Award for Best Makeup for his groundbreaking work on An American Werewolf in London, the film was not well received when it was first released in 1981. Critics and audiences alike were taken aback and puzzled by the film’s mix of comedy and gore. Gary Arnold in the Washington Post called the film “slack and uncertain.” Dave Kehr, writing in the Chicago Reader, called the film “a failure.” Roger Ebert of the Chicago Sun-Times suggested that the film seemed “curiously unfinished, as if director John Landis spent all his energy on spectacular set pieces and then didn't want to bother with things like transitions, character development, or an ending.”

These men were wrong. Time has been good to the film; a recent viewing confirmed that the film holds up remarkably well (AWIL celebrates its 40th birthday in only two years!) and, in fact, is timeless. Like hundreds of other classic films that did not receive their due when first released, AWIL now stands as a classic of its genre.

A big part of its artistic success is due to Griffin Dunne’s funny and painful performance as Jack. Though really only in four scenes in the film (the extended opening scene on the moors and his subsequent three meetings with David), Dunne’s character functions as both the film’s comic relief and its moral center. This is a tricky combination to pull off, but Griffin Dunne is more than up to the challenge. What’s even more remarkable is that this was only Dunne’s fourth film performance. 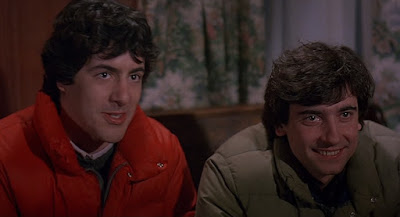 What’s more, Dunne’s performance must compete with one of the more elaborate and potentially distracting make-up jobs in film history. In the “Making Of” documentary, Beware the Moon, which accompanies the special edition Blu-ray of the film, Dunne remembers being depressed when he saw the final make-up for his first scene as a corpse; he thought it so repugnant that audiences wouldn’t be able to look at him, much less enjoy his performance. The make-up is grotesque and wonderful; Rick Baker pulls of the difficult trick of creating negative space in Dunne’s neck so we see what appears to be his windpipe poking out of all the gore. (Several people in the documentary, including Baker, Landis, and Dunne, point out that audiences tend to fixate on one piece of loose, jiggling skin hanging from Dunne’s ripped-up cheek in this scene. They are right!)

A TIDBIT OF TRIVIA: Landis reveals that the MPAA nixed a scene where Corpse Jack takes a bite of David’s toast and we see the tidbit fall out of his windpipe and onto the bed when he swallows!

But Dunne never lets the make-up swallow him up. His bright, disarming performance stands in funny contrast to his grotesque visage. It helps that Dunne is given a lion’s share of the film’s funny lines: asking for a piece of toast off David’s hospital tray, explaining that talking to a corpse is boring, and later ogling David’s new girlfriend as she sleeps unaware in her apartment. Dunne triumphs as the undead because he is never quite undead; he’s the same Jack we saw earlier in the film. Dunne’s comedic timing is impeccable. It’s a performance that should be studied by young actors trying to better their craft. 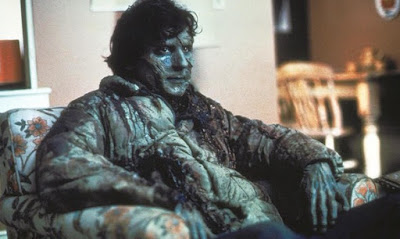 The comedic heights of Dunne’s performance stand in stark contrast to his function in the second part of the narrative. As funny as Jack can be, he is the moral harbinger of the film, reminding David that he is responsible for horrible murders and that he must end his own life. This is a tough balancing act, but Jack never looses the audience’s sympathy or comes across as a garden-variety ghoul.

This proves to be difficult because in each subsequent scene, Dunne’s make-up grows more grotesque, first turning green and then becoming a flesh-draped skeleton. I was so happy when I learned in the special features that, when a sophisticated puppet takes Dunne’s place for the final stage of Jack’s decay, it was Dunne both operating the mouth and recording his audio live during filming of this sequence. This certainly qualifies “Puppet Jack” as part of Dunne’s performance, and it’s seamless. The special effect never comes across as a mere puppet, but as an extension of Jack because of Baker’s expertise and Dunne’s vocal performance. 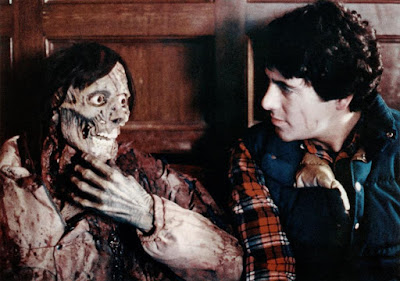 Though I tend to disagree with almost every decision made by the Academy of Motion Picture Arts and Sciences since 1929, they were clearly in the right to give the first Best Make-up Oscar to Baker in 1981. (He would go on to win an additional six Oscars in this category.) I wish the Academy would have gone a step further and nominated Griffin Dunne for Best Supporting Actor. He clearly would have faced stiff competition at the Oscars that year, and sure, sentimental favorite John Gielgud would have still won for his comic turn in the now unwatchable Arthur. But does anyone even remember the film Only When I Laugh? Good Christ, the film received THREE acting nominations: Marsha Mason, James Coco, and Joan Hackett. I would suggest Dunne’s nomination should have taken Coco’s place. Sorry, James.

In American Werewolf in London, Griffin Dunne gives a performance for the ages. It’s the perfect synergy of script, performance, make-up, and cinematography. It’s a great horror performance.